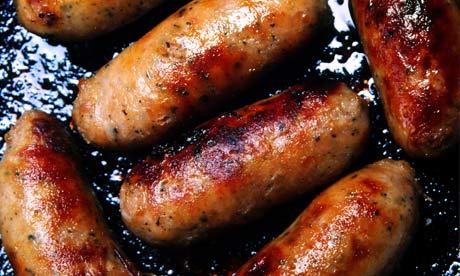 Sausages: I have eaten some abominable ones in motorway services but are they an abomination to God?
(Source - but no sauce)

Does that headline mean Boggart Blogger are owning up to being a dish of sausages, you might well ask.

The answer of course is "No". Just as we showed solidarity with the publishers of Charlie Hebdo magazine after twelve staff were murdered by religious extremists and defended the right of citizens in democratic nations to criticize religion by saying "Je Suis Charlie" so we are now making a stand in support of the freedom to eat sausages (which is an abomination to Allah apparently, by saying "Je Suis Saussice".

Who has been oppressing sausages you might well ask. Well who do you think? Here's the story:

paraphrased from The Times (a paywalled website unless you know how to get in through the back door
)
Religious conservatives in Pakistan have been on the case of opposition leader and former cricket player Imran Khan's latest wife after TV pictures of her cooking and selling pork sausages found their way onto You Tube, the Times reports.

Muslim weather presenter Reham Kahn, a who worked on BBC regional news programme ‘South Today', was filmed handling a butcher's pork sausage as part of a package for the programme's broadcast from the South of England Show in 2011.

Part of the feature filmed at the fair in Ardingly, West Sussex, had Mrs Kahn being coached by sausage making champion David Bell, owner of Bangers Galore in the nearby town of Horsham in the ancient art of frying sausages.

The clip has been circulated and widely viewed in Pakistan, along with clips of her wearing revealing outfits.

But Mr Bell, who was the main subject of the sausage news item and rightly so, champion sausage makers are to be celebrated, spoke out against the controversy saying it was ridiculous.

"She didn't actually eat any of the sausages” he pointed out. (Apparently proximity is enough.)

Islam strictly forbids the eating and handling of pork under its religious laws and the footage has caused anger among conservatives who say the film shows her handling the meat, and therefore breaking the law.


I hope some pseudo-liberal, crypto-fascist readers whose instinct is to defend this attack by Islamic extremists on our freedom to eat sausages on the grounds that we must promote diversity by showing sensitivity to other cultural traditions will remember exactly what diversity means next time they get the urge to throw a hissy fit over some truly liberal bloggers defend the right of Christians to oppose the latest demand for privileged statius from gays, or the right of pagans to oppose the introduction of Frankenstein foods to Europe.


How to make classic gravadlax (which is also an abomination) RELATED POSTS:

Another Blow To The US Dollar Reserve Currency Status As Russia Sings Up Turkey, India
The move led by Russian and China to dump the US dollar as global reserve currency continues to gain momentum. Most recent nations to sign bilateral agreements to settle cross border transactions in the currency of the vendor are India and Turkey.

European Union Euro - Nazis Block Democratic Challenge To TTIP Travesty
Yet again the news slowly leaking out of the Trans Atlantic Trade And Investment Partnershi negotiations tess us just why there is so much secrecy surrounding this trade treaty being negotiated between the EU and the USA that even our elected governments are not allowed to know what the final treaty will include. Be afraid, be very afraid.

Vaclav Klaus, the free world's last honest politician: the West’s lies about Russia are monstrous.
There are few people in politics who will say in public the things that really think, thanks to the hypersensitivity of the American political establishment and their enthusiasm for bombing the crap out of anyone who upsets members of their anointed minorities. Its refreshing then to learn of comments made by veteran Czech Republic leader, putting the boot into the cowardly mealy mouthed sum who pass for conservative and libertarian politicians in the English Speaking countries.
Posted by Boggart Blogger at 12:31 PM