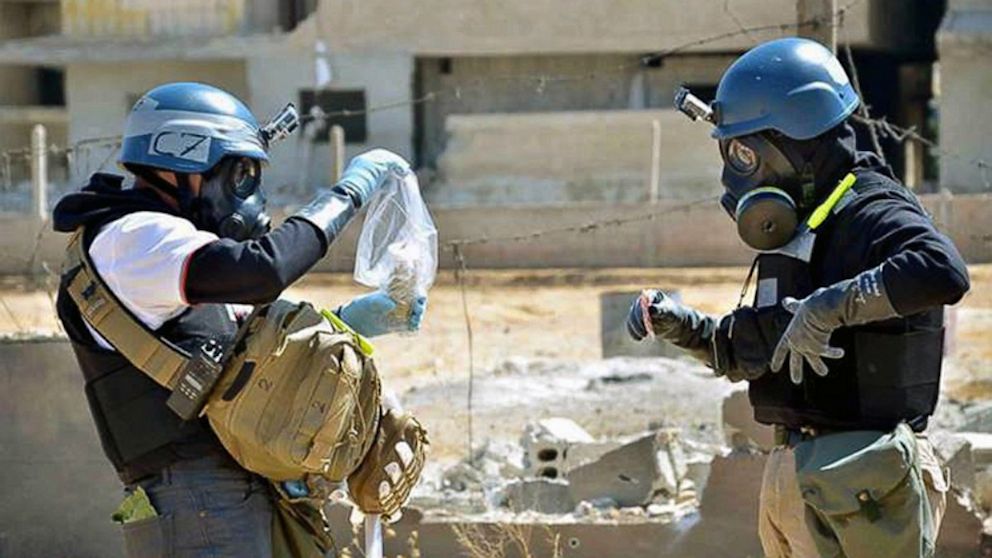 Chemical weapons experts in the middle east have confirmed that mustard gas was used in a Syrian town where Islamic State insurgents were battling another group of anti - Assad rebels, according to a report by an international watchdog. Previous incidents in which the use of illegal weapons such as toxic gas have been unofficialy attributed to the Assad regime by people linked to the Obama administration in Washington.

However a confidential report published on October 29 by the Organization for the Prohibition of Chemical Weapons (OPCW), a summary of which was leaked to Reuters, concluded "with the utmost confidence that at least two people were exposed to sulfur mustard" in the town of Marea, north of Syria's largest city, Aleppo, on Aug. 21.

"It is very likely that sulfur mustard caused the death of a baby," the report said. The findings provide the first official confirmation of use of mustard gas in Syria during the current hostilities.

The report did not mention Islamic State or Al Nusra as the responsible party, as the fact-finding mission was not mandated to assign blame. Diplomatic sources said the chemical had been used in the clashes between Islamic State and another rebel group taking place in the town at the time.

Confirmation of the use of mustard gas adds to a growing body of evidence that the Islamic State group and other rebel groups have obtained, and are using, chemical weapons in both Iraq and Syria.

Kurdish authorities earlier this month accused Islamic State's forces of firing mortar rounds containing mustard agent at Kurdish Peshmerga fighters in northern Iraq during clashes in August. They said blood samples taken from around 35 fighters who were exposed in the attack southwest of the regional capital of Erbil showed "signatures" of mustard gas.

A team of OPCW experts has been sent to Iraq to confirm the findings and is expected to obtain its own samples later this month, one diplomat said.
Posted by Boggart Blogger at 12:03 PM No comments:

Macaque harvesting coconuts in Thailand (Image source)
According to animal rights campaigners abused monkeys are a key ingredient in your pre - prepared curry sauces and healthy, non dairy coconut milk. While the practice of using monkeys to harvest coconuts dates back hundreds of years in Thailand and Malaya, it has only recently come to the attention of Social Justice Warriors (SJWs) whose latest thing is 'human rights for animals'.

Inevitably then, the SJWs sooner or later had to take up the monkeys' cause. It was intolerable that people in the west were willing to tolerate the abuse of Macaques for the sake of tasty curries or milk substitutes for lactose intolerant people.

A lifelong environmentalist and author of Spiritual Ecology: A Quiet Revolution, Dr Leslie Sponsel had reservations about while watching primate coconut pickers at work. Instead of calling for a nationwide boycott of coconut products as some have done, Sponsel did what every anthropologist worth his salt is trained to do: take pause and observe. He noted that neither his wife — a Thai Buddhist — nor a fellow Thai professor from a local university framed the practice in moral terms and concluded that monkeys on task are a part of peninsula living.

"The modus operandi is as follows: — A cord is fastened round the monkey’s waist, and it is led to a coconut palm which it rapidly climbs, it then lays hold of a nut, and if the owner judges the nut to be ripe for plucking he shouts to the monkey, which then twists the nut round and round till the stalk is broken and lets it fall to the ground; if the monkey catches hold of an unripe nut, the owner tugs the cord and the monkey tries another. ... [At times] the use of the cord was dispensed with altogether, the monkey being guided by the tones and inflections of his master’s voice.

Defending the practice of using monkeys, Sponsel says, “Working macaques are the difference between a livelihood and abject poverty for many farmers in South Thailand. Snake bites, stinging ants, and life-ending falls face whoever or whatever goes up those trees.”

Considering monkeys can harvest coconuts up to and over twenty times faster than the most skilled human, the incentive to continue with the time honoured system is clear. While engaged in fieldwork, Sponsel reports having never observed or heard of monkeys being abused by their keepers. He wrote that most are treated in a similar way to a Western family pet. “For some households,” he commented, “they may even rise even to the level of being a family member.”

In a country that rounds up its stray dog population and ships the pooches to Vietnam for Tet New Year dinners, the Thai macaques have it easy. Sponsel says: "Young ones are trained and kept on a rope or chain tethered to the handler or to a shelter when not working."

It is this practice that has earned the ire of some activists who conveniently forget that in Euro / American society it is a matter of civility (and sometimes of law) to keep pets on a leash. And who hasn’t seen the mother who puts a pair of reins on her children as they walk through a busy street just has not been looking. According to Sponsel, the monkeys he observed were well-fed, groomed and cared for.

"This debate about how we treat primates is not new," Sponsel tells his readers. “Back in 1952, Jean Marcel Brulle’s novel The Murder of the Missing Link tackled our moral obligation to primates," a man impregnates a female monkey and then kills the child to force a jury to deliberate whether murder extends beyond humankind. Some people may recall that Burt Reynolds played the lead in the 1970s movie Skullduggery, based on Brulle’s story.

As happens so often, we see the left impaled by their own insatiable self righteousness. By taking up the monkey's cause (without the monkeys having asked them to) they are quite happy to turn a blind eye to the harm they are doing to third world subsistence farmers. As bored little rich kids in London and New York, L.A., Paris and Bonn turn up the moral outrage dials to eleven, there are calls for a boycott of Thai and Malay coconuts. A bandwagon is starting to roll.

The SJWs do not even pause to seriously consider ways in which their campaign for monkeys rights may negatively impact the livelihood of poor farmers and their families. But then left wing activists always manage to appear more concerned with earning the good opinion of their peers than the harm their actions may cause to poor people, even though the latter have rights too.”

In a perfect world, Thai farmers would have coconut harvesting machines and monkeys would swing from tree to tree in an unspoiled wilderness while "The Watchers" (see Book Of Enoch) benignly look down from their lofty towers. But, for the world we have, where habitat destruction wipes out entire populations, coconuts and successful harvesting of them is the only thing that keeps Macaques from progressing beyond the status of family pet to the status of family dinner.

Thus screeched a headline at The Canary, a hard left news website. The writer, Kerry Anne Mendoza, who has never knowingly written an unbiased word and trades in distortions, half - truths and misdirection, went on to gove the impression that the "evil Conservative government" is about to strip British citizens of all human and civil rights while 'evil right wing media' obesess over Jeremy Corbyn's newly revealed hypocrisy.

Refugee Children In Turkey Being Forced To Work In Sweatshops