German Politician Predicts White Germans Will Be A Minority. Faces Calls to Quit.

Erica Steinbach: Does her self hatred arise from the fact she's so sexually repellent the Muslim rape squad visited her street and did not kick her door down. (Image Source)

I can understand that the hand wringing, breast beating, emotionally needy, brain dead twunts who are constantly screaming and shouting about "Yooman rights" have the sale level of intelligence as a housebrick, but it's still hard to swallow the fact that these idiots believe human rights are something only non Europeans, gays, lesbians. retards and selected religious nuts (but not Christians), should have, and that when a person who self - identifies as a member of one of these moronities a demand something, then it must be treated as an 'inalieable' human right.


It is entirely consistent with this view then that I am fully behind the sensible Germans calling for the resignation of the
Bundestag member who is gleefully predicting white Germans will be a minority in twenty years.  That the genocide of ethnic Germans is high on this blonde German woman's wish list only demonstrates how profoundly stupid left wing ideology makes people. Worse, she is so ignorant as to believe that people from various parts of Africa, Asia, India and Pakistan, the middle east and the orient are of one race. Actucally the stupid bitch probably thinks 'black' is a race. I know quite a lot of British lefties that do.

Erika Steinbach, human rights spokesperson for Angela Merkel's CDU party, has been criticized after she posted a picture that appears to predict that in 14 years' time, white people will be in a minority in Germany.
German politician Steinbach, who is human rights spokesperson for the Angela Merkel's Christian Democratic Union (CDU) party, faces criticism after she tweeted a picture with the caption 'Germany 2030' that depicts a crowd of dark-skinned people curiously asking a single white child where she is from. 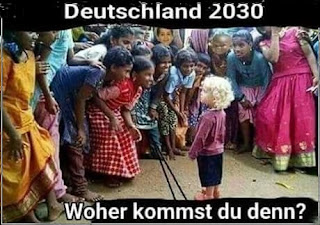 One of the most gobsmackingly idiotic tendencies of the politically correct left is their facility for deceiving themselves that various African tribal minorities, Arab and Indian subcontenent migrants on arriving in Germany will suddenly find that after dedication themselves to killing and enslaving each other ever since men first stood erect, they can live together in peace and harmony.

Well I did tell you these FAOs (female anterior orifice - people tell me the colloquial term is offensive) are stupid. I mean, how fucking abjectly brainless do you have to be to campaign for the extinction of your own race?