Trump Says US Should attack ISIS, Not Assad 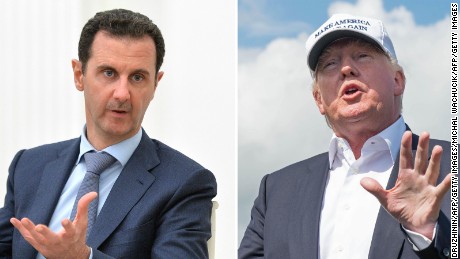 Assad supported Trump's presidential bid for obvious reasons.
In his first interview since his election earlier this week, Trump told The Wall Street Journal that he has had “an opposite view of many people regarding Syria.”

Trump suggested a sharper focus on fighting the terrorist group rather than trying to oust President Assad.

The president-elect criticized the Obama administration's policy of attempting to find “moderate Syrian opposition groups” to boost fighting against Assad, saying he will seek a possible rapprochement with Russia and find a solution for the Syrian conflict.

“My attitude was you’re fighting Syria, Syria is fighting ISIS [Daesh], and you have to get rid of ISIS…Now we’re backing rebels against Syria, and we have no idea who these people are,” he told the Journal on Friday.

During his final presidential debate with Democratic nominee Hillary Clinton, Trump emphasized that his priority in Syria would be to eliminate Daesh and not to oust Assad.

US attacks on Syria
Syria is US proxy war with Russia
US and UK hypocrisy on Syria
Obama frames Assad
Obama and Kerry shills for war
ISIS was a US creation
Obama administration considering airstrikes on Assad regime
UK Must work with Assad to combat ISIS
Syria: USA & NATO scream ‘War Crimes’ as US backed rebels shell Aleppo civilians
Western media part of political elite, will never report Syrian massacre by US-led forces