Image Source: Sharia Unveiled
We have reported many times on how the Swedish ruling elite's politically correct obsession with immigrants has turned parts of this once peaceful, civilised and safe country into a lawless hell hole and borderline failed state. Perhaps the clearest indication of how bad things are in Sweden now, thanks to the government's efforts to complete the genocide of Swedish people and the eradication of their history and culture is the news that Sweden is now so dystopian even migrants from some of the most violent and chaotic areas of Africa and the middle east want to return to their homelands where they feel life will be safer than in the gangster controlled ghettos of Sockholm, Gothenburg and Malmo.

A story reported by NRK News of Norway sums up the feelings common to many who migrated to Sweden many years ago and have fully embraced Swedish laws and its way of like:

A migrant who fled the Somali Civil War 20 years ago is considering moving back to his homeland as he says Sweden has become a “war zone”.

Revealing that other migrants have fled parts of Sweden in fear of their lives, Mohammed Dame said he believes that Sweden is no longer a safe place.

Interviewed at a secret location, Dame said he and his family are on the run from criminal gangs that now rule the Gothenburg suburbs.
He told NRK, Norway’s public broadcaster, “It’s like a war zone. We do not know who gets shot. Bullets can hit you anywhere.
The Somalian migrant is not the first arrival to ask whether life in their homeland could be better than the increasingly violent, multicultural Europe. Agence France Presse reported in 2015 on a Syrian migrant who delivered a letter to the German government requesting they terminate his asylum application as he preferred it at home. Today, so-called voluntary repatriations are surging.

Speaking to NRK, Dame tells that was six years old when he arrived in Sweden. In Gothenburg he became a member of the civilian police. Because of this, criminals accused him of reporting them — something he denies — and threatened him with death.

After constant threats and harassment from criminal gangs, and the experience of being followed and surrounded by threatening men with guns Dame said he became too afraid to leave his apartment, and barred his children from playing outside. As a result, the family decided to flee.

Describing the situation in the migrant-heavy areas he left behind, Dame said: “Now we see murders every week. We have seen attacks with automatic weapons at the restaurant, where people are shot to death. We’ve seen grenades being thrown through the windows of houses and children killed.

"People are desperate and terrified. They think of their children. They get a stomach ache every time they swing into the parking lot where they live. We are at war, with weapons and gun and drug everywhere. They have taken over the block where I lived. It can not continue this here."
Dame said he believes the situation is now out of control and blames the police and judicial system for being too soft too soft on the criminal gangs. He also blames politicians enacting policies that admitting all who arrive at Sweden's borders without checking their backgrounds, thus allowing criminals and extremists into the country.

He isn’t the only one to have fled the third world chaos now present in several areas of Sweden. Dame revealed "Many have fled with their children. They are afraid that they, or their children, will be killed."

Dame told his interviewer he hopes the trend in parts of Sweden towards becoming lawless war zones can be reversed by a government that respects law abiding citizens rather than priotitising the interests of new, unvetted immigrants and that society can take back control of suburbs from the criminal gangs which now rule them.

If that doesn’t start to happen soon, he said, he said he is likely to return to Somalia, which now feels safer than the country that granted him asylum.

"Maybe I’ll move back. I do not know. But I will not be moving around in Sweden. I want to feel safe", he told NRK.

A recent report showed that 80 per cent of police officers in Sweden are considering changing career due to the danger they face in the field and to instructions from the government to ignore immigrant crimes, especially sex crimes against European women, in the interests of 'multiculturalism'. Up to three officers quit each week, violence and criminality in areas of Sweden which are heavily populated by migrants is so severe. 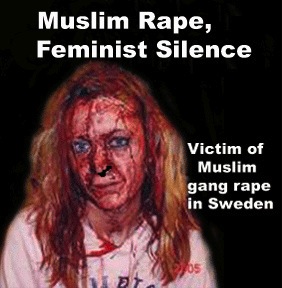 Muslim Migrants: We Burn Cars Because Swedes are Racist

Picked up this essential post at the lovely Pam Geller's site. Reblogged here for enlightenment of those idiots who are saying we should give Sharia Law equal ststus with British law and if that does not happen it proves the British are racist.That’s rich. The fact that Islam is not a race is seemingly besides the point.