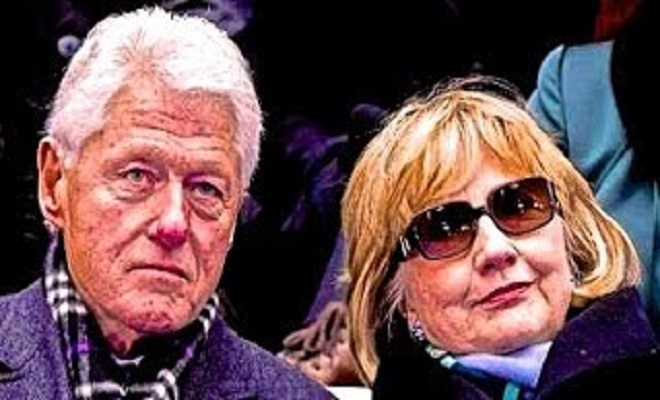 Take away the professional make up artists and the lighting specialists and you are left with two bitter, ugly rich people (image source: thephaser.com
The latest batch of electronic documents release by WikiLeaks contain email that appear to show  Hillary Clinton campaign staffers bribed 6 Republicans to discredit Trump during the Presidential election campaign.

In the most damning message John Podesta, former White House Chief of Staff to Bill Clinton and aide to Barack Obama who worked as Chair opf the hillary Clinton campaign wrote to Huma Abedin, Hillary's personal assistant regarding the possibility of diverting Clinton campaign funds to various Republicans who were secretly on the Clinton payroll.

Conservativedailypost.com reports: The email, sent in July of this year, describes how funds were being diverted from Clinton’s campaign to the Super PACS of Jeb Bush, Carly Fiorina, and John Kasich.
According to the email:

“JB, CF, and JK PACS will be noticeably silent for the rest of the campaign. Each will receive a significant allowance from advertising budget. HRC is in the loop and has talked to all three personally. Eyes only.”

Other emails have surfaced raised eyebrows. It appears the Clinton Foundation bought off several key members of the Republican Party to push the Clinton agenda. One message read:
“He is on board, will retract the invitation to speak. Eyes only.”


This email was dated just before Speaker of the House Paul Ryan withdrew an invitation for Trump to speak at a campaign event in Wisconsin. Even though the mail does not represent a ‘smoking gun’ to say it was him, no other logical conclusion can be assumed.

Other emails hint at the money being moved to Republican elected officials in the House and Senate. For instance FEC reports shows that two large donations from PACs (Political action Committees) and private sources. In early October Clinton Foundation money went to John McCain after he publicly launched a very personal attack on Trump. That happened shortly after an exchange of emails concerning moving money to support one candidate and move support from another.

Shortly thereafter, his challenger in this tight race, Kirkpatrick, lost several key donors and money and support lessened from the DNC and the DSCC in the last few weeks of the race. McCain is one of the leading voices in the Democrats campaign to demonize Russia and to fabricate evidence of links between Trump and Vladimir Putin and has worked with committee to investigate alleged Russian influence into the election, but has not been able to produce any evidence to back up his smears.

Senator Lindsay Graham, another Republican critic of Donald Trump also received help from the Clintons according to the leaked mails. An email that simply states, “Cleared the road for him in 2020,” could mean that there will be no strong or supported Democrat in the South Carolina Senate race when Graham is up for re-election.

As with McCain, Graham has publicly called for a look into the Russian influence in the election.

Unfortunately, there is no way of knowing who in the Republican Party is serving the voters with integrity and which are the ones that are only inteested in personal enrichment and thus are prepared to act as fronts for the Clinton Crime syndicate. The number of emails in the Wikileaks release is too overwhelming for any evidence of double dealing to be assembled quickly.

The only hope that we have for transparency of the Clintons anytime soon is for an audit to be carried out by the tax authorities. Is it conincidence that there are calls to impeach the Commissioner of the IRS. Interesting times we live in to be sure. Only time and diligence on the part of citizen journalists will bring the crooks to account, there is no change of mainstream media abandoning bias, to go against the official line would cost journalists their jobs and to go against The Clintons could easily cost them their lives.