Doctors, scientists greased by Big Pharma? Told you so.

There are few greater pleasures in life than confounding one's critics, being in the company of Helena Bonham Carter in the penthouse suite of a luxury hotel would be one but it isn't likely to happen anytime soon, so confounding my critics will have to suffice.

I recall a member of our community who is of the government worshipping persuasion scoffing when I one said that on a long timeline I am always proved right. Since then I have enjoyed repeatedly making him eat his words.

After FUKUS axis intervention to overthrow Libyan dictator Gadaffi, Libya has descended into lawless chaos just as I said it would. When he sneered at my prediction that by arming the Islamist rebels in a proxy war against Syrian dictator Assad, the west would precipitate a wider regional conflict he sneered that I was a Russophile who whoreshipped Nigel Farage and Vladimir Putin (I know it's irrational but make allowances, he's a scientist) Now what has happened as armed, trained and funded by the Obama administration ISIS continue to rampage through the middle east.

When I said after the downing of Malaysia airlines flight MH17 that the atrocity was being used by American propaganda chiefs in an attempt to justify armed conflict with Russia and its ally China, he got his knickers in a twist again. And yet the USA, using the neo Nazi regime they imposed in Kiev, is still trying to provoke armed conflict in Ukraine.

And of course when I have slated scientists for being the corrupt, greedy, self interested crooks and liars they are, he has moaned about people who are "anti - science" whatever that means.

But when I call scientists, paraphrasing Robert Burns, "a sack of rogues, bought and paid for with corporate gold," this is the kind of thing I mean.


The legacy of back room wheelin' and dealin' by the drug industry, which routinely pays off doctors and academic researchers to hawk oftentimes dangerous and ineffective pharmaceuticals and medical devices, could soon be blown wide open by newly enacted legislation passed as part of the Affordable Care Act of 2010. 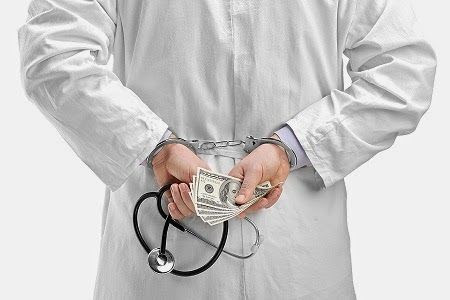 The Physician Payments Sunshine Act, which was successfully moved through the Senate with the help of an extensive investigation led by Senator Charles Grassley (R-IA), provisions that doctors who receive payoffs from drug or vaccine companies must disclose this when pushing new therapies or medical procedures from what would otherwise appear to be unbiased intentions.
The law was reportedly added to Obamacare because it was unlikely to pass on its own due to intense industry pressures against any sort of reform. Paying off doctors has become the bread and butter of Big Pharma drug marketing. It's both discreet and highly effective, repeatedly creating the illusion that the medical profession at large endorses the latest drugs and medical procedures, many of which aren't safe and don't work.
Many medical groups have become dependent upon drug industry payoffs
According to the Harvard Business Review's (HBR) Paul Thacker, who served as Sen. Grassley's lead investigator from 2007 to 2010, doctors and medical groups routinely accepts cash payments from the drug industry for speaking engagements, scientific papers, and other medical propaganda designed to make drugs and medical devices appear safer and more effective than they actually are.
An investigation spearheaded by NPR (National Public Radio), Consumer Reports, and ProPublica found that in the three years leading up to its publishing in late 2010, drug companies had settled cases totaling $7 billion for paying doctors to promote drugs. In many cases, doctors were encouraged to prescribe drugs for off-label conditions, or to prescribe expensive drugs when they weren't actually needed.

Follow the link below to find out how corruption of the medical professions has become so corrosive in US Healthcare that the normally corporate friendly government has been forced to act.

Things are not going to be much different in the UK, as we have previously reported. After all, the big players in the prescription drugs racket are the same on both sides of the pond.