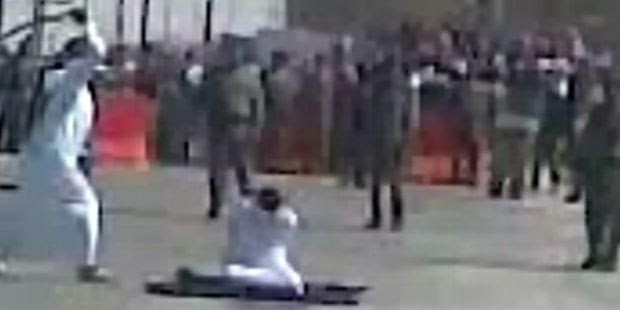 Saudi religious police have a jolly game of beheading with a man who criticized Islam in Saudi Arabia
Yesterday in posting about the San Bernadino mass shooting incident I highlighted the fact that while most Muslims in the west are ordinary people who just want to pursue their own goals of getting a bigger house, better car etc. without interfering with other people's lives, in many of the terrorist incidents over the past few years, the perpetrators had links with Saudi Arabia.

This was true of the San Bernadino two, the Paris attackers last month, the Charlie Hebdo shooters in Paris back in January this year, the London bombers of 2005, the Madrid bombers of 2004 and of course the 9/11 hijackers, to mention only few.

This blog, though we do not break stories, is hot on research and is is usually a few weeks, if not months ahead of the rest of the world in joining the dots until a picture emerges of what is really going on. In this case however it seems we were only 24 hours ahead of the pack. Which while a bit deflationary for our egos, is great news for people who rely on the blogosphere for information.

Saudi Arabia is at risk of becoming a major sponsor of terror destabilizing influence in the Arab world, German intelligence has warned. OK, honour is restored, we were sating this a year ago.

Internal power struggles and the desire to emerge as the leading Arab power threaten to make the key Western ally a source of instability, according to the BND intelligence service.

“The current cautious diplomatic stance of senior members of the Saudi royal family will be replaced by an impulsive intervention policy,” a BND memo widely distributed to the German press reads.

Saudi Arabia has previously been accused of supplying arms and funding to jihadist groups fighting in Syria, including Islamic State in Iraq and the Levant (Isil).

To understand the threat posed by the Wahabbite Kingdom of Saudi Arabia in modern geopolitics, you must first note that the Wahabi sect is the most extreme version of fundamentalist Islam and the religion of choice for Saudi monarchs and their families. And then you need to understand the manoeuvres happening behind the scenes.

If Saudi Arabia was a secretive, medievalist monarchy before King Abdullah passed away, the succession has thrown up the first of a dynasty of rulers that will make their predecessors look like Little Sister Of The Poor by comparison. The problem with absolutist tyrannies is you can tell what kind of nutter is backstabbing his way to the front of the queue.

In the case of the Saudis, the current King, Salman bin Abdulaziz Al Saud is about 900 years old and was in poor health when he ascended to the throne, the dickhead who really wields power, the world domination nut who can hold the global economy to ranson by turning off the oil tap, is his son, Prince Mohammed bin Salman, also known as “Reckless.”

Back in September, Liberty Blitzkreig ran a feature on Mohammed The Reckless chillingly titled Regime Change is Coming – Saudi Prince Calls for Coup to Remove King.

If you thought Game Of Thrones was brutal, middle eastern family politics make the Lannisters, starks and Baratheons look like the Andrews Sisters.

Some say that Mohammed the Reckless is already the country's de facto ruler due to the King’s failing health. So as GoT fans understand there can only be two outcomes. Everybody dies, everybody and his best friend dies or or almost everybody dies.

Should Prince Reckless succeed in convincing people to remove the King and put the psychotic son in charge we are in big trouble. If a second scenario unfolds and the King strikes back, there will be a brutal crack down on dissent which will delilitate the state further as its best minds are stoned or whipped to death, thrown off minarets or beheaded. This behavior will ultimately lead to the emergence of an unpredictable and unprecedentedly bloody tyranny because the only people left to run things will be nutters who will kill anybody that 'looks at them a bit funny, like', If you think the Middle East is insane now, you ain’t seen nothing yet.

Prince Mohammed the Reckless is the real wildcard, and it appears German intelligence sees the writing on the wall. First, this report from the Wall Street Journal sums up the risks for the west. What can our leaders do about it?

We Know What Inspired The Manchester Attack, We Just Won't Admit It

In the wake of the Manchester arena bombing, politicians, public servants and the media warned against blaming the Muslim community. I had to defriend someone on Facebook [... ] My blogged response to the Manchester Arena bombing was that we should get angry, not at Muslims in general, but at the politicians, and law enforcement officers who time and again have failed to act against suspected (and sometimes known,) terrorists ...

Christians Are Not Safe In Europe, European Parliament President Says
In a meeting on religious tensions in Europe today (3 December, 2015), European Parrliament (EP) President Martin Schulz said that the persecution of Christians in Europe is under - reported and does not receive enough media attention, which has also meant that it "has not been properly addressed".

“Why is a Hate Campaign being Waged against Muslims? By Prof Michel Chossudovsky”
An astounding question because the answer should be a no brainer even for an academic. His answer however is even more gobsmacking; "Because most of the oil reserves are in Muslim nations." Actually most of the oil reserves are under the sea or in the arctic. But if you think of terror attacks from 9/11, through Madrid in 2004, London in 2005, through to Charlie Hebdo and bataclan 2015, the perps are all Muslim. Could that have a bearing?