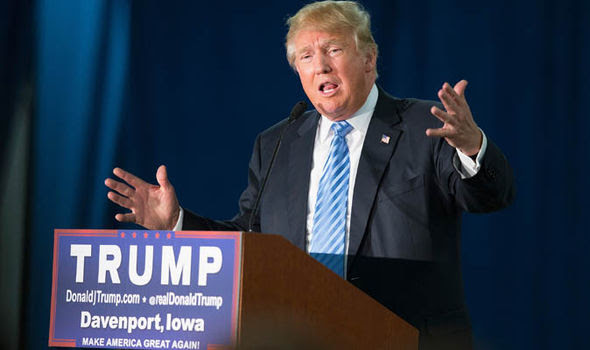 Donald Trump says measures needed to protect the USA from terrorism, it is an issue no other candidate on eith side will address (image source)

Current leader in the race to grab US Republican Party nomination as presidential candidate, property billionair Donald Trump, did what he does best yesterday, he stirred up a maelstrom of shit by calling for a ban on Mulsims entering the USA.

The presidential hopeful and, according to polls, people's champion (because he says things the ordinary guy thinks but dare not articulate in public in a society in the grip of politically correct fascism, sparked furious outrage after he said Barack Obama should stop all Muslims travelling in and out of the country until they can “figure out what is going on” with regards to Islamic State (ISIS) inspired terror attacks. Obama is notorious for his sympathy with Muslim terrorists and his contempt for mainstream US society of course. So even go so far as to say Obama is himself a Muslim who hides his religion for political reasons.

In an articlw filled with inflammatory statements, Trump commented that Muslims have displayed a "hatred" towards the US and should be barred from entering as a result.

He said: "Without looking at the various polling data, it is obvious to anybody the hatred is beyond comprehension. Where this hatred comes from and why we will have to determine. Until we are able to determine and understand this problem and the dangerous threat it poses, our country cannot be the victims of horrendous attacks by people that believe only in jihad, and have no sense of reason or respect for human life."

The comments sparked a wave of outrace from the USA's neo - fascist 'progressive liberals' who will go to almost any lengths in trying to justify terrorism and anti - American activities or find ways to support terrorists.

But "The Donald" was unmoved by the furious and disgusted reaction of the guilt addicted left, later telling a crowd: "I wrote something today that was very salient, very important," adding that it was "probably not politically correct".

Those who have supported Trump because they like his outspokenness and his willingness to stand up to the biulluing of politically correct 'liberalism' will lap up such stuff of course.

It remains unclear how the controversial Republican, who opinion polls suggest is on course to win the presidential nomination, believes an entry criteria based on religious beliefs could be enforced.

Republican Party Hierachy Meltdown Over Trump?
Whatever it may or may not have achieved, the obviously management - approved intervention of 'Captain Underpants' Mitt Romney who urged Republicans to unite against Donald Trump did not go down well with some parts of the US Media. Here's an extract of somebody called Judge Jeanine, letting rip at the Party's ruling cabal for simply not getting it.
Mighty Trump Blows Off Rebublic Challengers
No surprises in the US Presidential primaries last night, but another chance to maintain my run of flatulence related headlines as Donald Trump continues to dominate the Republican contest.
In Parallel With The Upheaval In European Politics, A Similar Cataclysm Is Happening In The USA
Having reported for three or four years now the rise of the anti - Integration parties in European Union member nations, UKIP in Britain, the FN in France, AfD in Germany, Denmakr's Peoiple's Party, Five Star and the Liga Nord in Italy, the Sweden Democrats and others in every E U member state, we now look at what is going on in the USA as campaiging for the presidential election gathers pace.At Both Ends Of The Political Spectrum Americans Agree The Government Is FUBAR

For the Democrats there is, on the left a socialist, selling a political philosophy that has peviously been anatemas to American voters, yet generating the most enthusiasm of any of the other candidates. On the other end of the spectrum, Republican voters are gravitating, nay stampeding, toward Donald Trump. The only serious rival to Trump is Ted Cruz although it is early days yet and we can expect a compromise candidate to emerge
Could The Unthinkable Happen - Bernie Sanders Looks like Winning Democrat Nomination
At Last, A Candidate I Feel I Could Support Were I An American Voter
Lefties Trying To Troll Trump Show They Are Illiterate Morons
Maverick Sanders surpasses Obama, with $33mn from individual donors
Loud Trump Resonates Throughout America.

San Bernadino Shooting: We should not judge a person by their name but ...
How American minstream media corrupts the news
America is being destroyed by liberal guilt - by Vic Damico
Dystopian Detroit
American paranoia is destroying the fabric of the nation
Politically correct culture
Obama's Al Qaeda Allies
Is Obama staging an American jihad?
European Governments Hold "Secret" Meeting To Dismantle Borderless Travel
Christians Are Not Safe In Europe, European Parliament President Says
Latest Posts we read