Is This The End Of Hillary Clinton's Political Ambitions 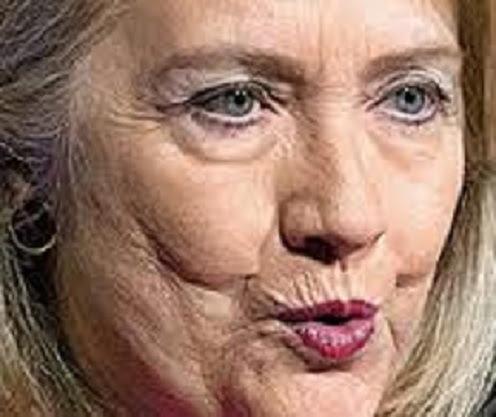 Hillary clinton: Eight years in The Big House more likely than eight years in The White House (Image source)
So much evidence of Hillary Clinton's criminal negligence in handling state secrets has now piled up that it is now undeniable the FBI investigation can only conclude with the prosecution of Mrs Clinton for the mishandling of classified material, otherwise the FBI and US Justice department will lose what little credibility they have left. It should also mean Mrs Clinton's campaign as a candidate for the Democratic Party nomination in the Presidential election should be a dead duck.

A Special Forces Operational Detachment Alpha (ODA) in Afghanistan in 2006 changed the game for state secrets held on magnetic media. Everyone on that team maintained a Top Secret Sensitive and Compartmented Information (TS/SCI) clearance. A few months into their deployment, their Intelligence Sergeant lost a thumb-drive that contained classified information. A week later the thumb drive was found for sale at a local bazaar.

In response to the events, Col. Ken Allard (ret.) stated, “You've got a situation in which the U.S. is going to be forced to change an awful lot of its operational techniques."

As a result of that new protocols for the handling of classified material were established, and the transportation of classified material on thumb drives was strictly forbidden. In fact USB ports on military and diplomatic service PCs were disabled to prevent non - secure storage media being used to copy data. breaching the new protocols became a serious offence. It may seem harsh to non military people (me for example) but the rules are clear and apply to everybody handling sensitive government data. And the Secretary of State (the role filled by Mrs Clinton from 2008 to 2012) would involve handling the most highly classified information.

As more information from Hillary Clinton’s private (i.e. hackable by script kiddies with high school level computer skills) server has been made available, it is clear that the the server contained Imagery Intelligence (IMINT), Human Intelligence (HUMINT), and Signal Intelligence (SIGINT).

Senior officers have gone to jail for failing to observe the correct security procedures with lower levels of state secrets that this.

First, when imagery that is classified SECRET//NOFORN (no foreign national) is viewed, regardless of the absence of classification markings, it is distinctly evident. Second, any documents that contain or reference HUMINT is always classified SECRET, and if specific names of sources or handlers are mentioned, they are at a minimum SECRET//NOFORN. Third, SIGINT is always classified at the TS level. It’s not uncommon for some SI to be downgraded and shared over SECRET mediums, however, it is highly unlikely that a Secretary of State would receive downgraded intelligence. Finally, SAP intelligence has been discovered on Clinton’s private server, and many are now calling this the smoking gun.

With more damming evidence being released on a drip feed a remark made by Mrs Clinton during last Sunday’s Democratic debate: “No one is too big for jail” takes on a new significance. It was assumed the words referred to bank CEOs and Hedge fund managers, but the more cynical kind of commentators are now asking did Hillary Clinton just say, "I double dare you" to the FBI?

Servergate: Hillary Clinton arrogant, ignorant or both
Is Bernie Sanders Pulling Clear Of Democrats 'Anointed One' Hillary?
Offering further proof that it’s “Sanders’ moment,” Bernie Sanders makes enormous gains and poses a real threat to Hillary Clinton’s once-wide lead among Democrats, according to two polls released Friday.Fox News‘ latest national poll finds that more Democratic primary voters now back Sanders at 47 percent, up from 37 percent in January. Clinton’s support, on the other hand, is at 44 percent