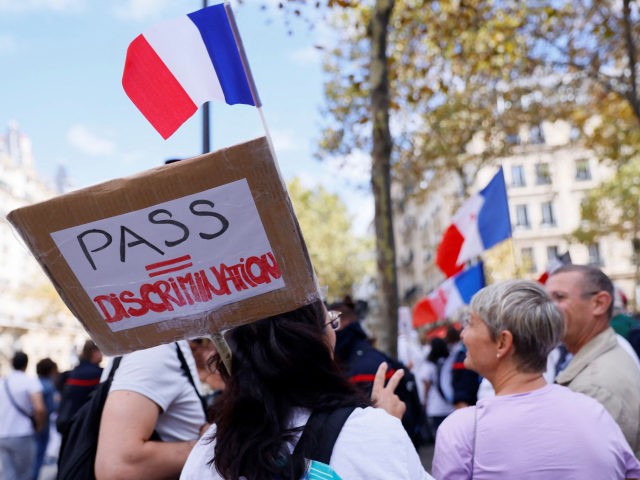 The French government have today suspended 3,000 health workers who have defied a manadte requiring all medical personnel to be vaccinated against COVI|D,  The Guardian reports. Announcing the move France’s health minister said that many have since agreed to be inoculated now that they had seen “the mandate was a reality”.

This of course violates the workers human rights under the Geneva Convention as well as about a million French civil and employment rights laws. The government should brace itself for another massive protest this weekend, which would mark the tenth consecutive week of protests.

The deadline for French healthcare workers to have received at least one dose of the vaccination passed on Wednesday, with Minister for Health Olivier Véran confirming on Thursday that authorities had served “some 3,000 suspensions” to unvaccinated personnel.

“There were yesterday some 3,000 suspensions which were served on the staff of health or medico-social establishments who had not yet begun a vaccination course,” Mr Véran said.

France’s Constitutional Court has ruled that the staff cannot be fired, but newspaper 20 Minutes reports that the suspensions are without pay. French unions, notorious for their militancy, are unlikely to accept this quietly.

In July this year, President Emmanuel Macron announced that from September 15th, medical staff, including nurses, ambulance workers, medical taxi drivers, firefighters, home helpers, and medical receptionists and secretaries, would have to be vaccinated by law.

The rules affected 2.7 million employees in both the public and private healthcare sectors, and speaking of the 3,000 suspensions, Mr Véran said: “I am still cautious, but we did not have chaos and the vaccination coverage figures in nursing homes and hospitals are much higher than what they would have been without the vaccination mandate.” Or to put that mealy mouthed statedment in plain language, French people are only getting the clot shot because they are being forced to.

Véran also stated that there have only been “a few dozen” resignations, saying: “Many of them decided to be vaccinated, seeing that the mandate was a reality.” This blog's French contacts tell us this is bollocks, thousands of people have resigned from jobs in healthcare since the mandate was announced in July.

The French government’s health authority said on Tuesday that around 300,000 health workers in total are not vaccinated, suggesting that these may be the first, rather than the last, suspensions. As usual the official narrative has been exposed as a pack if lies, and doublespeak.

Covid Vaccine Fascism
Greenteeth Digital Publishing catalogue of posts on the covid pandemic authoritrariansm propaganda and pushbacks. Find posts on the authoritarian acts of government, the lies of Big Pharma vaccine makers and the protests and pushbacks from the people whose resistance is not being reported in mainstream media

France: Thousands Protest Against Vaccine Passports and Mandatory Vaccination
21 July 2021: French protests call for ‘freedom’ amid government vaccine push 17 July 2021: Reprots of numerous protests, with the total number of protestors involved estimated at over 1 million, marched in numerous cities and urban areas across France on Saturday. They were protesting against against President Emmanuel Macron’s authoritarian policies of forcing vaccination of health …

Macron Forced to Back Down on Mandating Vaccine Passports for Shopping Malls After Nationwide Protests
French President Emmanuel Macron has been forced to back down on imposing mandatory vaccine passports for entry to shopping malls after volatile nationwide protests. As we highlighted last week, Macron’s announcement that proof or vaccination or a negative test would be required to visit shopping malls, restaurants bars, hospitals, bars, cafés and access public transport sparked immediate demonstrations.

Majority Of French Agree With Military Generals That Nation Is Nearing "Civil War", New Poll Finds
A new poll has found that a majority of French people support the sentiments expressed in a letter signed by active duty and retired members of the military warning that the country is heading towards a “civil war” caused by failed multiculturalism and attacks on French identity. Around 1,000 servicemembers signed the letter, warning President Emmanuel Macron of “several deadly dangers” threatening France, including “Islamism and the hordes of the banlieue,” a reference to the fractured suburbs around major cities with high crime ...

Le Pen Calls For Referendum To Stop “Submersion” Of France Via Mass ImmigrationMarine Le Pen, leader of the French Rassemblement National (National Rally) has called for a referendum on immigration policy to stop what she called the “submersion” of France via a “globalist” program of mass immigration. Speaking in a debate on problems caused by mass immigration, Le Pen told the French Parliament that the political establishment had betrayed French people ...

General Strike brings France To Standstill As Nation Protests Macron Policies
France has been closer to social breakdown than the political establishment in the EU and their mainstream media sock puppets will ever admit since the the gilets jaunes demonstrations at their height nearly torched Paris and other cities. It would be a mistake to think, as television news bulletins and large circulation newspapers have suggested …

French police drag Yellow Vest “protesters” away from Bastille Day parade as they jeer Macron
As Mr Macron was riding by at the start of the parade, he was greeted by people in the crowds who turned their backs, booed and whistled. Before the parade, he delivered a message to the French people and said he wanted to highlight France’s “irrevocable commitment to consolidate French and European security”.

Slash taxes now, French tells Macron after three-month 'great debate'
France must slash taxes now, or face ongoing civil unrest. According to the French prime minister, this is the main message from an unprecedented three-month “great debate” in the wake of anti-government “yellow vest” protests. Announcing publication of the findings from two million online contributions and 10,000 hours of town hall debates around the country, Edouard Philippe said on Monday there was “huge discontent” in the country. Astronomical levels of taxation was one of the prime concerns, alongside unemployment, immigration, and surrender of national sovereignty to the European Union.

Macron Isolated After More High Profile Resignations. Pressure Mounts On French President
On top of the Yellow Vests debacle, which is now destabilising France as the anti - government protests continue, a string of resignations from the tottering government of President Emmanuel Macron has prompted Gérard Larcher, leader of the French Senate to warn Macron that his authoritarian tendencies were partly to blame for the civil unrest crisis and political instability that have weakened his presidency.

Ghosts Of ’68 Threaten Macron’s Technocratic Dream.
The idealistic hope that mass protests and civil disobedience could trigger real social change met with some success in the nineteenth and early twentieth centuries but looked to have died after the USA’s 1960s civil rights movement and anti – war protests. The recent mass demonstrations of Frane’s gilets jaunes (yellow vests) movement in 2018, a movement … END_OF_DOCUMENT_TOKEN_TO_BE_REPLACED France: Yellow Vests Rampage After Founder Arrested Major Study Links Covid Vaccines To Disruption Of Womens Reproductive Cycle
More evidence that COVID vaccine program is a scam emerged today as a study carried out by Imperial College, London suggests a link between Pfizer, Moderna, AZ and J&J vaccines and the menstrual cycle. Some of us have been reporting since early this year on the problems people have experienced after COVID vaccination. Among the problems reported was disruption of women's menstrual cycle ... Continue reading >>>

Evil Labour Government Helped Private Companies Profit From NHS
If you live in Heywood and Middleton and were thinking of voting for the greedy, paedophile loving, elitists' party, Labour because you have been taken in by the lies peddled at the Labour conference that the wicked Tories plan to privatize the NHS, think again.

The science of saturated fat: A big fat surprise about nutrition?
After years of being told saturated fat is a killer and we should avoid it in favour of Big Food products that are the nearest modern chemistry can get to packaging arterial plaque, yet another scientific meta analysis shows the sat fat scare was based of fraudulent science and there is no evidence your steak is harming you.

CDC Admits as Many as 30 Million Americans Could be at Risk for Cancer Due to Polio Vaccine
Vaccine, that great profit driver for the pharmaceutical corporations, are under the spotlight again. This time it is a link between polio vaccine and cancer which makers and medical science has denied for fifty years that has finally been admitted by the US Centre for Disease control. How ironic they have owned up just weelks after the Obama administration granted Pharma corporations immunity from legal actions.
Posted by Boggart Blogger at 3:25 PM