Floating Debris Is From Missing Air Asia Jet - Or Is It

As a wave of comment on internet news suites about the similarities between the disappearance of an AirAsia Airbus, flight QZ8501 on a routine trip from Jave to singapore and the equally inexplicable disappearance of Malaysia Airlines flight MH370 in the same area en route from Kuala Lumpur nine months ago, it was quite predictable that while there remains no trace of MH370, this time floating debris and bodies have been found at the alleged crasah site.

For reasons of sensitivity new organisations are quite properly not publishing images of the bodies, however images of the 'floating debris' from the wrecked plane have been widely circulated. Problem is, what is shown does not look like wreckage from an aircraft, it looks like junk that could have come from any of the small, overloaded boats of dubious seaworthyness that sinks in the waters of the Java Sea while carrying refugees / asylum seekers / impoverished migrats in search of a new life. 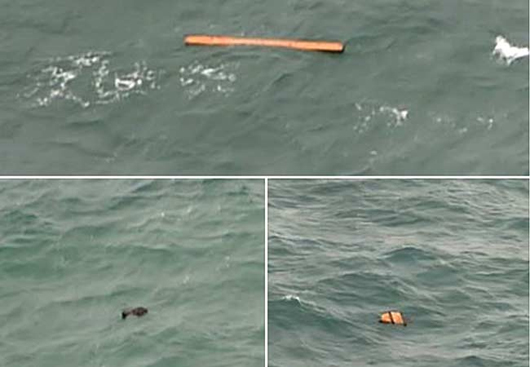 The floating debris offered as 'proof' that the place where the AirAsia aircraft crashed into the sea had been found.

Given the strangeness of the circumstances surrounding the aircraft's disappeance (a large, modern airliner of a type with an excellent safety record simply disappeared off radar with no trace), bloggers like Boggart Blog were entirely justified in asking during the 72 hours between the loss being reported and news of the debris, WTF was going on.

Now the story that is supposed to quell rumour and gossip is actually raising more questions. And then there's this:

On December 26, the Malaysian Insider reported that Fernandes, the founder of Tune Group Sdn Bhd which owns AirAsia, had sold a total of 944,800 shares in Tune Insurance Holdings Bhd, with 850,000 shares being dumped on December 22, and the other 94,800 being sold the day after.

According to its official website, Tune Insurance Holdings Bhd is “an insurance product manager” for AirAsia in which “insurance products are sold to (AirAsia) customers as part of their online booking process.”

Fernandes decision to dump the shares less than a week before AirAsia Flight QZ8501 disappeared over the Java Sea prompted some to speculate that he may have had prior knowledge of the incident.

“Did Fernandes know his company stock was about to take a hit? The timing is suspicious,” asks Heavy.com, adding, “If so, it indicates knowledge of an impending attack on AirAsia.”

The International Business Times adds that the move has prompted many to voice the theory that Fernandes, “possibly knew about an impending attack on one of the company’s aircraft.”

The story bears some similarity to the unusual market activity in airline stocks that preceded the September 11, 2001 terror attacks. An “extraordinary” amount of ‘put options’ – speculation that a stock price will fall – were placed on United and American Airlines in the days leading up to 9/11.

We can only speculate as to the reasons Mr. Fernandez sold a big portion of his holding in Air Asia and the timing of the same, and at this stage one opinion is no better than another. What we do know is that the sell off happened, that much is a matter of public record as required by stock exchanges around the world. Given the timing of the sale, to suggest it is pure coincidence is stretching our credulity a little too far.

Other sources are saying the accident may have been due to a pilot / air traffic control worthy of amateurs. The pilot however was a vastly experienced flyer who knew the area and understood the conditions.

from wsws.org
The plane’s pilot then asked to increase altitude from 32,000 to 38,000 feet due to the weather conditions, but the request was denied because there were six other planes in the vicinity. The pilots were instead approved to increase their altitude to 34,000 feet. Within three minutes, the plane had disappeared from radar contact entirely.

Unconfirmed secondary radar data of the plane’s flight reportedly show the plane was climbing toward 36,000 feet, at a speed of 353 knots, or approximately 650 kilometres per hour. Geoffrey Thomas, a Sydney-based aviation expert, said that, if true, this would be below the minimum safe speed for this altitude.

“The QZ8501 was flying too slow, about 100 knots [160 kilometres per hour]... too slow,” he told the British Daily Mail. “Essentially the plane is flying too slow for the altitude and the thin air, and the wings won’t support it at that speed and you get a stall, an aerodynamic stall.”

According to the newspaper, aviation experts have suggested that a build-up of ice on airspeed sensors, known as pitot tubes, might have given the pilots an incorrect speed measurement. False speed measurement due to icing is known to have contributed to the crash of Air France Flight AF447 on June 1, 2009 over the South Atlantic Ocean. The plane’s pilots were known to be manoeuvring to avoid storm clouds.