The wreckage of AirAsia flight QZ8501 which now has been confirmed to have crashed this past weekend 40 minutes into its flight from Surabaya to Singapore, should now be a straightforward air disaster story, a terrible tragedy but the kind of thing that happens from time to time for very easily understood reasons. Unfortunately, like the disappearance of Malaysia Airlines flight MH370 in March and the shooting down of Malaysia Airlines flight MH17 in August this latest of 2014's major air disasters is turning into another mystery that raises more questions the more we learn about it.

We must kick off with a quick recap on the rescue operation: Reuters reported earlier today, the wreckage appears to have been uncovered after rescuers said they have found the plane on the sea floor off Borneo, where sonar detected a large, dark object beneath waters near where debris and bodies were found on the surface.

Another anomaly has been the claim that rough seas and bad weather have hampered the search. Yet in the picture below of floating debris, allegedly from the AirAsia aircraft, the sea does not look particularly rough. 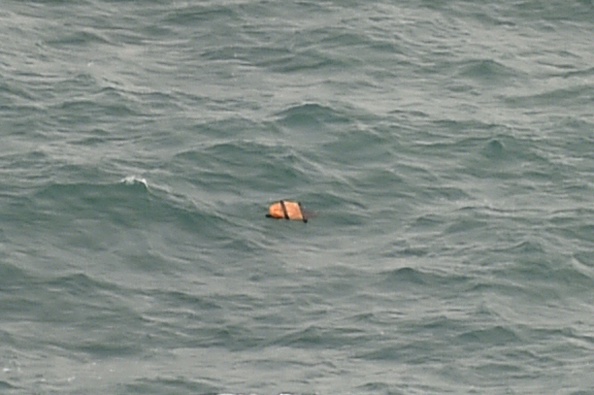 Ships and aircraft had been searching the Java Sea for Flight QZ8501 since Sunday, when it lost contact during bad weather about 40 minutes into its flight from Surabaya to Singapore. So far, the news feeds report, seven bodies have been recovered from the sea, this in itself should raise eyebrows as yesterday (Tuesday) it was reported forty bodied had been recovered. Still we can put the discrepancy down to journalistic over enthusiasm if you like.

Nothing surprising there, except perhaps that with all the technology modern aircraft carry, it took the rescue operation so long to locate the crash zone. From there however the story starts to get really strange. From Reuters we learn that "a body recovered on Wednesday from the crashed AirAsia plane was wearing a life jacket, an Indonesian search and rescue official said, raising new questions about how the disaster unfolded.

That would support a theory that it suffered an aerodynamic stall. This morning, a total of four bodies were recovered, one of them reportedly of them was wearing a life jacket," Tatang Zaenudin, an official with the search and rescue agency, told Reuters. He declined to speculate on what the find might mean. AirAsia Chief Executive Tony Fernandes told reporters there had been no confirmation yet of the sonar image, nor of the discovery of the body wearing a life jacket. And as we reported yesterday, the floating wreckage looked as if it could have come from one of the numerous refugee boats that sink in these waters.

Where is the mystery? As Reuters comments, the fact that one person put on a life jacket suggests those on board had time before the aircraft hit the water, or before it sank. And yet the pilots did not issue a distress signal. The plane disappeared after it asked for permission to fly higher and deviate from its planned course to avoid bad weather."

A pilot who works for a Gulf carrier said the life jacket indicated the cause of the crash was not "catastrophic failure". Instead, the plane could have stalled and then come down, possibly because its instruments iced up and gave the pilots inaccurate readings.

"If there was time to put on a life jacket it means the thing didn't just fall out of the sky," said the pilot, who declined to be identified.

So what does that leave u with? A plunging plane with over 160 people on board, a very experienced pilot, in fact a former air force fighter pilot with 6,100 flying hours under his belt, a sturdy Airbus 320 with hardly any crashes or fatalities in its history, one that last underwent maintenance just a month ago in mid-November... and then suddenly everything goes to hell, the pilots lose control and are somehow "too overloaded" to send a distress call?

Hardly; in fact the story makes no sense at all, which brings us to the latest unexplained airplane crash mystery.

Which is why we expect this story to be promptly revised as this type of loose end is hardly acceptable to those who like to control every narrative.

UPDATE:
Since I sat down to write this story an update has come in:

from Reuters (a little way down the page):

Tatang Zaenudin, an official with Indonesia's search and rescue agency, said earlier that one of the bodies had been found wearing a life jacket. But he later said no victim had been recovered with a life jacket on. "We found a body at 8.20 a.m. and a life jacket at 10.32 a.m. so there was a time difference. This is the latest information we have," he told Reuters.

Living within the conspiracy
Posted by Boggart Blogger at 10:54 AM No comments: