The European Union immigration crisis that is now affecting most of the EU's wealthy nations and some that are only just clawing their way out of poverty after independence from the Soviet Union or Yugoslavia, appears to be dividing societies more deeply and pushing many European societies towards civil conflict as the affluent, self indulgent elite, in their efforts to show how caring and politically correct they are, further alienate the working class, middle and low income groups whose lives are seriously affected by the influx of violent extremists from lawless areas of the world.

A report from Europe's top human rights watchdog, The Council Of Europe, published Thursday, 1 October raised concerns about the growing incidence of racism in Germany, citing a wave of far-right, anti-Islam demonstrations at odds with the more recent image of a country ready to open its doors to hundreds of thousands of refugees (no mention of the meteoric rise in rapes of German women by foreigners or the establishment of no-go zones for non Muslims of course).

"There have been worrying developments as regards public manifestations of racism and xenophobia,” the Council's committee on national minorities said in a press release.

"Manifestations of anti-Semitism and anti-Muslim and anti-immigrant sentiments are… reported to be rising, as well as attacks against asylum seekers,” the report states.

It specifically referred to the Monday marches organised by the anti-Islam PEGIDA movement last winter, which at its height drew crowds of up to 25,000 in the eastern city of Dresden, although support for the movement has since fallen. (But again no mention of the meteoric increase in rapes of German women by foreigners since Hausfrau-Volksfuhrer opened the flood gates)

While there were large counter-demonstrations and official statements in support of diversity and mutual respect, "sustained efforts are still needed to foster a climate of tolerance and intercultural dialogue,” the council lied, without mentioning the way German mainstream media blacks out reports of the true level of anger at uncontrolled immigration among German citizens.
The report — which was adopted in March but only released on Thursday — also highlighted the "heinous fatal stabbing” of an Eritrean man in Dresden on the evening of one far-right demo, days after the door of his flat had had a swastika painted on it, but contains no reference to violent crimes perpetrated by foreigners (particularly from Africa and the middle east) against Germans. 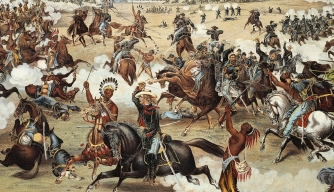 European immigrants integrate with Native Americans Image Source
Boggart Blog, West Of The Mississipi, 1 October, 1815. Today a council of Native American elders from the Sioux , Comanche, Cheyenne, Arapaho and 150 other tribes have debated how to cope with the estimated 220 million illegal immigrants who are expected to come to or be born in the United States in the next 200 years.
"Our ageing population needs immigration" said Running Cloud of the Hopi.
"We have always been a mongrel nation " said Little Bear of the Shawnee
"We probably brought this on ourselves by angering the Rain God" said an anonymous Chief. "Our rain dances were not good enough this year"
"It might be better if we could protect our borders and keep them in camps in Europe" said Black Cloud of the Shawnee.
This was described as "racist" by Big Chief Merkel of the Sausijscoffa Tribe who said that she could see no risk to the continued prosperity of Indigenous Americans in allowing Europeans to come to America. She was sure that they would quickly integrate themselves into Native American culture and the carefully created civilisation that had taken thousands of years to develop would be unaffected.