Christians Are Not Safe In Europe, European Parliament President Says 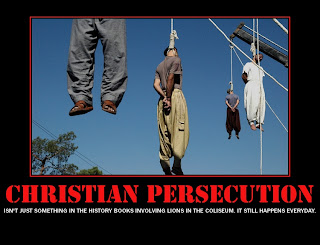 In a meeting on religious tensions in Europe today (3 December, 2015), European Parrliament (EP) President Martin Schulz said that the persecution of Christians in Europe is under - reported and does not receive enough media attention, which has also meant that it "has not been properly addressed".

(It is worth noting that over the past few years schulz has been one of the leading advocates of mass migration of predominantly Muslim economic migrants (presented by the media and authorities as 'refugees and asylum sekers' from African and the middle east to Europe.)

Schulz’s concerns were repeated by EP Vice President Antonio Tajani, who warned that Europe sometimes "falls into the temptation of thinking we can ignore this task," referring to the protection Christians throughout the world who suffer persecution.

The Open Doors report for 2015 found that “Islamic extremism is by far the most significant persecution engine” of Christians in the world today and that “40 of the 50 countries on the World Watch List are affected by this kind of persecution.”

For Islamists, Tajani said, Christians are the new “crusaders” of Europe, and because of Islamic persecution in the Middle East more than 70 percent of Christians have fled Iraq since 2003, with another 700 thousand Christians who have been forced to leave their home in Syria since the outbreak of civil war.

"No religious community is as subject to hatred, violence and systematic aggression as the Christians," he said.

That extremism was confined to the middle east until quite recently but European Union policies that encouraged the mass immigration of undocumented travellers, allowing anybody who turned up at Europe's borders to identify themselves as asylum seekers or refugees has allowed extremists unchecked access to Europe and the attacks on Christians and vandalisation of Churches is happening in Europe, particularly Germany and Sweden where guilt addicted north European self haters have even given immigrants de facto immunity from legal sanction thus turning the streets of Swedish and German cities or towns into mini Syrias or Libyas.

Speakers at the meeting cited the work of Open Doors, a human rights charity that monitors the persecution of Christians, noting that millions Christians worldwide live under regimes which routinely torture, rape and arbitrarily imprison Christians for their beliefs. In Iraq, Somalia, Syria, Pakistan, North Korea and Nigeria, Christians have been stoned, whipped, beheaded, shot, hanged and thrown into rivers or lakes in weighted bags simply for being Christians. And yet in the west, the moral fascists who call themselves progressive tell us we are persecuting Muslins every time we eat a pork chop or bacon sandwich or wish a fiend Merry Christmas.

Time we started perseucting lefties maybe, we need to make these idiots understand that people to kiss the arses of immigrants who hate our culture and way of life goes way beyond 'being fair to minorities' and amounts to persecuting people who refuse to have the values of those 'minorities' forced on them.

Loud Trump Resonates Throughout America - Boggart Abroad
I don't know why the politically correct left are getting so worked up about The Trump, American politics is even more tightly controlled by big money than the European system, and the really big money (Golman Sachs, J P Morgan, Soros and company) are not going to let him win. It would upset thrir buddies in Saudi Arabia too much.


Why Are Governments Scared Of Truth? France Begins Crackdown on Conspiracy Theories
We reported several weeks ago that the French government was planning a clampdown on conspiray theories by shutting down certain dissident websites. Since then we have learned the French government have shown they are prepared to go even further in attacking citizens right of free speech