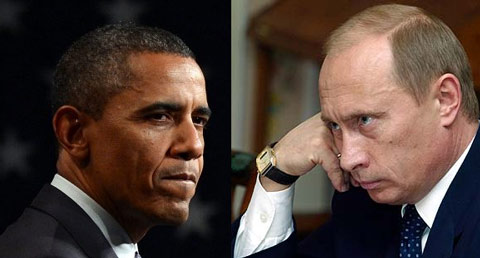 It's good to know Russian leader Vladimir Putin reads The Daily Stirrer. Here he is saying exactly what we have been saying since 2011.

Appearing at the inaugural Moscow-hosted Eastern Economic Forum in Vladivostok, the Russian President has blamed the migrant crisis emanating from the Middle East on America. He also blamed European states for backing US efforts to spread democracy, which he said were responsible for the current exodus of people sweeping across the EU.

Putin addressed journalists on Friday 4 September, telling them he had predicted the current crisis.


“I think this is a completely expected crisis,” he said. “We in Russia say, and I have said it myself, that there will be large scale problems if our so-called Western partners pursue such an erroneous policy, especially foreign policy, in the regions of the Muslim world in the Middle East and North Africa. They continue to engage in such a policy.

“What kind of policy is it? It is about imposing their own standards, without taking into account the historical, religious, national, cultural features of these regions. This is primarily a policy of our American partners.”

Putin commented that he was surprised as the US’s criticism of Europe’s handling of the crisis, seeing as it was the US which had created it. He emphasised that America had not suffered at all personally from the crisis, while Europe, which “blindly followed US instructions,” had suffered heavily.

Mr. Putin's comments came only days after Russia’s ambassador to the EU made similar statements.

Speaking on a panel entitled “The EU and Russia: Rivals, Opponents, Partners?” at the Alpbach Forum on 31 August, Ambassador Vladimir Chizhov told the audience EU enlargement was the cause of the deterioration in relations between the European Union and Russia.

Referring to the Lisbon Treaty, he said: “The inward-looking peace project has acquired a new somewhat messianic dimension – the EU now ‘seeks to advance in the wider world… principles which have inspired its own creation’. The question is, however, whether this ‘export of democracy’ is consistent with the objective of maintaining peace inside and beyond the European continent, or the European Union will have to make a hard choice between the two.”

The Daily Stirrer has consistently predicted that the coalition led by the USA, UK and France (the FUKUS axis) would, by meddling in the domestic affairs of sovereign nations (in violation of the United Nations charter) precipitate civil war, economic hardship and mass migration from Africa and Asia to the European and North Amrican nations.

We have also said the US / EU push to absorb former Soviet bloc nations (e.g. Poland, Lithuania, Georgia and Ukraine) into the EU and NATO in breach of a 1991 treaty would result in a return to hostility between Russia and the western power. Were we right or were we right.

Obama, Russia and the death of the petrodollar

USA prepares for war in Ukraine

Will Russia and USA Go To War

ISIS Islamic fundamentalist army was a US creation

Why appeasing Islamic extremists will not work