'No Borders’ Activist Gang Raped By Sudanese Migrants, Pressured Into Silence As Story Might ‘Damage The Cause'

Activist gang raped by a migrants: "The others asked me to keep quiet," 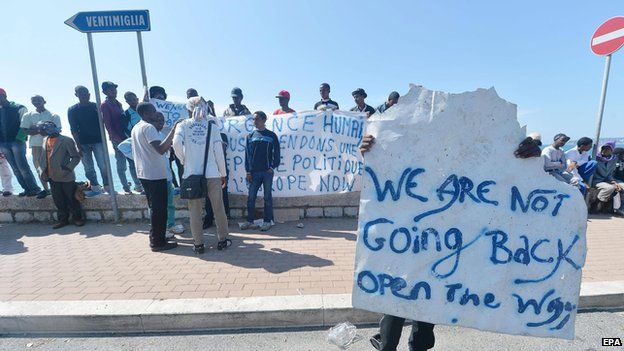 Wannabe migrants to Germany at the Ventimiglia border control between France and Italy, showing the anger, resentment, hate and sense of entitlement that will be their contributions to European society. Image source
After a female voluteer working for the "No Borders" movement was gang raped by Sudanese , she claims she was pressured by colleagues into covering up the story because 'it might damage The Cause' 'refugees'. Asked to comment on the incident officials of the organisation would only say. "The woman has been removed"

The alleged victim, a woman of about 30 years, was working for the activist group for about a month, stationed at a 'refugee' camp at the Italian-French border crossong of Ponte San Ludovico in Ventimiglia. After being pressdured not to report the incident, she told police she was raped for over an hour by several men of Sudanese origin, while under one of the showers set up in a field neighboring the camp of Balzi Rossi.

According to reports in the newspapers La Stampa and Il Secolo XIX, the woman did not report the incident unti one month after it took place explaining to the police she remained silent for so long because she was convinced by fellow activists to avoid scandals because if the story was reported in media it would harm other migrants and delegitimize the struggles of No Borders, a group formed to help deal with the refugee emergency by support the claims of asylum seekers and encouraging more to come to Europe.

Violence
The woman explained that the violence of that night, a Saturday when a party going on, was not stopped because due to loud music no one heard her screams. She declared that it was eventually decided to report the incident to the police commissariat of Ventimiglia on the advice of an acquaintance. The perpetrator of the violence, meanwhile, would have left the border camp.

Authorities are investigating the case, which has many gray areas. Since the woman reported her rape, leaders of No Borders, interviewed by Riviera24 News explained that she was not be part of the "No Borders" The group with which she was involved had its No Borders afilliation withdrawn "because of its very libertine and provocative attitudes." So, "perhaps she acted out of spite," they said, suggesting she went to police in Ventimiglia to report the alleged rape from malice. For No Borders to be in denial is understandable, some of the group's volunteers, if it is confirmed the woman was pressured into staying silent, could be prosecuted for aiding and abetting the crime and perverting the course of justice.

The behaviour of migrants at the camp towards European women is sensitive issue, as it is in Germany, Sweden, Denmark, The Netherlands and Britain and a reasonavly credible allegation of rape by a migrant of a European woman is likely to further exacerbate tensions in the Italian-French border town of Ventimiglia where the emergency seems to be due more to the high handed and self righteous attitude of activists who show partisanship towards the migrants, while the migrants themselves behave as if they are still living under Sharia law in their native countries.

The Democratic Party mayor, Henry Ioculano, asked No Borders to vacate the tents and restore legality. Residents of the area have made numerous complaints to the degradation caused by the migrants lawless and unhygienic behaviour, the music and the noise at night to the area they live in. Traders near the border crossing complain that where French people used to buy from them because tobacco and liquor prices are much lower than those in France, business has fallen because of aggressive begging by migrants. Some have even dhut up shop because of the fear generated by the presence the "No Borders" camp whose residents seem to be under the impression that they do not have to pay Chrisian shopkeepers for goods. Recently the French Gendarmerie have introduced tighter border controls.

Our leaders and 'left wing' friends, who constantly scream about rape and sexism if a European man makes a suggestive remark about a woman see no irony, humourles, self righteous twats that they are, in calling for more mass immigration from the cespits of humanity where women are still accorded less respect than animals. And we're not the only ones to have noticed ...

A story picked up by Pam Geller (always a reliable fact checker although some dislike her sensationist style of reporting) of Muslim migrats raping German women while migrant women are being forced into prostitution is not playing well with the femiists and left wing extremists who want us to believe the lie that these barbarians actually enrich our culture.

The European Union immigration crisis that is now affecting most of the EU's wealthy nations and some that are only just clawing their way out of poverty after independence from the Soviet Union or Yugoslavia, appears to be dividing societies more deeply and pushing many European societies towards civil conflict as the affluent, self indulgent elite, in their efforts to show how caring and politically correct they are, ...

As the lawless criminal scum imported by Merkel in her efforts to suck up to Obama threaten to turn Germany into a third world human cesspit, it seems public opinion in European is waking up.

This content is so gobsmackingly evil, all we can say is if we hsad not spent hours authenticating it, we would not believe it. If after readin and watching this you still think uncomtrolled mass imigration from the Muslim nations of Africa and the middle east, you need to see a psychologist.

It has long been recognized that German chancellor Angela Merkel models her leadrship style on those og Hitler and Stalin. What is not so well know is that Facebook CEO Zuckerberg is collaborating with Merkel, Obama, Cameron and other leaders sympathetic to global fascism to introduce censorship of internet content. Avoid Facebook, Zuckerberg is a Nazi collaborator.

Genocide: How rape becomes a weapon


The Intellectual Elite Truly Despise People They Pretend To Care About