Migrants Mass At Greek Border Waiting To Cross Into Europe 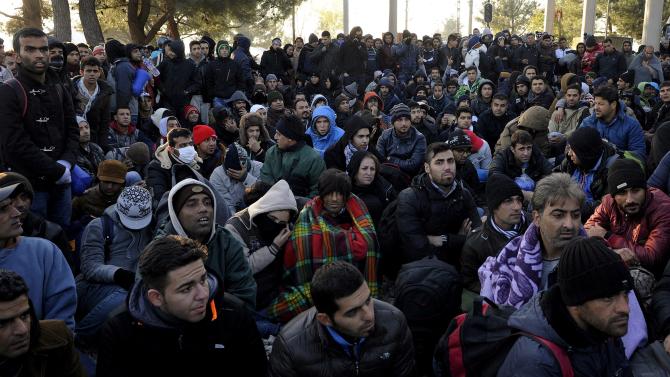 And you though the prospect of Britain leaving was the biggest problem facing the European Union at the moment?

In spite of having run for over a year so far, the migrant crisis is still getting bigger. Here's news on the latest development.

An estimated 6,500 undocumented travellers (i.e. no passports, no ID, no visas etc.) were assembled at the Idomeni camp on Greece’s northern border with Macedonia on Saturday according to news feeds, after four Balkan countries announced a daily cap on migrant arrivals.

The log jam began after Macedonia began refusing entry to Afghans and imposed stricter document controls on Syrians and Iraqis, slowing the passage of migrants and refugees to a trickle.

The situation now looks set to worsen significantly after EU members Slovenia and Croatia,and Macedonia, as well as Serbia, a non EU nation which has allowed migrants free passage through its territory but no refugee of asylum seeker status, said they would limit the number of migrants entering each day to 580.

The tighter controls have left thousands stranded in Greece, as the bloc’s worst migration crisis since World War II shows no sign of abating.

Macedonian authorities opened the Idomeni border crossing on Saturday afternoon and dozens of migrants were allowed to pass through, with local Greek police sources saying 300 were expected to cross the frontier by the end of the day.

More than 20,000 refugees and other migrants are currently on Greek soil, according to the office of migration minister Yiannis Mouzalas.

Friday’s announcement by four Balkan states came a week after Austria said it would only allow 80 people to claim asylum per day, and also pledged to limit the daily number of people passing through the country to 3,200. Hungary, another nation with a common border with Serbia, closed its borders several months ago.

The latest move has sparked a bitter spat between Athens and Vienna, with Greece fearful it would trigger a domino effect, leaving thousands stranded on its territory as migrants continue to land on its beaches from Turkey.

Austria accuses Greece of deliberately not policing its borders properly and allowing migrants to continue their journey towards northern Europe as a way of passing on the problem of dealing with the lawless, illiterate insurgents to other EU nations.

“Europe can’t be indifferent to those of our partners who don’t respect their obligations,” Greek President Prokopis Pavlopoulos said of the border restrictions on Saturday.

If you think that is bad, there is an even bigger problem going to hit the EU in early summer as the Italian banking system goes belly up. You heard it here first ...

A Closer Look At No - Go Zones For Europeans In EU’s Notorious Migrant Districts
In the wake of the latest terror attacks in a European city, (Brussels this time) it seems everybody in the EU except for the politicians and senior bureaucrats whose ineptitude and arrogance caused this mess, is now aware of the scale of problems for European socities emanating from the Islamic enclaves that have been allowed to develop by authorities more interested in being politically correct that serving the people who pay them.
Britain Unable to Deport Undocumented Migrants
If their asylum applications have failed it is because there is no reason to suspect they face death or imprisonment if they are sent back to their country of origin. So we give them a choice, we'll give you a free passage home or you can work dor your living shovelling shit on a pig farm. These people come to us as supplicants and beggars can't be choosers.