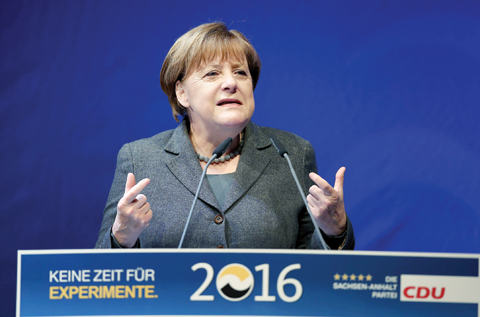 Angela Merkel: Not coping well with rejection (Image source)
Sunday’s regional elections in Germany, the largest and most powerful economy in the EU notes possibly signalled the beginning of the end of Chancellor Hausfrau - Volksfurher Merkel’s reign as leader of the largest German political party, the Christian Democratic Union (CDU) and therefore of her country.

Until the refugee crisis hit, the German leader seemed all but invincible. But her failure to broker a broad solution at the European level, leaving Germany virtually alone to shoulder the problem, has left her exposed. Her approval ratings are back above 50 percent but have proved volatile. Sunday’s verdict was a clear warning from the electorate that Germans have lost patience with the chancellor’s deliberate approach to the crisis. Merkel argues, with justification, that the myriad challenges Germany faces on the refugee front won’t be solved overnight.
Yet, the election loss changes the dynamic. For the first time, her own party critics can point to hard election results to argue that her policies are having a detrimental effect on them. Though Germans are roughly split between those who support and those who oppose the chancellor’s course on refugees, many in her own party are in the latter camp.
With Merkel’s party already divided on the issue, it’s only a matter of time before challengers emerge. It’s still very unlikely she would be ousted as chancellor between now and the next round of elections, expected in the fall of 2017. But if she doesn’t turn the tide in her favor soon, she may either decide or be forced by her party to forgo another run.
The comments are echoed by German website N-TV.de, which specifically mentions the incendiary tweets of one of the CDU’s more conservative members, and social media firebrand, Erika Steinbach:

The polling stations were not even closed before CDU politician Erika Steinbach provided a renewed, scandalous attack on the refugee policy of Chancellor Angela Merkel… Steinbach tweeted [about the migrant crisis]: “Since September all without the consent of the Bundestag… as in a dictatorship..”
Mrs Merkel, 61, faces a national election in November next year but as yet no serious contenders for the leadership of the CDU Party have emerged. Voters may have put paid to the hopes of one successor, Julia Klöckner, 43, the leader of the CDU in the western state of Rhineland-Palatinate, who was projected to lose to the centre-left Social Democratic Party.

The Times notes that one of the losers of Super Sunday, Julia Klockner, may come back to haunt Mrs. Merkel.

Germany’s politics is more complex and convoluted than the systems of the USA and Britain, but what is at least clear is that around the world it looks to observers like Mrs. Merkel has been given a very bloody nose for her migration policies. Politico claims that Germany is, like the rest of Europe, moving to the right and responding to populist messages. World leaders will be, now more than ever, cautious not to follow her lead.

As EU leaders meet the Turkish Sultan President Recep Tayyip Erdogan,prepared to offer him whatever he asks for, on top of the five billion Euros he has already trousered in return for Turkey’s empty promises of help in controlling the flow of criminals, rapists, people traffickers and jihadists refugees from all over the middle east, Asia,and Africa Syria ...
Starting Pistol Fired In Race To Succeed Merkel
While the odds of Merkel being deposed by a putsch in her own party may seem slim, they have been improved vastly by her party’s monumental failure in German state elections on Sunday, with her migration policy as the rationale for huge numbers of voters abandoning the CDU for the anti - integration, anti - immigration AfD party.Merkel Braced For Disaster As Polls Conflict On Election Prospects
What Hausfrau Mekel Did Not Tell The German Voters Before They Handed Her A Third Term
German Politician Predicts White Germans Will Be A Minority. Faces Calls to Quit.
German Government To ‘Create’ 100,000 Subsidised Migrant Jobs That ‘Pay’ Just €1 An Hour
German Ubermacht resurfaces in EU
Immigration omnibus
Turkey 'Blackmailing Europe Over Migrant Crisis'
Opposition From EU Members Sinks Brussels' Refugee Quotas Plan
Immigrants create Sharia Law zones in Germany
Immigration? It's another Soros Scam
"Our Europe Is Dying": Young Germans Video Blasts Merkel's "Multicultural Utopia": Censored By Facebook.