They, Your Husband's Victims That Is, Have Names, Hillary

"Donald, she has a name," Hillary Clinton taunted during the first presidential debate of 2016. "Her name is Alicia Machado. And she has become a U.S. citizen and you can bet she is going to vote this November."

Trump missed an open goal. He could have replied, "Hillary, they have many names, including Juanita Broaddrick, Gennifer Flowers, Paula Jones, Kathleen Willey, Eileen Wellstone, Sally Perdue, Elizabeth Gracen, Carolyn Moffet, Monica Lewinsky, and others too numerous to list. And although I can’t confirm if the foreign-born among them all hold citizenship, one bets that few will cast votes for the wife of the sex abuser who raped or assaulted them this November."

But in the warped world of politically correct liberalism, Bill Clinton merely harassed, assaulted, and raped numerous women over the years. Donald Trump allegedly called a beauty pageant winner who misinterpreted her Miss Universe title as a license to eat it "Miss Piggy." (the evidence suggests otherwise, Trump appears to have joked about his own weight while being supportive of the young woman whose weight gain made mock of her beauty queen status.

This is a case pot calling the kettle black (oops, I hope that's not considered racist). People who live in glass houses shouldn’t throw stones. Before you look at the splinter in your neighbor’s eye, take out the log in your own eye. Choose your favourite cliché, but perhaps the most appropriate is, The emperor has no clothes. 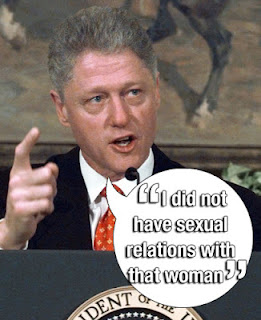 Image source: blogspot commons
We cannot know if Bill Clinton believed he was wearing a glorious suit of golden cloth when, with his erect member jutting out from beneath the only garment he wore, a cotton singlet, he allegedly pointed to his podger and commanded Caroline Moffet to 'suck on this' or some such words. When the young woman refused, Hillbilly Bill showed his spiritual links with the guys in the movie Deliverance by attempting to pull Moffat's face into his crotch. This offense against Ms. Moffet (and other similar and worse offences), and Hillary Clinton's role in protecting her serial rapist husband from the consequences of his sex crimes by intimidating his victims, as far as her supporters are concerned, does not constitute a sin against feminism because as all progressive liberals know, there is one law for them and another for those who disagree with them. When a “D” follows a politician's name and that politician follows the party line on abortion, immigration, gay rights and effecting regime change in third world nations, immunity from prosecution for all crimes is assured.

And while it is possible to argue Mrs. Clinton appears more sinned against than sinning in her husbands extramural and extralegal sexcapades, she repeatedly was highly active in covering up his sex crimes and trying to discredit his victims by branding them liars, sluts and whores. Is Trump's alleged fat-shaming worse than Hillary's well documented slut-shaming. And isn't Hillary's status as a superbitch emphasised by the fact that the rape victims she slut - shamed behaved like ladies while she behaved like an angry, vindictive she - demon?

Mrs. Clinton called Ms. Flowers “some failed cabaret singer who doesn’t even have much of a résumé to fall back on,” (yes, it's on record) and once promised to "crucify her" on the witness stand if the chance to cross-examine occurred. "We have to destroy her story," she told White House aides of Paula Jones. After the case of Ms. Lewinsky hit the Drudge Report, she famously blamed the allegations on the "vast right-wing conspiracy," (surely the most worn out phrase in the Democratic candidate's repetoire.

The Washington Post revisited this unsavory history in the wake of Monday’s debate charges against Trump. But the media’s abdication of their investigative duties regarding the powerful generally grants Hillary Clinton a free pass to hurl such insults against Mr. Trump about his behavior in the 1990s on the debate stage without fear of repercussions regarding her conduct in the 1990s. As we all now know, Trump looked inept in the debate because there were 'technical issues' with his microphone.

Was it deliberately tampered with? You may say that, I couldn't possibly comment.

FBI Drops Hints They Are Ready to INDICT Hillary Clinton
Sources close to the FBI investigation into Democratic Party presidential candidate Hillary Clinton's offences relating to national security when she was Secretary of State say the Feds are ready to indict the frontrunner in the nomination process on charges relating to classified information.
Yes, the Panama Papers Could Really End Hillary Clinton’s Campaign
We've been chronicling the downfall of Hillary Clinton, from her seemingly unassailable position as the anointed successor to Barack Obama, whose path to first the Democratic Party nomination and then the Presidency itself had been carefully planned and all obstacles removed. The fixers and deal makers had reckoned without two factors however, Bernie Sanders and Mrs. Clinton's poor image with voters, a result of her spoiled little rich girl arrogance and the incompetence she showed in office as Secretary of State.
Obama's price for saving Daves seat on the EU Gravy train
America being destroyed by neo - liberalism

Greenteeth Bites ]
Only Whites Can Be Racist? Google Rewrites Dictionary As Well As History
if we look at the Huffington Post article that 'establishes beyond reasonable doubt' it is not possible to be racist to a white person, we find the "credible" sources quoted in defense of their controversial conclusion on reverse racism is actually one black supremacist, the auteur of the 2014 film, "Dear White People." The racist hatred of whites portrayed in the film is palpable.


How Clinton, Obama founded ISIS
Democrat primaries rigged for Clinton
Hillary clinton links to Soros
Clinton vs Trump: One wants war, the other is named Donald
Clinton promises tyranny in the USA
Clinton campaign voter fraud in primaries
An American Trump
Trup, Clinton battle for America
Will Trump make America into an oligarchy