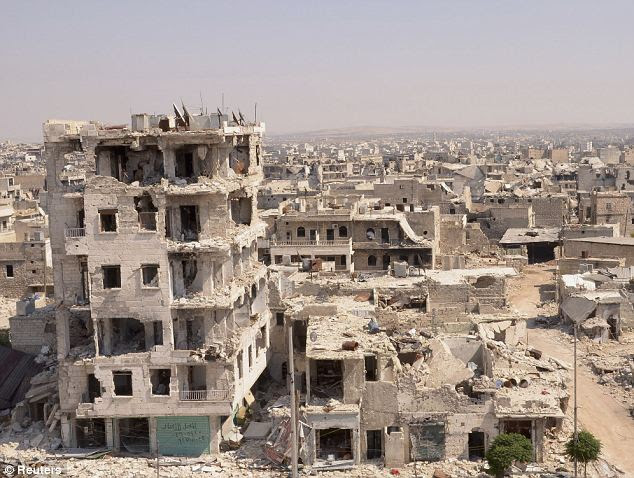 Aleppo: The legacy of Obama's foreign policy (Image source: daily mail)
You would hardly know it from what you read and hear in mainstream news, but the Syrian military backed by Iranian ground forces and Russian air support is closing in on rebel held parts of Aleppo, the last ISIS stronghold in the heavily populated part of Syria. As Barack Obama’s Presidency nears its close, the self styled peacemaker and joybringer is looking at the liklihood of adding to his legacy another foreign policy disaster, another war lost and another failed state created. On the other hand, hardline hawks in the US administration (Hillary Clinton for example), and in the US military are seeking ways to escalate the conflict in Syria to prevent a Syrian victory over the ISIS terrorist forces, formed and backed by the USA under Obama's presidency and when Hillary Clinton was Secretary of State with the aim of deposing Syrian dictator Assad.

America's gameplan in Syria has beenb unravelling for about a year now, ever since Vladimir Putin decided US military efforts to oppose ISIS were at best half hearted because, while unable to openly support the terrorists, Obama saw the rag bag army of fanatics, nutters, head amputators and human organ noshers as allies. Putin, backed by China and Iran decided that forces loyal to his ally Assad were doing well enough in soaking up everything the US / Saudi backed rebels could throw at them, but were not capable of winning without help so he ordered Russia's air force to support Assad's ground troops. Suddenly ISIS, seemingly unstoppable in the first half of 2015, were on the back foot.

The Syrians and Iranians seized the initiative and began to push back the reblels. In recent days however, events have taken a very dangerous turn, beginning with an unprecedented US airstrike on Syrian army positions in Deir ez-Zor (an act of war against the legitimate government of Syria). US officials claimed they were aiming for ISIS targets but struck Syrian army positions accidentally, killing 62 soldiers and exposing the remaining survivors to an Islamic State offensive. This is unlikely as the targets struck by US bombs have never been in rebel hands.

In the days leading up to the 'accidental' massacre, the New York Times reported a disagreement between Secretary of State John Kerry and Defense Secretary Ashton Carter over the terms of the proposed ceasefire being negotiated with Russia.

Carter reportedly had ‘deep reservations’ over plans for American and Russian forces to share information and jointly target terrorist organisations as proposed in the ceasefire agreement. Defense Department officials publicly refused to say whether they would implement the agreement.

The attacks on a UN relief convoy that followed prompted US officials to imply Russia was responsible. Reuters and others reported claims by anonymous US officials identifying Russia as the perpetrator, while mention of the US strike against Syrian forces in Deir ez-Zor was omitted from most dispatches.

The Syrian and the Russian militaries have since publicly and categorically denied striking the convoy. UN officials initially described the attack as an ‘airstrike’, implicitly pinning the blame on Russian or Syrian aircraft, but have since acknowledged there is a lack of conclusive evidence about what really happened.

Top US military officials have now admitted they were unsure who attacked the convoy though Defense Secretary Carter maintains that “Russians are responsible for this strike whether they conducted it or not.” Well you can't argue with facts like that.

Through the words and actions of US officials, one can draw the conclusion that the US military - industrial complex would not allow the Kerry-Lavrov ceasefire to succeed.

The strategic and symbolic significance of the liberation of Aleppo is apparent, and now the immediate focus of the US and Gulf powers that support the armed groups is to hinder the advance of Syrian forces and their allies as they consolidate control over Castello road (the last remaining rebel supply route) and surround areas of eastern Aleppo held by insurgents.

RELATED POSTS:
UN Peace Council: The Syria conflict is a proxy invasion by the United States

This blog and our other publications have been saying ever since the 'Arab Spring' was stirred up by a stupid, demogogical speech made in Cairo by Obama, that the US aim was a proxy war with Russia and Iran in the middle east. Look what happened since then. Secular Muslim leaders in Egypt and Libya were overthrown by US led regime change campaigns ...
Syria to become Armageddon?
Syria: The FUKUS axis war
Syria: Obama's graveyard biggests US foreign policy fail ever?
How Obama underestimated Syria
Putin role in Syria conflict
Syria: The real agenda
Syria was tyypical US foreign affairs blunder
US proxy war with Russia fought in Syria
US and UK hypocrisy over Syria
Obama the real danger to world peace
Obama's idea of nation building
NWO regime change business
Russia ans USA drifting towards war
ISIS was a US creation
Turkey's illegal oil trade with ISIS
Bombing alone will not stop ISIS