Undocumented migrants walk through a, EU border crossing. nobody checks to see what they might have under those blankets (Image source)
The European Union was throw into confusion today as national leaders overruled Brussels bureaucrats to suspend the 'open borders' Schengen Zone agreement. Leaders of the twenty eight E U nations agreed to scrap one of the most fundamental principles of the community of nations, free movement of people between nations in the EU. The move was a response to the escalating migrant crisis that is causing social and economic problems in the nations where large numbers of migrants are congregating.

The floundering bureaucratic dictatorship of Brussels seems to be slipping ever closer to disintegration after the efforts of EU Commission President Jean - Claude Juncker, E U Parliament President Martin Schulz and European Council President Donald Tusk to bully member nations into accepting all undocumented travellers arriving at their borders failed. Several small nations on the migrant route from Italy and The Balkans where they arrive on European soil to Germany, France and Sweden which are the most welcoming to unskilled migrants who bring only a sense of entitlement to the societies that offer the most generous social benefits, having already closed their borders, built border fences and introduced border controls. With the announcement that the Schengen agreement, for so long a sticking point in Britain's bid to renegotiate its membership terms, now shelved because of the refugee chaos we wonder what will be the next to be rejected by member nations in the rebellion against the undemocratic bureaucracy in Brussels.

Although the EU superstate heavy hitters including Germany's Chancellor Merkel and President Hollande of France have in recent weeks warned Schengen was vital to the survival of the EU, the 28-nation bloc has become paralysed by indecision over its failure to control the flow of millions of migrants into the continent.

Leaders, under pressure from increasingly Eurosceptic electorates have ignored the Europhiles pleas and the entreaties of Global Government advocates like Barack Hussein Obama and George Soros, and the free movement agreement, after being abused by the Brussels bureaucrats is now set to be suspended for at least two years. The Free Movement provided for in Schengen applied to the movement of EU citizens and residents between nations, it did not anticipate the failure of Europe to control its external borders, thus permitting extremists, criminals and terrorists to enter and freely move around the European Union.

Nations are now making plans to reimpose border controls after they have been in abeyance for more than 30 years. This effectively kills off the Europhile dream of creating a European superstate.

Norway's Biggest Bank Joins Push To Abolish Cash
The move by governments to eliminate cash as a means of trading goods and services is moving faster than we imagined. With another global financial crisis looming according to financial journalists and investment experts this is as understandable as it is undesirable for us ordinary punters.

Islamification Of Germany: Regensburg City Council Considers 'Women-Only' Transportation
Public segregation of men and women, women only buses, segregated sessions at the swimming pool. European politicians have betrayed the people of Europe and are giving away our traditional freedoms in order to appease bestiali Muslim immigrants. 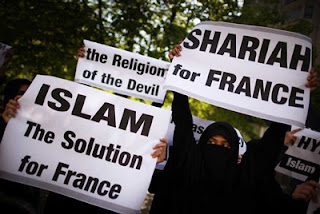