Something Smelly About The Latest Syria Gas Attak Reports 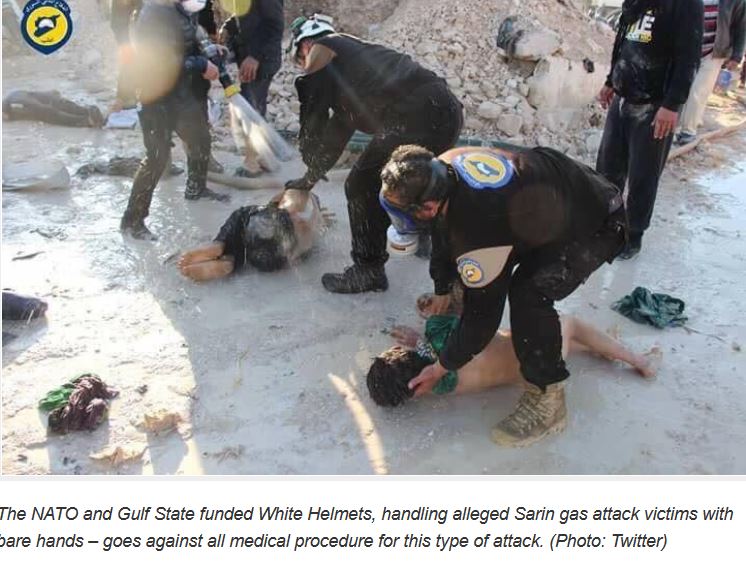 “At least 58 people were killed in an alleged horrific gas attack in the Idlib Governorate this morning“, was the story that greeted us in Britain today as we staggered out of bed to make that life giving first cup of tea or coffee. And as usual with the worst atrocities of recent years, the news bulletins were featuring government spokespeople falling over their tongues in the rush to blame Syria's Assad regime and "The Russians," before investigations could be conducted and evidence to gathered.

This immediate accusation from a high ranking EU official follows the dangerous precedent set by none other than Barack Hussein Obama, who when news of Malaysian Airlines flight MH17 broke and the cocksucker president was on TV saying he had evidence Vladimir Putin was personally responsible almost before the stricken plane had hit the ground.

We have seen the same tactic with previous alleged gas attacks in Syria when US and NATO officials blamed Russia, citing fake evidence but later United Nations investigations suggested the gas had been fired from ground based artillery within areas of Sysia held by US sponsored rebels. The theory behind this tactic is where a narrative can be constructed before the truth surrounding the tragedy can emerge the public outcry can be managed to suit the political agenda of the US / NATO / EU military - industrial complex.

In this case Israeli President, Benjamin Netanyahu, joined in on the condemnation, as did Amnesty International. Unfortunately the public have been lied to so often by the politicians, bureaucrats and mainstream media, nobody believes anything that comes from them any more. And with good reason ...

Only hours after the alleged chemical weapons attack in Khan Sheikhun, supposedly by the Syrian government, the holes in the official narrative are beginning to emerge, discrediting the claims of Al-Qaeda affiliated White Helmets.

In the picture at the top of this article, White Helmets personnel are handling victims of the highly toxic gas (sarin, according to official sources) without sufficient safety gear, they have the wrong masks, no gloves and are wearing ordinary overalls rather than full body HAZMAT suits. Although this may seem insignificant, once we know how postent a nerve agent sarin gas is then the claim it was the chemical immediately looks ridiculous. The claim that in a densely populated area only 58 people died looks dodgy as well.

Within seconds of exposure to sarin, the affects of the gas begins to target the muscle and nervous system. If inhaled, tiny amounts of the gas can be fatal, but contact with exposed skin can be fatal too. Symptoms of contact with sarin can begin in minutes. When sarin is used in a concentrated area, the likleyhood is that thousands of people will be killed or mained. Yet, though dealing with one of the most dangerous substances in the world, the White Helmets are treating people exposed to the nerve agent with little concern for their exposed skin or inadequate masks. This has to raise questions around the credibility of the official story.

It also raises the question why a doctor in a hospital full of victims of sarin gas has the time to tweet and make video calls. This will probably be dismissed and forgotten however.

Iraq: As Carnage Continues The Media Conspires To Gover Up The War Crimes Of Western Governments

Despite all the hand wringing, the pleas for joiuning hands and singing Kumbaya and the wailing and gnashing of teeth from the west's allegedly liberal media, broadcasters and newspapers are conspiring with government to cover up the involvement of western governments in what amounts to crimes against humanity.

War On Syria: Standoff Shows America Is No Longer The Global Superpower

So what's happening in Syria you might well ask? After the FUKUS Axis intervention plans were thwarted by Russia and China there seems to have been a news blackout although the devastating civil war continues to devastate Syria. The really big news however (bigger that J-Lo's arse) is that America has quietly been demoted from its position as main global military power.

Mainstream Media Ignores What UN Report on Syrian Gas Attack Actually SaidLast Tuesday (28 February, 2017), Russia and China vetoed a resolution put before the United Nations by the FUKUS axis (France, United Kingdom, United States)proposing increased sanctions against Syria. Their case was based on an OPCW-UN report on the Syrian government’s alleged use of chemical weapons in 2014 and 2015.

UK Govt Cash Funded ISIS & Al Nusra In Syrian Conflict
The Revolutionary Forces of Syria (RFS) media organisation, a propaganda operation for the US and NATO backed terrorist groups involved in trying to replace the secular Assasd regime with a Sunni Muslim theocracy is funded by the British government and is managed by Westerners operating out of Turkey, according to leaked emails.

Syria: Lies Of Obama And Kerry Cannot Hide Real Agenda
Humanitarian intervention my arse. The world's only terrorist state has been planning all out war in Syria since 2007, with Iran the next target once Assad's regine falls. Only the determination of Russian and China to stand up to American bullying can curb the genocidal imperial ambitions of The neo-Nazi Obama regime.

Al Jazeera Journalist Forced Out Of Job For Telling Truth About Syria.

Truth is the first casualty of any war it has always been said and it turns out that in these days of spin and deceit truth must die in order to gove warmiongers and mass murderers like Obama, Cameron &Co their excuse to go to war, as the Syria debacle shows ...

As the clamour for war against Syria gets louder in Washington, London and Paris, s anybody surprised that that evidence stacking up points to last weeks gas attack in Damascus having been instigated by the rebels or a third party with Israel emerging as the top contender ...

As FUKUS axis of evil prepares to attack Syria, Russia and China put on war alert

Another world shaking story that the free world's mainstream media chose not to tell us about even though it should have dominated newspaper headlines and broadcast news bulletins for months. It tells of how Russia and China knew of Military / Industrial / Banking New World Order office boy Obama's plans to start World War Three back in 2011. Everything their intelligence predicted has happened

Western media part of political elite, will never report Syrian massacre by US-led forcesThis blog has said for years news media in the west, particularly th USA and Britain are not independent; they are part of a corporate / political cartel the task of which is to shape public opinion, so that the policies of the ‘Shadow Government’, implemented by politicians, are accepted by the public,”

You would think Tony Blair would have enough deaths on his conscience after his pivotal role in starting the Iraq and Afghanistan failures but no, God's best friend is shilling for western involvement in another bloodbath, in Syria this time.

China has the back door.

In the previous post I reported that Russia had stationed six warships in the Mediterranean, presumably to deter US / Israeli / European ambitions to install a puppet govErnment in Syria and open the back door for a western strike on Iran

Slowly We Edge Closer To War

Forget all the politicians blether about positive meetings with Russian leaders and resolution of the Syrian conflict. Steadily the lines are being drawn, the trenches are being dug and the body bags are being stitched. You will not read about in ...

Obama's latest war is bogged down in Syria, in spite of the USA being supported by usual suspects, the United Kingdom and France the phalanx of Syrian allies which includes Russia, Iran and China looks a bit too formidable to persuade the limp wristed one it is safe to invade or start bombing. So all he has is a war of words, and he's losing that.

US Citizens Arrested For Criticizing Obama