We have reported many times on the neo-fascist insanity of Sweden's liberal left, who seem determined to take virtue signalling to such extremes they will destroy Swedish culture and nationhood in order to 'make muslims feel welcome'. In the latest example of this insanity, we learn a 32-year-old woman from Gothenburg in Sweden has been arrested, interrogated, had her DNA taken and now faces trial and imprisonment for the "crime" of sharing a humourous meme about Islam on Facebook.

She drew the attention of authorities after 'sharing' on her timeline the image below, which depicts a Muslim man having his brain removed and then being wrapped in Islamic head dress. She was not even the originator of the cartoon. 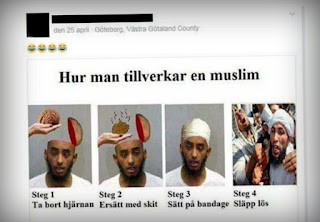 The captions read: How to Make a Muslim. Remove the brain. Replace with shit. Apply a bandage. Done.

While the meme is certainly in bad taste and may be offensive to some, what happened next conforms our allegation that the left will, if given absolute power, create an equivalent of the 'Thought Police' described in George Orwell's dystopian novel 1984. .

A buch of Swedish left wing activists who police facebook for 'hate speech' posted by Swedish nationals alerted police to the post, claiming that the woman had behaved "in a threatening manner" towards a protected group. They passed on details of the woman’s identity and the town where she lives. The woman was then asked to visit a police station in Gothenburg, where her DNA was taken and her details entered into a criminal database.

The woman profusely apologized for the post, claiming she thought it was aimed at members of ISIS. OK, but when did being stupid become a crime.

The Swedish authorities who can't catch rapists, murderers, arsonists or muggers are implacable in their pursuit of 'Though Crime' offenders, and proceeded to interrogate her on her attitude to Sweden’s "multicultural society" and whether she had "something against Muslims". The woman insisted she was against the Islamic State, not individual Muslims.

Gothenburg prosecutor Sara Toreskog was unimpressed and proceeded with charges of hate speech, and the woman now faces two years in prison. As we have exhaustively documented in this page and elsewhere, Sweden is an authoritarian, neo - fascist country that prosecutes people for satire, telling the truth and thinking for themselves. Let it be known that you have throughts and opinions that differ from the government diktat nd you are in big trouble.

Last year, a 70-year-old Swedish woman was prosecuted for hate speech for saying she saw migrants setting fire to cars, something that happens all the time in Sweden.

“Never Seen Anything Like This Before” – Sweden Stunned At “Unreal” Surge In Refugee Sex Attacks
As a direct result of Europe’s refugee crisis, new and very unpleasant social fractures have started to emerge. One particularly troubling issue is the extent to which officials have tended to “blame the victim” in the ever more frequent sex attacks resulting from Europe’s refugee surge, something we first touched upon earlier this week.

Worlds Biggest Luxury Liner To Be An Immigrant Hostel?

As if we did not have enough immigration problems to deal with as the inflow of illegal immigrants (or refugees and asylum seekers as our ruling elites insist on calling them) shows no sign of slowing.
from RT.uk:

WTF Is Going On In Sweden?

Street wars, crime gangs, grenade attacks on police stations? What has happened to the Sweden I know and love? “Sweden, that’s where they commit suicide and the king rides a bicycle,” a character in an Alan Bennet play famously said back in the 1980s, a reference to Sweden’s reputation as the most boring country in …

A new report has shown that the number of fatal shootings in Sweden is up to four to five times that in Germany and the number of hand grenade attacks is on par with Mexico. We have reported many times on how the ‘open doors’ immigration policy operated by the Swedish government for over a … Continue reading

As we have reported many times over the past year, Sweden has been more hard hit by the crimes and lawlessness of illegal immigrants from primitive third world societies than anywhere else in Europe. Even the Sweden hating socialists cannot ignore the epidemic of rape crimes, assaults and the general contempt for Swedish society, law, culture and traditions that illegal immigrants from Africa and the middle east have expressed through their actions.


(This all happened in Sweden, that beacon of multiculturalism and human rights.) Some 30 Muslim men thought that the woman was in violation of Islamic sharia law, by being in Sweden unaccompanied by a man. They thought that she should therefore be raped and her teenage son killed. Sometime during the night, the victim was awakened by the Iraqi as he raped her. The woman managed to break free and locate a train attendant. At first, the woman did not want to call the police. "She felt sorry for him [the rapist] ... and was afraid he would be deported back to Iraq."

Convert Or Be Beheaded’ – Chilling Message Posted Through Doors Across Sweden

The notes, which are signed “ISIS”, say that any non-believers will be decapitated unless they convert or pay a “jizya” (religious tax). They have been posted through letterboxes in several cities including the capital Stockholm. They carry the Islamic State banner and claim the police “will not save you from being murdered”.

European Governments Hold "Secret" Meeting To Dismantle Borderless Travel
Since the spring of this year, when numbers of migrant flooding across the European Union's border illegaly began to rise exponentially we have predicted that the resultant crisis would bring about the end of the Schengen Agreement - under which 28 EU nations operate open internal borders, unravels in the face of the overwhelming flow of refugees fleeing the war-torn Mid-East

Following a warning last night of an "imminent" terror threat in Brussels security services raised the country's terror alert to the highest level, plunging Europe, still reeling from last weeks carnage in Paris and gripped by fear and panic due to the honest reporting (at last) that the EU's politically correct 'open doors' immigration policy has allowed extremists hostile to European culture and our way of life to infiltrate European societies ...

Will somebody please tell these stupid, race obsessed, left – wing paskudniaks to shut the fuck up, whether you’re white or black it’s a privilege to live in Britain and if they don’t like our history or culture they can fuck the fucking fuck off Smiley Culture: Did he really shape Britain? (see below)

Group of Teenage North Africans Sentenced for Gang Rape Carried Out In Central Stockholm
A group of teenager immigrants from north Africa, living in Stockholm as refugees, have been found guilty of the horrific gang rape of a 23-year-old Swedish woman on the Södermalm island, a fashionable residential area in the Stockholm archpelago.

Submitted by Sieren Kern via The Gatestone Institute, Residents of Essen complained that police often refuse to respond to calls for help and begged city officials to restore order. One resident said: “I was born here and I do not feel safe anymore.” City officials flatly rejected the complaints. The Sarah Nußbaum Haus, a kindergarten …