The truth about Britain’s Covid deaths

In view of the hysterical repoting from mainstream media in print and broadcast news formats about the recently released report from The World Health Organisation containing estimates of Covid-related deaths internationally during the pandemic, one could be forgiven for suspecting we are all dead and nobody bothered to tell us. The measurement used to crank up the fear and panic generator to eleve has been the decidedly dodgy 'excess deaths' which is the difference between the number who died of all causes during the pandemic and the number who, on average, died in that period of the year and geopolitical region before the pandemic struck. This enabled sceptics to make comparisons between the British figures and excess deaths for the rest of Europe per 100,000 of the population. And when this blog and other people who have done so crunched the numbers it turns out The UK is not, after all, at the top of the death-league by miles because we all died, some of us several times. In fact the UK sits around the middle of the European excess deaths Champions League.

This is similar to the outcome when, a few weeks ago, the UK Office of National sStatistics (ONS) revealed that around 19.2 million people in ENGLAND alone (i.e. not the whole UK,) have not had a single shot of the non vaccine that does not protect anyone from COVID but appears to make them more vulnerable. The propaganda put out by governments and dutifully parroted by television news and the papers that only 3 million ignorant, irresponsible people continued to pose a threat to the (vaccinated) majority by refusing a single dose of the clotshot.

Though the methodology used to compile the report has attracted serious criticism from neutral statisticians, what really struck most of us alt_news sceptics has, predictably, been ignored by authors of any of the media reports and commentaries on the report I’ve seen, which have all focused on our outcome relative to those of other European countries. We did better than Italy, Spain and Germany but worse than France (but can the cheese eating surrender monkeys' figures be trusted?) when throughout the pandemic media reports had been spun to create the impression that we were doing exceptionally badly. 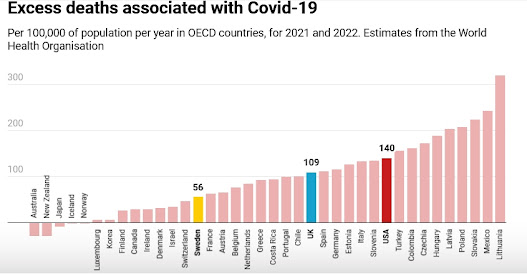 What's really interesting however, is while we are not much different to most of our near European neighbours, Italy, Germany and Spain, for example, had excess deaths respectively of 133, 116, and 111 per 100,000. Britain’s figure was 109. Even the United States was only 140, just ahead of Italy. Differences in the way countries counted or how they defined excess deaths could easily account for the variations in numbers. When we look at the figures a from a different angle, firstly, it is difficult to spot any obvious correlation between the pandemic--suppressing measures taken by different members of the WHO, and the outcomes in terms of excess mortality. This suggests we should have been more suspicious about the measures imposed by governments (lockdowns, mask mandates, travel restrictions etc.) as on the strength of available evidence that none had been successful, which is what epidemiologists who did not have a financial relationship with the companies that make up the Big Pharma Cartel, the World Heath Organisation, national governments or the Bill and Melinda Gates Foundation, the philanthropic charity that has made $£€billions out of the pandemic, had predicted.

Mask-wearing was far less common in Sweden than in Britain, yet we had twice as many excess deaths, though most Swedes live in urban environments, like us. There’s a strong case for serious and exhaustive study of the role of masks, and of the harm they may have caused particularly to people with respiratory problems. We should be demanding that before such measures as mandatory making and lockdowns are imposed again there are controlled trials involving the study of human volunteers. There seems to be some kind of academic horror at this kind of scientific rigour, the sciencetits who rather worhip their mathematical models of a human population, a virus and a pandemic..

Many of us among the 19.2 million vaccine refusniks lost confidence in health advice from doctors, government agencies and media 'experts' a long time ago because it was established in proper scientific trials years ago that surface contact (touching stuff) does not constitute a a significant risk of contracting a virus. In spite of this official advice on washing out hands and using sanitizers rich in carcinogenic chemicals has not been corrected, there remain (at some economic and environmental cost) signs and hand-gel dispensers everywhere, wipes are still being distributed and cleaners are still prancing around dabbing at bannisters and hand-holds. It is a similar story on wearing masks, studies in 2020 showed that the cheap masks handed out everywhere did nothing, zro, zilch, to prevent or slow the spread of COVID and even the more expensive surgical masks had little effect. Yet bot kinds of mask had significant adverse effects relation to non COVID related problems. Why should we believe a government agency, scientific research establishment, academic institution on anything else, if the official advice on this has not changed and they are still pushing these completely ineffective measures and clamouring for more lockdowns which are now known to not only have been an economic disaster but also triggered a pandemic of mental health problems?

Here, though, is the thing that should not have shocked me (because the figures were broadly known) but did (because I did not know them). Some 109 excess deaths per 100,000 in Britain may be twice Sweden’s rate – but it’s still tiny! That’s about one person in a thousand. I had not properly understood how light the casualties have been in the developed world. And though it’s sad when anyone dies at any age, the average Covid-related casualty in Britain has been in the last ten years of his or her expected life, so viewed in terms of years lost the damage is far less severe than that inflicted by epidemics that target the young as well as old.

Yes, yes, ‘one death is one death too many’ etc, and no, I didn’t know these victims personally and if I had I might feel differently. All true enough. But how I feel is not the point. We do need to be able to count. When we count dispassionately we see a pandemic that took relatively few people away. Looking at the past 30 years, the pandemic did cause a sharp year-on-year difference, but there have been others.

Yet in trying to slow its spread (we were honest about that limited ambition, unlike the Australians, New Zealanders, Chinese and South Koreans) we took a two-year wrecking ball to our economy and to the educational and job prospects, not to say the mental health, of millions of our young people.

Rishi Sunak Reveals How Boris Sold Us Out To Big Pharma and Globalism
it seems most people in Boris Johnson's cabinet during the run up to lockdowns were kept in the dark about many things, including the fact that 'The Science' on which lockdown policy was based was not science at all. Government was effectively reduced to a “quad” of ministers and their 'scientific advisers' deciding on Britain’s future. Rishi Sunak, at that time Chancellor of the Exchequer (finance secretary) was one of them. There were rumours at the time that Sunak repeatedly warned that lockdowns would inflict economic damage that was likely to endure for decades.