In a week that has witnessed controversy in the UK after an advertisment for The Church Of England, showing somebody reciting The Lord's Prayer was banned from being shown in theatres where the new star Wars film is being shown by the movie's distributors, which prompted us to ask how would Christians feel if Jedi Knights invaded a church service and used The Force to make bibles and hymn books float around and gargoyles sing bawdy songs, it is perhaps time to revive this post: 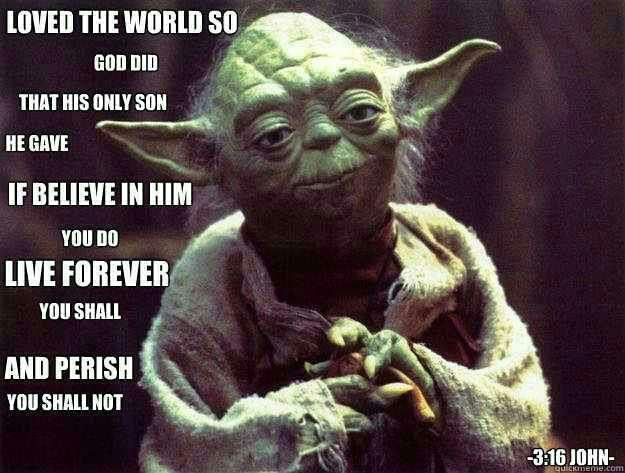 Yoda Gets Christianity (Image source)
New guidelines issued by the Greek Orthodox Church bar former gynaecologists, lawyers, actors and magicians from ordination as priests. The detailed list sets out acceptable jobs for candidate clerics, including former carpenters, teachers, nurses, politicians and former officers in the police and military. Other considered unacceptable include tavern owners, money lenders and astrologers. Alas we could not discover whether nail technicians are excluded or not.

Now I can see the logic in wanting former carpenters after all there is a connection, but there seem to be a few anomolies here. Why politicians and not actors, surely there is little difference in the two trades. Actors spend all their time pretending to be someone they are not and politicians spend theirs pretending to be something they are not. Neither can I see why teachers will be accepted but not tavern owners. Most of us learn far more in the pub than we ever did at school. And why are astrologers not welcome, to go from astrologer (or Jedi Knight) to priest simply involves swapping one kind of unreality for another.

Magicians too seem to be very well qualified. "I want to to put this biscuit in your mouth and then take a little sip of wine as I say Abracadabra, and it will turn into the flesh and blood of the Messiah. Just like that. Lawyers too are ideal.

"I put it to you that on the third of May Mrs Papadopoulos and yourself went to the Corinthian motel and indulged in various lewd acts. Do not deny it Mr. Leandros, there are witnesses. You were seen by the hotel receptionist, the chambermaid and God.

Gynaecologists however is understandable. Who could know better that what most men think is heaven can look pretty unattractive in some circumstances.