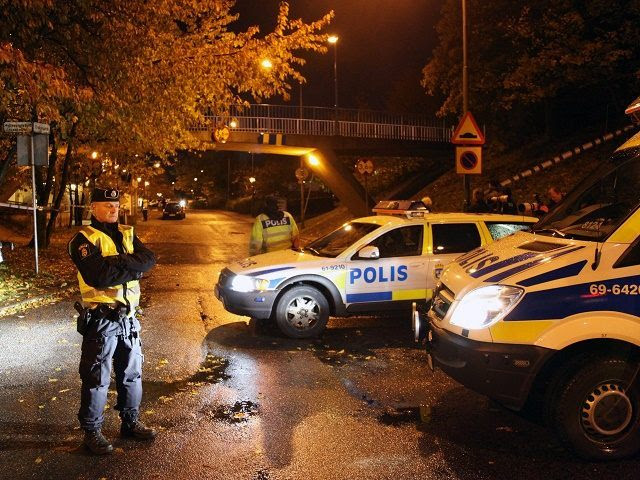 Sweden is on the verge of social and economic collapse due to the influx of migrants facilitated by the country's 'open doors' immigration policy, the Swedish foreign minister has said. As 190,000 migrants so far this year alone pour into a country of ten million population, law and order is beginning to break down as the country plays witness to numerous arson attacks, stabbings and gang rapes, mostly committed by recent immigrants.
Swedish foreign minister Margot Wallstrom has warned that Sweden cannot continue to take migrants at the present rate without social services breaking down. In an interview, Mrs Wallstrom said: “I think most people feel that we cannot maintain a system where perhaps 190,000 people will arrive every year – in the long run, our system will collapse.
There is also a strong feeling outside the metropilitan elites that multiculturalism has failed, with different interpretations of traditional laws being applied to the crimes of Muslim migrants, particularly in respect of some horrifying rapes in which the government and judiciary have taken the line that is anathema to western feminists when applied to rapes committed by white mem, "She was asking for it."
In Europe and north America is is accepted that women who go out alone with hair and faces uncovered, who wear short skirts and revealing tops are behaving quite acceptably. Why then are european women, particularly in Germany and Sweden being told they must not do such things because Muslim men from remote and primitive take is as a message that the woman is offering herself for sex.
Wallstrom, having started well, then fell off the rails by calling on other European Union member states to take on more migrants in a bid to relieve pressure within her own country, but said: “I have to admit that there have been moments recently of very great disappointment. I have heard statements from member states that have been completely astonishing and very discouraging.”
Yes Margot, you self righteous idiot, other European states are opposing the stupid, guilt addicted left's approach to migrants because they have seen stupi Sweden and Ga-ga Germany being turned into third world country by these illiterate, lazy, sex - crazed scum that the elite want to dump on civilized societies. We owe these people nothing. There is no place for them in a civilised society.
Once thought of as one of Europe’s most peaceful nations, Sweden, now known as the rape capital of Europe, is rapidly becoming a fragmented nation, at war with itself. Almost 26.8 per cent of the population is now foreign born or has at least one foreign born parent. With no way to assimilate such large numbers, the outcome has been the creation of ghettos in which crime and extremism are allowed to flourish.
Malmo, which just two years ago played host to that most unifying of events, the Eurovision Song Contest, now has “no-go zones” from which African and middle eastern criminal gangs have excluded police, fire fighters, ambulance services and all government officials except those who hand out money. Last month, retired Chief Superintendent Torsten Elofsson told Breitbart London: “We have a number of no-go-zones in Sweden and they are expanding… police can go to these places, but you have send armed groups of officers.
Malmo has witnessed a spte of grenade attacks and shootouts in the past year
“Years ago you could go with two officers, no problem. Now you have to send at least four officers and two cars – if the fire brigade want to go, they have to take a police escort. They throw stones and try to stop the fireman from putting out fires.”
He added: “Of the number of people arrested and dragged into police stations, the majority are of foreign origin to be honest. There is an over-representation of violent crimes committed by people from other countries”.
The city has also seen grenade attacks similar in style to those seen in the middle east, gang rapes, and fatal shootings.

A news feed filled with reports of the rape and assault of Sweden’s young women, some inexplicably streamed live on Facebook by the gang as they attacked. Other reports filed quietly away in a box marked unmentionable: the rape of a 12-year-old unaccompanied immigrant by a so called fellow 'unaccompanied minor' immigrant who later bragged he was 45.

Lawless Immigrant Chaos Accounts for Quarter of Swedish Police Resources
Police officials in Värmland, Sweden have revealed 25 per cent of their time and resources are consumed by dealing with the lawlessness of illegal immigrants, as the Swedish government yesterday announced a further two billion Swedish Krona for policing to 2020. Chief Superintendent Lars Serenander estimates that around a quarter of police time is spent dealing with issues related to migrants ...

A Mob Of 'Foreign Youths' Assault 35 Females At Swedish Music Festival"
The number of sexual assaults in Europe as a result of the refugee crisis has been something that we have covered extensively, notably the "monstrous" attacks by men "of Arab or North African origin" that occurred on German women in Cologne during a New Year celebration (that led to the members of left wing parties in Germany's ruling coalition actually trying to have the word "rape" removed< from internal reports, because multiculturalism. Immigrant criminals and Swedish criminals are viewed differently in the eyes of Swedish law.
We ask why it is, in Sweden, that when a Swede kills two immigrants it is an act of terrorism that shames the nation, but when an African immigrant kills a Swedish mother and her young child, in the eyes of the government it is somehow the victim's fault? The big concern is that, given the desperation of our Conservtive and Labour party leaders to make us more European, such politically correct insanity will be inflicted in Britain next.
Immigration Crisis Moves Swedish Politics To The Right
Latest Posts