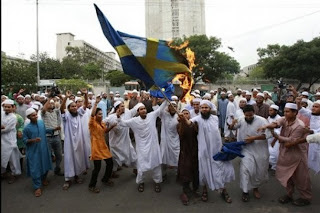 Muslim migrants to Sweden show what they think of their host country.

The conference, which was hosted and launched by Swedish Prime Minister, Stefan Löfvén, was rife with anti-White ideology, such as the statements in the above image.

The slide in the image above says:

“1. Immigration is nothing new.”

“2. We are all a consequence of immigration.”

“3. There is no indigenous Swedish culture”

This made people quite upset on social media.

Ingrid Lomfors is the woman standing at the podium in the picture, and she has a very conclusive past, which makes it obvious that she is anti-White to the core.

During the conference, Prime Minister Löfvén called on them to welcome fake refugees. He also offered “special entrance” into the “100 club“, a business club for businesses who give 100 fake refugees a job.

“Companies that provide at least 100 new arrivals the opportunity to show what they can do in the labor market have a special entrance to the Employment Service and together tailor to initiatives which create opportunities for the companies to receive the new arrivals.“

Notice how he calls them “new arrivals” – that’s now the politically correct way of saying illegal immigrants and fake refugees.

Going back to the anti-White rhetoric in the image, one thing worth pointing out is that they deny Swedes (and White people) exist, because then they cannot be accused of White Genocide against Swedish families.

Angry Foreigner video in which a Swedish national vents about the rape of his country by its own ruling elite who are apparently intent on pursuing a 'white genocide' immigration policy.

Sweden’s Mollycoddling of Rapists Blamed for Surge of Sex Attacks
Once known, as one of the safest and most orderly countries in the world, in recent years, thanks to an idiotic 'open doors' immigration policy, Sweden has now earned the unenviable title of 'rape capital of Europe.' The politically correct elite's view that they were being good 'global citizens' by allowing unvetted, undocumented, uneducated migrants to flood into their peaceful and pleasant land from many of the most violent, mysogynistic, racist, and sectarian trouble spots in the world, where western values are despised ...


Syrian Doctor Makes More Trafficking Migrants to Greece Than He Can Doctoring
A former doctor from Syria has described how he now makes £60,000 a month trafficking people from Turkey to Europe. He has warned European Union (EU) member states that the refugees will continue to come even if all the borders are shut, saying “They will dig tunnels if necessary.”
How Neo - Con and Neo - liberal Globalism Freaks Are Destabilizing Europe According To Plan
A study by our owner/ editor of how the USA led global markets project has destsbilised the middle easdt and why that outcome looks as if it was the long term plan all along. Libya, Syria, Ukraine, Yemen, Afghanistan, Iraq and now Europe ... all are strategically important and all were potential obstacles to Washington's world domination ambitions.

Muslim Only No Go Areas For Police And Emergency Services In Our Cities? - It Already Happened In Sweden.
Sweden continues to lead the way in surrendering its nation, culture and self respect to extremist Muslim dickheads, reasoning that the violent rapists and murderers of the religion of peace will thank them rather than kill them all. but the people all over Europe are waking to the betrayal of their elites.

Syrian Girl's Video exposes western Politicians and Media Lies About Refugees
This girl makes more sense than Obama, Cameron, Hollande, Merkel and all other western criminals and corporate hirelings put together, Maybe one day they will realize that their subservience to zionism only leads ruin of their individual characters!

Christianophobic’ Hate Crimes Treble in Five Years in Multicultural Paradise Sweden
Immigration omnibus
Immigrant tide increases rapes in northern Europe
Immigration: The Mediterranean Boat People
Immigration and how it degrades hospitals and schools
Immigration and benefits
How Hungary made a stand against EU immigration policy disaster
Immigration is marginalising Europe's white working classes
Calais has its very own immigration crisis
Europe is not offering a promised land for immigrants
Sweden's national suicide by immigration
UKIP lead the way in standing up to Euronaziism on immigration
Europe's Immigration crisis omnibus
Philo and Sophia - philosophy menu
Populist Authoritarianism
Broken Societies
Equal Rights Campaigners Not Christians Are Imposing Their Belief On Others