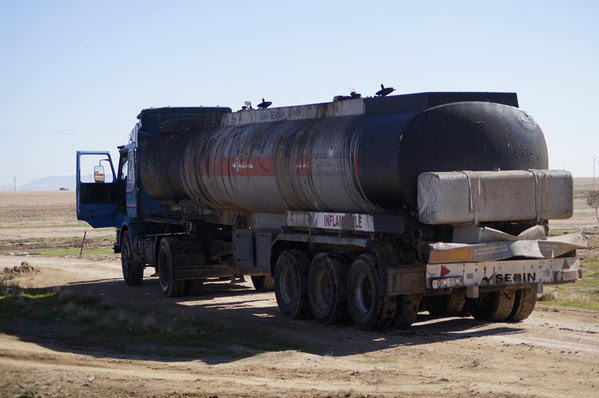 A tanker in the Syrian Desert. Turkey has been buying oil from ISIS for over a year (Source: Pakistan Defence
Over the past few days we have been doing our best to expose the malfeasance and covert Islamism of the regime of President Recep Edrogan in Turkey, and how members of the Edrogan family have been involved in smuggling ISIS oil shipments to markets in the west, and delivering weapons to ISIS and Al Nusra terrorists in Syria.

"This kind of an incident which may happen of course will further push us to take measures. … Of course it will be an aggression against our rights of sovereignty and it is a natural right of [Turkey] to protect those rights," Erdogan said.

Last Tuesday a Turkish F-16 shot down a Russia Su-24, claiming that the aircraft violated its airspace. Russian officials and the Su-24 pilot, who survived the crash, insist that the plane did not cross into Turkey. The crew, according to the pilot, did not receive any warning prior to the attack.

The Su-24 was involved in Russia's counterterrorism efforts in Syria aimed at assisting Damascus in its fight against ISIL and other extremist groups trying to overthrow Bashar al-Assad.

Erdogan refused to apologize for the incident, which Russian President Vladimir Putin referred to as a "stab in the back" committed by "accomplices of terrorists."

It is now thought the Turkish attack on the Russian aircraft was revenge for Russia bombing convoys of tanker trucks delivering crude oil from wells in ISIS held territory to oil terminals in Turkey where it is laundered into western markets. It is illegal for any nation to trade with terrorists, but Islamic State, not being a true nation with the financial responsibilities that involves, can undercut the OPEC nations and thus fund their ongoing war.

The question is, with NATO so determined to have a war, how long will Putin's patience hold.

To Join Obama's Proxy War Against Russia In Syria Would Be Cameron's Greatest Folly
A look at our prospects should tway - boy Cameron succeed in obtaining parliament's approval for his wish to join Obama's coalition of dodgy political opportunists in their attempt to overthrow Syria's President Assad. Given that Putin has said many times, Assad stays, our outdated war planes don't stand an ice cube in hell's chance against Russian S34s and Growler Surface to Air missiules (SAMs). And that's without factoring in China's pledge to support it's allies Putin and Assad.

The War On Terror
The war in Iraq and Syria
Bombing is not the way to age war on ISIS
The French coalition may make ISIS retreat but cannot beat them
Washington admits ISIS is a US creation
Syria: Obama's proxy war against Russia
US and UK hypocrisy on Syria
Syria is now the biggest US foreign policy blunder ever