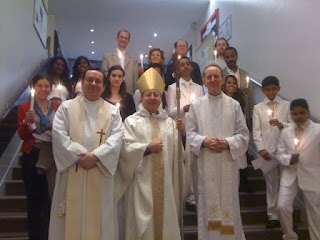 
Currently there are five black, Asian and ethnic minority (BAME) clergy in leadership positions within the Church, of which John Sentamu, the Archbishop of York, is perhaps the best well known, the Guardian has reported. In addition, approximately three per cent of the last general synod – the Church’s parliament – were from ethnic minorities. A breakdown of the new synod, which has just been elected, has not yet been released.

The figures are in line with the general makeup of the Church’s professional body – 2.8 per cent of clergy overall are from ethnic minorities. There are no statistics on how many ethnic minority congregants worship within the Church of England each week, but the fact that Pentecostal churches, attended predominantly by black Christians, are thriving has been highlighted by those seeking to make a case that the church is institutionally racist, driving congregants away.

They say that the lack of ethnic minority people at the front of England’s churches puts off ethnic minority Christians from worshiping there, and have called for the Church to be more inclusive. (Source: Breitbart, London)

Church Of England accuses itself of institutionalised racism?

And this incorrigible old atheist has gone through most of his irreligious life thinking self flagellation was just a Catholic thing.

Liberal and socialist guilt addiction brings to mind the "we are not worthy" scene in Wayne's World" which is high comedy but does reflect the kind of inferiority complex inflicted on people by the politically correct, culturally Marxist education provided by state controlled education systems. .

Liberals and socialists are guilty of course, guilty of treason, and they deserve its traditional punishment. Especially since they want to drag us all down to a kind of politically correct hell on Earth in which we are all condemned to spend our lives apologising for the (imagined) sins of our forebears.

Rather than allowing The Church of England to introduce racist and homophiliac employment policies that discriminate in favour of ethnic, religious and sexual minorities, all applicants for the clergy should be required to read The Screwtape Letters by C S Lewis. The story takes the form of a series of letters from a senior demon, Screwtape, to his nephew Wormwood, a junior tempter. At one point, reference is made by Screwtape to other juniors as to what they will specialize in. One replies, (I write from memory): I will make men believe that Evil does not exist, to which Screwtape replies, You will have every success. We must picture hell as a state where everyone is perpetually concerned about his own dignity and advancement, where everyone has a grievance, and where everyone lives with the deadly serious passions of envy, self-importance, and resentment.” (C.S. Lewis, The Screwtape Letters)

The Church of England (which was always irrelevant to me and many others) becomes more irrelevant with each day that passes, thanks to the weak, effete, angst - ridden hand-wringing of politically correct bishops and other senior clergy it has seen fit to elevate over the past decades. It is now just one more political enterprise, whose leaders have abandoned the notion of serving communities in favour of serving their own interests and their own self righteousness, much like the majority of registered charity organisations, the directors of which line their own pockets and live the high life on expenses while ensuring very little of the available revenue goes to doing good.

The C of E's problems seem manifold and a total craptangle, until you realise that the fundamental cause is simply that they are no longer primarily Christian. They are definitely religious, but, like the Roman Catholic church and all other hierarchical ecclesiastical organisations which crave political influence in the modern world, any residual commitment to the core values of Christianity itself has to compete with any number of other 'practical' considerations. They are as much the Church of Community Cohesion, The Church Of Multiculturalism, or the Church of Human Rights and Social Justice, as they are a church of believers in Jesus. Worthy, perhaps, but no more Christian than any other philanthropic organisation.