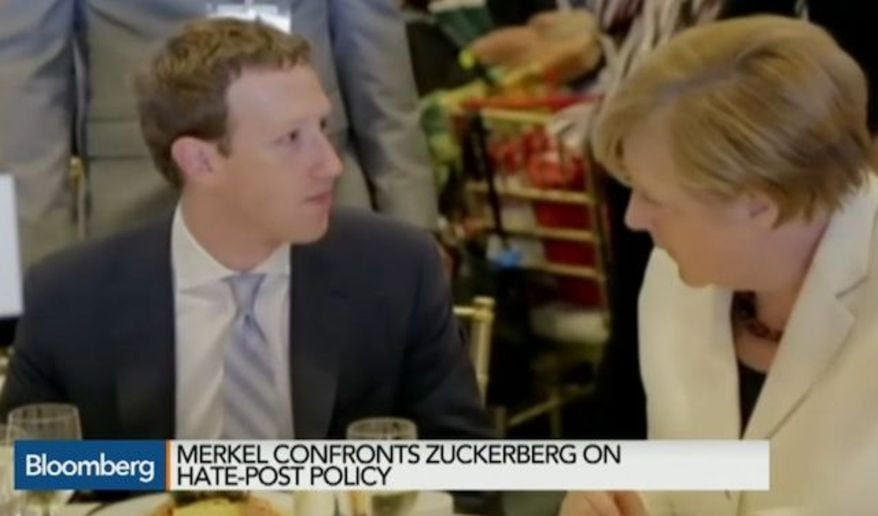 Zuckerberg and Merkel: Two questions, (1) Why is is this opportunistic little sociopath discussing policy with elected leaders? (2) Who elected him to say what we can and cannot read online? (Image source)


Over the past couple of days we, and many other New Media outlets reported the horrific incident in Cologne, Germany at New Year, in which a crowd on male, recently arrived immigrants, all of Arab or North African appearance according to witnesses carried out a mass attack on German women who were simply trying to use the railway station. At first the story was completely ignored by mainstream media, but the outcry following internet news and opinion sites getting the story out finally shamed television and print news organisations into reporting the outrage.

What is going on, you might well ask, because we often hear of crimes committed by recent immigrants from Africa and the middle east against Europeans, particularly in Germany and Sweden, two countries noted for their 'open doors' border control policy (i.e. no policy at all, just let anyone in).

Politicians in most other developed nations, where the political establishments tend to be in the pockets of global corporations, are as eager to facilitate mass immigration as Germany and Sweden, but are constrained by public opinion.

One of the most dangerous trends however, given the amount of control a few entirely self interested internet technology corporations exercise over what we see online, is the tendency of companies like Google and Facebook to collaborate with the neo - fascism of leaders like Germany's Hausfrau - Volksfuhrer Merkel in suppressing all honest discussion of the problems cause by immigrants who refuse to respect the laws and culture of their host nations.

In December 2024 The German government demanded of social media giants Google, Facebook and Twitter that they automatically remove what Hausfrau - Volkfuhrer Merkel's government refers to as anti-migrant ‘hate speech’. As we have since learned, the German government's definition of 'hate speech' covers any criticism of its immigration policy, any comment on the refusal of many migrants of a certain religion and from certain parts of the world to accept German law or acknowledge that in Europe women who go out alone with their hair uncovered are not prostitutes, or even the truthful reporting of crimes committed by immigrants. In other words, with help from Google, Facebook and Twitter, Hausfrau - Volksfuhrer Merkel's government is following Hitler's Nazi regime by banning free speech. The ban is having its first real test in the wake of the sickening sex attacks in Cologne over New Year’s Eve.

Anyone in Germany appalled by the scenes we in New Media described however, will find it difficult to express their disgust online because it will be branded as hate speech by the Berlin political class. Major social media sites have said they would work to delete any German anti-migrant sentiments distributed on their networks within 24 hours after a removal request has been made. In fact the Jewish Quisling Mark Zuckerberg, founder of Facistbook, has committed his organisation to working with governments to suppress all discussion that does not comply with the dictum of political correctness.

The internet giants have agreed to apply domestic laws, rather than their own corporate policies, to posts, comments and links to posts. Users in Germany, a country in which there is already considerable civil unrest due to the problems caused by immigrant's behaviour, are expressing disgust at the policy which came from German Chancellor Angela Merkel’s office.

Last September, Ms Merkel was overheard confronting Facebook founder Mark Zuckerberg over the issue, with Mr Zuckerberg replying “we need to do some work” to remove offensive posts, Wired reported. He agreed to collaborate with the German leader on the issue and is now encouraging other national leaders to impose similiarly authoritarian restrictions on free speech.

The restrictions and censorship are not going unnoticed. “It’s not politically correct to say anything against migrants. We don’t have freedom of opinion anymore. #Cologne,” Tweeted a German user from Hanover.


New German Government Smartphone Spyware Will Monitor Citizens’ Calls, Typing AND See Through Their Camera Lenses
The German Interior Ministry has revealed a new “Bundestrojaner” or government trojan horse software that will enable security agencies to track the smartphone activities of anyone who downloads it. We understand Chancellor Merkel's government has also adopted an “off the shelf” tool from a company which is said to help authoritarian regimes track their citizens ...
Politician Blasts Conviction For Speaking The Truth On Anti-Semitism In Europe
A Danish politician has been reprimanded for posting comments on Twitter about the-much-commented-on-in-mainstream-media resurgence of anti semitism in Europe. Apparently while hand wringing and breast beating about violent attacks on Jewish people and vandalising premises of Jewish owned businesses is fine, stating the absolutely effing obvious by linking the Europe migrant crisis to this new wave of anti Semitism is a criminal offence.The Right To Tell Politicians To Eff Off In An Age Of Self Appointed Censors, and Compliant Media
Our right of free speech is increasingly under attack from control freak politicians, politically correct left wing activists and the dark forces of corporatism.Sharia courts creating dual justice system in UK?
As if we did not have enough immigration problems to deal with as the inflow of illegal immigrants (or refugees and asylum seekers as our ruling elites insist on calling them) shows no sign of slowing.
from RT.uk:

The Spy In Your Smartphone
An article in OS news opens by saying those of us with experience in digital technology have known about the nasties hidden in your internet enabled computers and gadgets for years.This is absolutely true. Why did people like me not sound the alarm then, you might well ask?
Latest Posts
Free speech - most of our posts