The Revolution Is Spreading: Now Austria Turns Against The Anti - White Leftist Elite 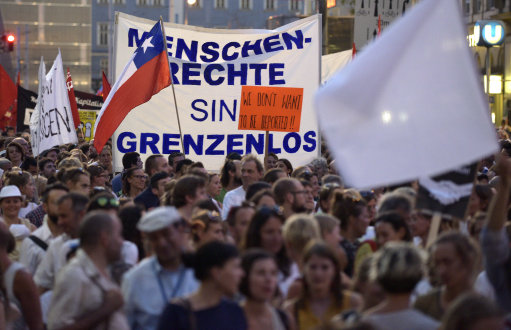 Migrants in Vienna have blocked railway stations and roads, demanding transport to Germany
With Sweden's coalition of opponents, formed to deny a place in government to the anti - immigration, pro - Swedish culture party The Sweden Democrats a place in government that was their democratic right, with France's Front National, led by Marine Le Pen topping polls and other parties opposed to mass immigration and the destruction of European culture riding high elsewhere, Austria has become the latest nation where voters have turned their backs on the consensus politics of Cultural Marxism.

The Austrian Freedom Party (FPO) which strongly opposes the mass migration engineered by the EU and supported by all European integrationist leaders appear to be on the verge of winning control of the municipal authority of Vienna, a city which has consistently voted socialist since the end of World War 2.

With citizens' concerns about the influx of Muslim migrants and its long term consequences growing, Viennese voters are turning to the FPO en masse. In latest polls the party is now only one point behind the city’s governing socialist democrats, within pollsters margin of error.

FPO leader Heinz-Christian Strache addressing a rally of FPO supporters outside St Stephen’s Cathedral on Thursday said: "Let’s roll up our sleeves and do this, out of love for our home town, out of love for the people of this city! We will succeed, I can feel it."

In the last round of elections, five years ago, the FPO was over 18 points behind the victorious socialists. Now they are statistically even, with the momentum of anger at the unchecked arrival of illegal immigrants behind them, raising the possibility they could find themselves in control of Vienna's city government. Even if the FPO emerge as the largest party however, the socialists are likely to try to form a coalition of opposites as happened in Sweden, to make sure the status quo is preserved. Such is the contempt of the political elite for democracy, constitutional law and the people.

Whatever happens in Vienna's City Hall, a strong performance by the FPO would shake the foundations of Austria’s political establishment, with Vienna typically regarded as being so left wing and politically correct that it has often been referred to as Europe's “red city”. Unfortunately being left wing does not buy Viennese women any indulgences with Muslim extremists, if in town alone they are still considered prostitutes and impure women who deserve to be raped.

One Viennese FPO supporter told The Local she had not been able to find a “real job” for the past four years. She explained why she was voting for Strache: “This time we stand a chance of being heard. People realise that the real defender of workers’ rights is him.”

More than 200,000 people passed through Austria last month, forcing the country to reinstate border controls along with Germany, Slovakia and the Netherlands.

In June 2015, the FPO joined with France's Front National and the Dutch Freedom Party to form the Europe of Nations and Freedom group in the European Parliament.

Europe: E U the enemy of democracy?

Is Immigration crisis a US bid to destabilize Europe

The Globalization of serfdom

Immigration: The crisis in Germany