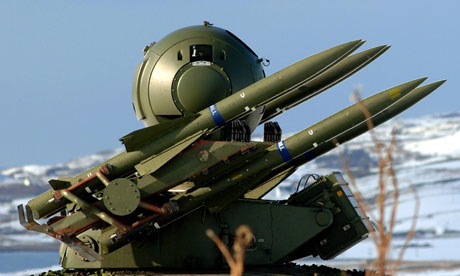 We learn from the English Language news site The Japan Times that manufacturers of armament is the USA are struggling to keep up with demand as US involvement in the middle east's multi faceted conflicts grows. but when we look at the money the 'industrial' bit of the military / industrial complex puts into US politics, it is hardly surprising US Politicians are so hawkish.

This story confirms the report we posted yesterday on the beneficial effect middle east conflict is having on the profits of those corporations that supply armaments and munitions to the US Military. In his dystopian novel "1984" George Orwell introduced the concept of perpetual war, and like so much that Orwell foresaw, it seems to be coming true.

Top U.S. arms makers are straining to meet surging demand for precision missiles and other weapons being used in the U.S.-led fight against the Islamic State group and other conflicts in the Middle East, according to senior U.S. officials and industry executives.

Global demand for U.S.-made missiles and so-called smart bombs has grown steadily since their use in the first Gulf War. But the United States and a host of allies are now rushing to ensure a stable supply of such weapons for what is expected to be a long fight against the Islamic State group, whose rise has fueled conflict in Syria and across a swath of the Middle East.

U.S. officials say arms-makers have added shifts and hired workers, but they are bumping up against capacity constraints and may need to expand plants or even open new ones to keep weapons flowing. That could create further logjams at a time when U.S. allies are voicing growing concern that Washington’s processing of arms sales orders is too slow.

The Islamic State’s deadly attacks in Paris last month have added urgency to the U.S.-led bombing campaign against the group in Iraq and Syria. The campaign had resulted in 8,605 strikes at an estimated cost of around $5.2 billion as of Wednesday.

Meanwhile, a Saudi-led coalition that includes Bahrain and the United Arab Emirates and backed by Washington is carrying out a 9-month-old military campaign against Iran-backed rebels in Yemen. Gulf states are also supplying U.S.-made arms to rebels fighting Syria’s government in that country’s 4-year-old civil war.

“It’s a huge growth area for us,” said one executive with a U.S. weapon-maker, who was not authorized to speak publicly.

“Everyone in the region is talking about building up supplies for five to ten years. This is going to be a long fight” against the Islamic State.

As this blog has always said, the US Government loves war because war is good for business. Read more in Japan Times >>>