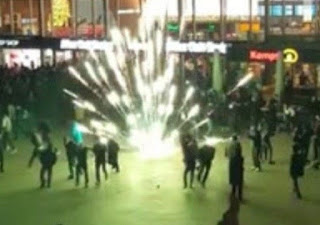 Though the story had been ignored by mainstream broadcast and print media, it has emerged that rioting immigrants rampaged through a railway station in Cologne, Germany, on New Year's Eve, brawling, attacking German citizens, sexually assaulting women and looting or vandalising shops. So far just five arrests have been made by German police. An estimated 1,000 migrants flooded into the station to celebrate by letting off fireworks in crowds and sexually molesting German women unlucky enough to be caught up in the melee.

Dozens of German women are reported to have been molested and “raped”, while many men have been assaulted and robbed. In Hausfrau - Volksfuhrer Merkel's police state it is dangerous for German men to defend themselves or retaliate because federal authorities appear to have handed immigrants a free pass to ignore European and national law and do as they please, while being very eager to charge German's with 'hate crime' on the most trivial of grounds.

One sexual assault victim, 28 year old ‘Katja L’ spoke of an ordeal suffered by herself and three companions as they tried to reach the waiting room of Cologne railway station. Katja, two other girls and a male companion in the early hours of New Year’s Day. She told Der Express, one of the largest regional newspapers: "When we came out of the station, we were confronted by a group of"exclusively young foreign men." Keeping close together the small group carried on:

"We tried to walk through this gang of men. There was a gap through them which we headed for. First I felt a hand on my buttocks, then hands on my breasts, I was touched and groped everywhere. It was a nightmare. Although we shouted and hit at them, the men did not stop. I was desperate and think I was touched around 100 times in the 200 meters. Fortunately I wore a jacket and trousers. a skirt would probably have been torn away from me".

Katja L and other witnesses who have also come forward to complain said, as they were being molested by the migrants the men were laughing and pulling hair, and there were shouts of “ficki, ficki” (fucky fucky) hurled at them as they were called "sluts" and "whores". Katja L said she had been groped by so many men she would be unable to positively identify any of the molesters to the police.

These young men from barbaric third world cultures who, thanks to corrupt regimes pursuing the politically correct 'open doors' immigration policies demanded by corporate globalism in order to flood developed nations with cheap labour and uneducated workers who will not question abuses of their civil rights because they have come from areas where civil rights and liberties are an alien concept, have many times proved themselves incapable of living alongside civilised people. They do not appear able to rid themselves of the notion that European women who go out unaccompanied by male family members, with hair uncovered and wearing skirts are all prostitutes or the equally offensive idea that it is not against the law to rape a woman you believe to be a prostitute.

Others women in Cologne were less lucky than Katja. One woman had her tights and underwear torn off by the crowd, and a police source said there had been “rapes” at the station that night. This is as yet unconfirmed but accords with reports of the epidemic of rapes committed by Muslim migrants on European women that have been recorded from court cases in Germany and Sweden.

Up to now police have identified 80 victims of the night of savagery, 35 of whom were women subjected to sex attacks. Others, both male and female were assaulted or robbed. Police and prosecutors suspect there are more cases from the night still to be reported, and are appealing for victims to come forward.

A press conference hosted by Cologne’s chief of police Wolfgang Albers this afternoon confirmed the attacks had been perpetrated by recent immigrants, all of whom were carrying official immigration documents according to police officers who dispersed the crowd. Mr. Albers said "the crimes have been committed by a group of people who mostly come the North African and Arab countries", and that the situation had now become "intolerable". The press conference was reported by news agency Associated Press but so far has not been picked up by television and national press.

Erika Steinbach, human rights spokesperson for Angela Merkel's CDU party, has been criticized after she posted a picture that appears to predict that in 14 years' time, white people will be in a minority in Germany. Steinbach faces criticism after she tweeted a picture with the caption 'Germany 2030' that depicts a crowd of dark-skinned people curiously asking a single white child where she is from.
USA Extends Drone war To Africa
So why we wonder is the USA taking its drone war against the third world into deepest, sub Sahran Africa? There cannot be any reason for it, the cited aim of neutralising Boko Haram is not valid because boko Haram are not a standing army but a guerilla force that strikes and then melts away into the civilian population.
Europe Rape Epidemic caused by immigrants
Sharia law zones in European cities
Immigration omnibus
Germany Immigration Problems
Sweden's national suicide by immigration
Ed Butt's page on Germany's Immigration Crisis
Latest Posts
Elsewhere:
[Boggart Blog]...[Little Nicky Machiavelli]... [ Ian's Authorsden Pages ]... [Scribd]...[Wikinut] ... [ Boggart Abroad] ... [ Grenteeth Bites ] ... Ian Thorpe at Flickr ] ... [ Tumblr ] ... [Ian at Minds ] ... [ The Original Boggart Blog]