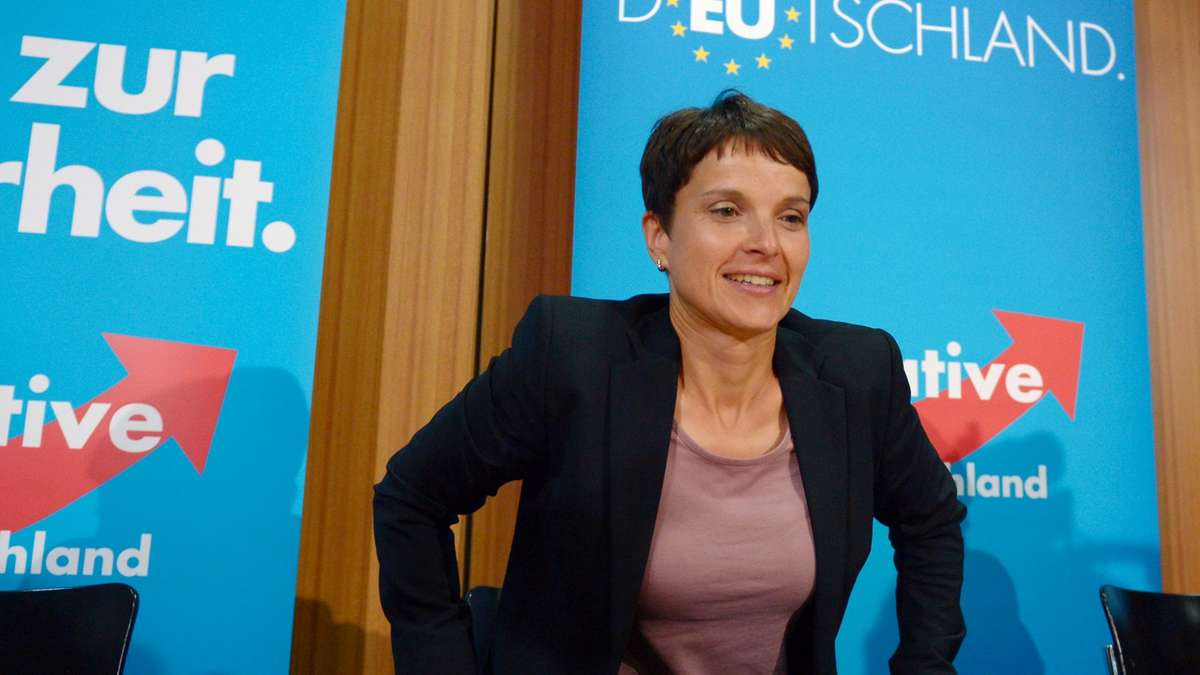 AfD leader Frauke Petry (better looking by far than Hausfrau Vollksfuhrer Merkel although this is not her best angle) has called for the Chancellors resignation over the immigration crisis.
German Chancellor Angela Merkel has blamed opponents of her open doors immigration policy for the rise in crime, particularly rape and sex crimes committed by Muslim immigrants . Hausfrau - Volksfuhrer Merkel said in an interview on the immigration crisis that the anti-immigrant Alternative for Germany (AfD) party, stirs up prejudice and polarises society.

Her comments, made in an interview with the Bild am Sonntag newspaper, reflect rising panic among Germany’s mainstream parties at the surge in popular support for the right-wing AfD and its fierce opposition to Merkel’s refugee policy.

Merkel faces the electoral test that could trigger her downfall in three regional elections on March 13. The AfD is set to win almost 20 percent in the eastern state of Saxony-Anhalt and match the ruling Social Democrats in the southwestern state of Baden-Wuerttemberg, according to opinion polls.

“The AfD is a party that is not bringing together society and not offering the appropriate solutions for the problems, but it is stirring up prejudice and polarising,” Merkel said.

Merkel said government officials and mainstream parties had to challenge the AfD in public debate by clearly distinguishing themselves from its anti-immigrant stance. The centre-right chancellor defended her decision to keep Germany’s borders open despite the influx of migrants and reaffirmed her push for a joint European solution, including strengthening the continent’s external borders and cooperation with Turkey to stop refugees from travelling on to Europe. This is just bullshit of course because Merkel has been pushing to fast track the increasing Islamist state of Turkey into the EU, a move which under EU rules would open the gates of Europe to Turkey's 90 million Muslims and any others the Turkish government was prepared to allow through their territory.

As we have reported many times on Turkey's illegal trade in oil and arms with ISIS, you can bet the government of Recep Erdogan will not be doing the west any favours.

The EU emergency summit with Turkey scheduled on Monday will focus on how Ankara was planning to spend 3 billion euros pledged by EU member states to stem the flow of migrants to Europe, she said.

Leaders should also discuss how EU member states could help Greece to cope with “this difficult situation”, Merkel added.

Austria, one of the last stepping stones to Germany for hundreds of thousands of migrants, recently imposed border restrictions, setting off a domino effect in Europe and leaving tens of thousands stranded in poor conditions in Greece.

The move, which was publicly criticised by Berlin, reduced the number of new arrivals to Germany.

Merkel Should Braced For Disaster As Polls Conflict On Election Prospects
Regional elections in Germany are more unpredictable than ever before, and they could have a big impact on the fate of Chancellor Angela Merkel and her party, the Christian Democratic Union, Deutsche Welle reported, according to opinion polls ahead of Sunday's regional elections in the country.
Britain Unable to Deport Undocumented Migrants
If their asylum applications have failed it is because there is no reason to suspect they face death or imprisonment if they are sent back to their country of origin. So we give them a choice, we'll give you a free passage home or you can work dor your living shovelling shit on a pig farm. These people come to us as supplicants and beggars can't be choosers.
What Hausfrau Mekel Did Not Tell The German Voters Before They Handed Her A Third Term
As anti EU feeling grows and German citizens get angry about the immigration disaster, no wonder Hausfrau - Volksfuhrer Merkel is not happy. And German taxpayers will not be happy when they find out what crazy financial commitments are about to be dumped on them by the EU's poorer members.
Will Merkel’s Migrant Disaster Drive Germany’s AfD Into Power?
German Politician Predicts White Germans Will Be A Minority. Faces Calls to Quit.
Merkel Isolated As Europe Splits Over Refugee Crisis
Migrants Mass At Greek Border Waiting To Cross Into Europe
New German Government Smartphone Spyware Will Monitor Citizens’ Calls, Typing AND See Through Their Camera Lenses
Germans Cheer As Refugee Center Burns
EU Refuses to Block Eurozone Integration to Reach Agreement With UK
German Government To ‘Create’ 100,000 Subsidised Migrant Jobs That ‘Pay’ Just €1 An Hour
Spain Faces Constitutional Crisis: Podemos Spurns Coalition Deal With Pro - EU Parties