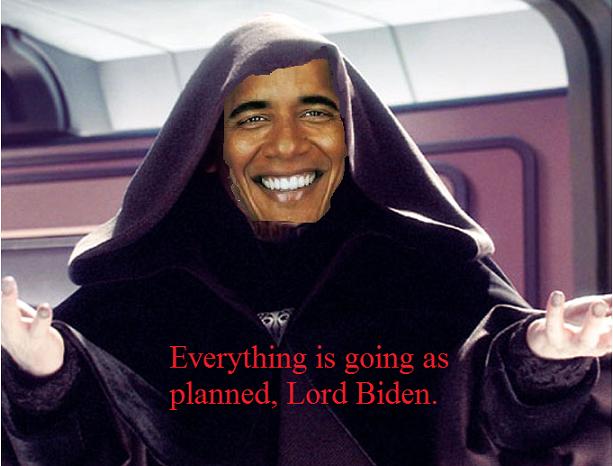 Although it seems Sidi Barack Hussein Obama, the wannabe God - Emperor of the world and President Of The Entire Universe and everything Else Besides is still planning to visit Britain in late April to tell us all of HIS vision for Britain's future as a province of the US State of Greater Germany with Europe, British voters are not exactly overwhelmed by the prospect.

The original leak of information that he had invited himself to address both houses of parliament on the issue of why HE wanted Britain to remain in the EU, which would not be in Britain's interests but would be in the interests of Obama's puppet masters who are pushing towards global government, provoked a public backlash and was seized on by Boris Johnson who told the American President to focus on solving America's many problems and keep his cocaine dusted nose out of Britain's domestic politics.

Most people, but not everyone agrees with Boris, who seems to have emerged as de facto leader of the 'Brexit' campaign. Surprisingly The Daily Telegraph, which one would expect to be the most robustly pro - British newspaper is carrying a lot of propaganda from the 'Remain" campaign.


Obama shouldn't be barracked into silence about the EU

The US President shouldn't tell Britons how to vote, but here's what he should say instead:

Brexiteers have launched a preemptive attack on Barack Obama’s UK visit, telling him to keep his nose out of the EU referendum. Boris Johnson, Steve Baker and Peter Bone are three Tory MPs who’ve argued as much. That suggests they are worried that the US president, who is reported to be planning a trip to Britain in late April, could swing votes in favour of Remain.

Obama needs to be careful about what he says. It is not his place to tell the British people how to vote. But, as leader of the free world and a friend of Britain, he has the right - and arguably even the duty - to spell out some home truths about geopolitics. The President shouldn’t zip his mouth. Here’s a draft of what he could say. Read full article >>>

Now you may think there is nothing to take exception to there, Hugo is just expressing his opinion (which of course, as a supporter of free speech I would defend his right to express) but where the piece becomes propaganda is very early on, in this phrase:

"But, as leader of the free world and a friend of Britain, he has the right - and arguably even the duty - to spell out some home truths about geopolitics"

Two points leap out:
(1) Obama has shown he is no friend of Britain, if there was any doubt after his first term his support of Argentina's claim to the Falkland Islands proves beyond doubt he hates our country.
(2) His foreign policy disasters especially on Libya and Syria show he is absolutely the last person whose advice on geopolitical issues we should listen to.

Though I, as an avid opponent of the European Union ever since I worked on an Information Technology project for the EU in the mid 1980s and witnessed at first hand the waste, the empire building of department chiefs and the backstabbing that reduces every worthwhile initiative to a meaningless compromise aimed only at extending the power and increasing the size of the bureaucracy, would expect the majority of Britons to have the good sense to ignore the most disastrously incompetent president the USA ever elected, propaganda can be hard to resist.

So check in here regularly and search 'Europe' or EU for our latest posts on developments in the disintegration of Federal Europe, as not only Britain but many other member states, alarmed by the increasing authoritarianism of the Brussels bureaucrats turn towards the exit. Obama can screw himself, Briton's should understand that what is good for the USA and its wish for war with Russia, is bad for Britain and the rest of Europe.


Elsewhere:
Don’t Trust The Turks
As EU leaders meet the Turkish Sultan President Recep Tayyip Erdogan,prepared to offer him whatever he asks for, on top of the five billion Euros he has already trousered in return for Turkey’s empty promises of help in controlling the flow of criminals, rapists, people traffickers and jihadists refugees from all over the middle east, Asia,and Africa Syria ...

Brexit: Britain's future in or out of EU?
Should Britain leave the EU and or remain and surrender even more of our national sovereighty to the unelected bureaucrats in Brussels. The campaign to keep us in the EU, led by Prime Minister David Cameron, has become know as Project Fear, the Europhile having only scaremongering arument to back their case. At the moment, due to the immigrant crisis caused by the Shengen Zone open borders area and 'open doors' immigration policy,
After The Brexit The Frexit;1 in 3 French Voters Want Out Of The EU
America's bid for global hegemony failing
American leadership fails to inspire brave new world
EU Membership Vote in UK to Paralyze Decision Making
Obama's hashtag diplomacy
Obama, not Russia, the real danger to world peace
Delusional Obama thinks he can unite Europe