The point of this UK based blog being called Boggart Abroad is that unlike our original Boggart Blog, now called, rather imaginatively we like to think :-) The Original Boggart Blog because the closure of our platform forced a shift to Wordpress, is that we reach out from our home in a peat bog in the north of England to the rest of the world. We're get a lot of traffic from the USA, have followers in Canada, Mexico, Brazil and Venezuela, and in France, Germany, Russia (we're big in Russia), Poland, Ukraine, Spain and Portugal, and though our geographic stats only show our top ten nations for the week, we get readers in smaller numbers from many other nations.

We like to feel we are in our small way, champions of democracy, free speech and individuals' right to self determination. Therefor, as one would anticipate, we are totally opposed to the undemocratic, increasingly authorotarian EU. And with good reason, as we are constantly reminded. One such reminder over the past few days has been the reaction of EU Commission President Jean Claude Juncker (aka Jean - Claude Drunkard because of his (alleged) habit of consuming brandy for breakfast) and the President of the EU Parliament, (the EU has three Presidents, a bureaucracy has to do everything in triplicate), to the victory of an anti - immigtation, anti - EU candidate in Austria's presidential election (this result may be overturned in a mandatory second round of voting, and the EU will be doing all it can to rig the poll.) 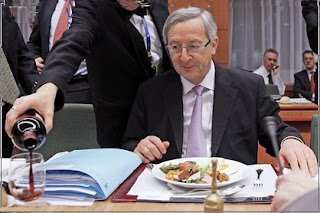 European Parliament President Schulz warned Austrian voters against a Freedom Party of Austria (FPO) victory in the country’s upcoming presidential election, claiming the “vast majority” of people do not want national borders. One has to wonder what planet this former alcoholic has been living on for the past twelve months as the rise of anti - immigration parties that campaign for open borders has dominated politics in France, Germany, Denmark, Sweden, Hungary, Poland and to a lesser extent in Britain where UKIP are well established and Spain where Podemos, a left wing party opposed to uncontrolled immigration became the largest party in an inconclusive election in December, 2015.

Die Presse reported yesterday that speaking with Italian radio station RAI 3, Mr. Schultz said he believes the vast majority of people in Europe "do not want the change he believes electing an anti-mass migration president would bring. He added that this “silent majority”, who also apparently oppose national borders, should mobilise against the FPO "for Europe".

In a press release, General Secretary of the FPO Herbert Kickl, rejected Schulz’ “interference” in the Austrian elections, calling it “totally inappropriate”. Mr. Schulz’ comments came soon after the President of The European Commission (the administrative arm of the EU ruling bureaucracy) Jean-Claude Juncker slammed elected leaders of European Union (EU) countries for listening too much to voters rather than focusing on being "full time Europeans".

The Telegraph reported that the European Commission president blasted Britain’s Prime Minister, David Cameron, for not speaking about Europe "in the proper way" and instead discussing the EU in terms of national interests.

"If you are listening to your national opinion you are not developing what should be a common European sense and a feeling of the need to put together efforts. We have too many part-time Europeans," the former prime minister of Luxembourg told the audience at Rome’s Capitolini Museum.

Who TF does Juncker think he is, this jumped up pipsqueak of a a country Luxembourg that is beautiful and brews great beer (I used to work there for the EU) but about the size of a postage stamp. Luxembourg, like so many mickey mouse EU countries, has no significance in the world and so has lost nothing by surrendering its national sovereignty to the EUSSR.

On its own, Luxembourg is nothing, nor are Belgium, Latvia, Estonia, Lithuania, Moldova, Slovenia. On our own, we did EVERYTHING (almost) and still found time to save Europe from tyranny at least three times World Wars 1 and 2 and the Napoleonic War. Royal Navy ruled the world's oceans for 400 years (from when Drake routed the Spanish Armarda to 1918), ruled a QUARTER of the globe (not just by force folks, impossible for such a small island) by intelligence, character & consent, launched the Industrial revolution, and invented the steam engine the jet engine, railways, computers, gave the world its finest literature, its most popular music, produced loads of Nobel prize winners in the sciences and humanities and much more. Other European nations did great things, France, Italy, Spain, Portugal, The Netherlands, Greece (OK, a long time ago admittedly) and Austria, where the advance of the Ottoman Army of Sulymun The Magnificent was halted at the Seige of Vienna, even little Malta played a pivotal role in turning the tide of World War Two (but it was a British colony at the time). Germany, the wannabe hegemonic power of Europe wasn't even a proper country until 1870 and while there are mny notable German achievements particularly in electronics, engineering and technology, they don'yt make up for those two world wars.

And the Luxembourg has produced that gives the former Prime Minister the right to lecture Britain and those other great nations of European history? What? WHAT!??? NOTHING. Nada. Well OK, they gave the world Blue Nun wine.

So please Luxembourg, I loved your radio station back in the day although I'd rather forget about "Under The Bedclothes With Jimmy Savile", but today, compared to the greats of British politics who shaped European history, Churchill, Lloyd George, Atlee, Gladstome, Disraeli, Wellington, Walpole, the Cromwell boys, Tommy and Ollie and, it has to be said even though it hurts, Margaret Thatcher , an ex-Luxembourgois leader lecturing us on our place in the world is like a mouse saying 'Come and have a go if you think you're hard enough,' to a Lion. So please, Jean Claude Drunkard, you go ahead with your plan for a German-dominated Europe by yourselves, piss on the graves of those brave Bohemians and Burgundians who gave their lives to preserve the independence of their microstate and hold back the advances of the Prussians and Bourbon French as their incessant wars raged.

Schulz BTW is a failed German bookseller's employee; an ex-alcoholic* from the Aachen region and as thick as p*gsh*t as any Member of the European Parliament will tell you. But Hausfrau - Voksfuhrer Merkel likes him because he is good as following orders (something of a national trait I'm told.)

Can you imagine anything more dire having a drink with him?

Alcoholism on his CV is probably what attracted Juncker the Drunkard's attention.

Leaked Papers: White House Resorts to Blackmail To Save TTIP Trade Treaty
Europe Rejects Obama Doctrine - US Exceptionalism Is Not Acceptable
Copenhagen Swamped With Foreign Criminals - Prompts Calls For Strong Border Controls
US Threat to Businesses Scares EU Members As Summit On Continued Sanctions Nears
EU IN TURMOIL: Hungary threatens REBELLION against Brussels over forced migration
After The Brexit The Frexit;1 in 3 French Voters Want Out Of The EU
Brussels Reaction to Dutch EU-Kiev Deal Vote Heats Up Brexit Issue
EU Membership Vote in UK to Paralyze Decision Making
EU / Tukey Migrant Crisis Deal One Veto Away From Being Wrecked