According to a report in The Washington Examiner, governments are showing increasing interest in tightening rules on political speech on the web (this is not just a trend in the USA, the British, German, French and Swedish government have openly considered criminalising dissident opinions posted online concerning climate change, open borders immigration policy, vaccines, NATO foreign policy and globalist trade treaties such as TTIP. Their case is that dissident voices enabled by "new media" have become too influential and are making the task of government more difficult as they try to 'steer the world in the right direction'. 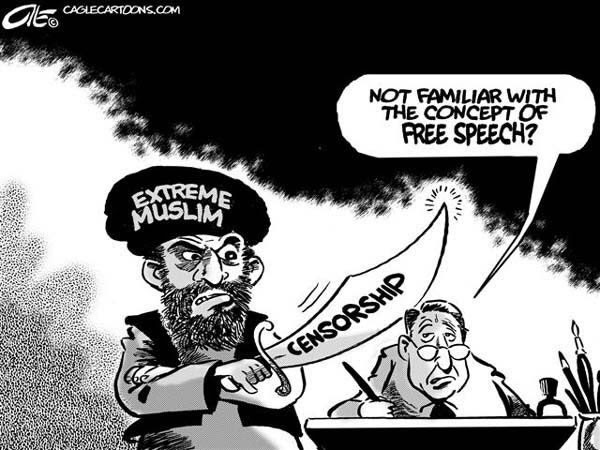 (Image Source:
iranpolitics.com
Should they succeed, experts wonder whether such censorship could impact more traditional media as well, especially in how it relates to conservatives and Christians, the report explained.

"The best example we can give is going back a few years to when the [Federal Communications Commission] was looking at trying to silence talk radio, which was obviously a realm of conservatism," said Drew Johnson, executive director of the nonprofit group "Protect Internet Freedom."

He was referring to the agency's "Fairness Doctrine," which required broadcasters to grant equal time to opposing political candidates.

US Democrats on the Federal Election Commission showed similar regulatory ambition when they voted to apply campaign finance laws, which are traditionally intended to govern paid political advertisements, to unpaid political accounts on Twitter.

"The Twitterverse has carved out for itself a unique and increasingly important role in American elections and political debate," Democratic Commissioner Ellen Weintraub wrote in support of the effort, adding that she believed it "reasonable to count Twitter profiles as among a political committee's websites."

The effort failed narrowly when the commission split along party lines. Had it succeeded, Republicans warned, it could have been a gateway to regulating traditional media (a trademak of the authoritarian 'left').

Some conservatives agree that the Internet has changed the nature of media, but not in an auspicious way. "We're not seeing the best and the brightest anymore," said Jason Lewis, a 25-year talk radio host who retired from his syndicated broadcast in 2014.

However, he added, "Someone in their pajamas in the basement can say and write anything he wants without much consequence. The good news is that not very many people will read it."