Greenhouse Gas Facts - Not For The Thunberg Cult


When was methane first identified as a greenhouse gas? When did we begin to realise that it accounts for up to a quarter of all global warming?

Paul Noel, former Research Scientist 6 Level 2 UAH Huntsville Al. (2009-2014)
Answered Wed
Upvoted by Chris Anderson, MS Environmental Science & Energy, University of Houston (1989)
There are no such thing as “Greenhouse Gases”. No gas blocks the wind and no gas provides a selective frequency mirror for IR. Sorry but if a gas doesn’t do those 2 things it isn’t a Greenhouse Gas. That is the function of a greenhouse.
Methane is emitted into the atmosphere naturally by the billions of tons daily. It doesn’t build up because it degrades almost instantly by oxidation into CO2 and water. The rate is so fast in just over 4 hours it is only 1/1,000,000th of what it was. Sorry but if anyone tells you otherwise they are lying. 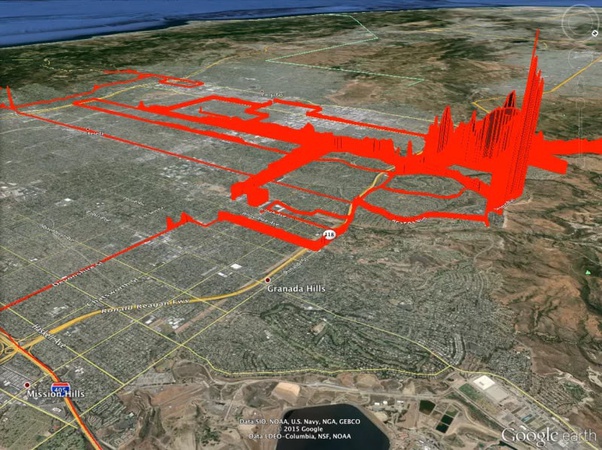 This is the graphic of methane detection from the greatest natural gas leak in US History. Note it doesn’t even reach the sea 20 miles away. Remember every sewer head in the city is leaking massive quantities of methane. NO DETECTION! In simple terms methane cannot ever be a problem. It isn’t one now either.
In fact the people who push this will not tell you the true role of methane in the atmosphere. In fact we wouldn’t have an ocean or an atmosphere without methane.
Methane rises in the earth from very deep within the earth. It encounters metal oxides such as Iron Oxide, Sodium Oxide, Calcium Oxide etc. When it does it undergoes Dehydrogenation synthesis. This process frees up oxygen and water while making oil and some CO2. The gases and oil continue to rise in the earth until they surface. TAR PITS HOMEPAGE . There they oxidize and form CO2 and Water. There is the source of the Oxygen in the Air and water in the oceans. Oxygen made into CO2 enters phytoplankton in the oceans and makes sugar and oxygen. The zooplankton eats this and through a bunch of cycles they secrete carbonate shells die and sink taking the carbon down to make limestone that is everywhere. At the same time it leaves the oxygen in the atmosphere.
The accompanying gases of Nitrogen Argon and Helium 3 prove this cycle. Helium 3 leaves the atmosphere into space. Nitrogen is almost 80% of the atmosphere and Argon almost 1%.
Now Methane is not an insulating gas in fact it is a refrigerant gas(R50) as is CO2 (R744). This fact is used by the oil industry to make LNG for export with methane and many modern refrigeration systems use CO2 as the gas for cooling. Industrial CO2 Refrigeration Systems, the “New” Natural Refrigerant for Large Scale Refrigeration Projects… - CoolSys
http://www.ou.edu/class/che-desi...
Everything you are reading on this topic by the environmentalists ignores the fact that the temperature of the atmosphere is a function of air pressure. It is exactly what makes a diesel engine work! https://www.augusta.k12.va.us/cm...
There is absolutely no Greenhouse Effect from any gas. Water does insulate but only as a liquid not as vapor. CO2 and Methane are worthless as insulators
This is pure science and hard science. There is no opinion here. The people who object to such do not know what they are talking about.

We have previously highlighted this report from Finland which exposes the great flaw in "the science" of global warming. The link at the end of this extract takes you to a much more complete account of the research project which, not for the first time debunks the fake science on which the politically - motivate climate change scare.

Fellow Slams The Royal Society as Nothing But a Lobby Group for Climate Change.

Another respected scientist comes out and denounces the science behind the climate change scare as a fraud. The whole thing has been a scam to justify punitive taxes on fuel and enable the rich to make fortunes trading carbon credits. Again it shows what a sack of rogues the climate science community really are.

The clean, green, save the planet machine and the worshippers of Greta Thunberg tell us that China is the world's biggest investor in sustainable energy and has more wind turnbines installed than any other nation. It is the worst kind of lie because it is true, but only tells half the story. And sometimes being told half the story creates completely the wrong impression ...

I've had many arguments with the Warmageddonists, the people who have been saying that if we did not shut down all coal, oil and gas related activites the earth was going to turn into a giant furnace and we would all burn. When the scaremongering first started, the deadline for frying was "after dinner". Then it got to "Tomorrow ...... or the day after tomorrow perhaps," then "next year", "before 2050," and eventually "soon."

What if man-made climate change is all in the mind?

If our view of reality is shaped by the mind and our perceptions of information, how successful are attempts to manipulate the perceptions of the whole populations through manipulated data, spin and assertions of authority likely to be. As scientists and politicians moan that the public no longer take sertiously climate change scare stories, we have to conclude, not very.

The freethinkers and Libertarians of New Media have been questioning the pseudoscientific certainties of the global warming lobby for a long time. During that often acrimonious process (because the Global Warming lobby are ever bit as organised and as driven by blind hatred of those who question them as the Bearded Queens In Bridal Gowns lobby) and most of us have been accused of infanticide, genocide and worse. At last the respectable climate scientists (the ones who didn't sell their arse for the corporate dollar) are speaking, and the media are listening.

Scientists all over the world are busy creating extremely bizarre human-animal chimeras. Once again The Daily Stirrer has to say "We told you so". There is something very creepy and sinister embedded in the typical scientists desire to play God. It is a complete, psychopathic disregard for moral boundaries. If we can do it that ...

UK Offshore Windfarms Produce More Rust and CO2 Than Electricity
A private case going through a British court of arbitration at the moment involves two very large supply organisations.
Unfortunately the case is being heard away from the prying eyes and radar like ears of the media. A 1996 Act Of Parliament enabled such things as a way to free up Court time taken up by complex technical disputes…. And, perhaps, to keep embarrassing truths away from ...

A few weeks ago an item on the BMA's website linked to the "Doctors against climate change" group of the doctors' trade union. This body of medico-environmental socialist - utopians stated ...


The Two Faces Of The Politics Of Failure

What a mess the modern way of doing politics based on a politically correct consensus and social engineering has produced. The daily stirrer looks at how the bipolar left - right divide stops things getting better rather than helping get the developed world back on track.