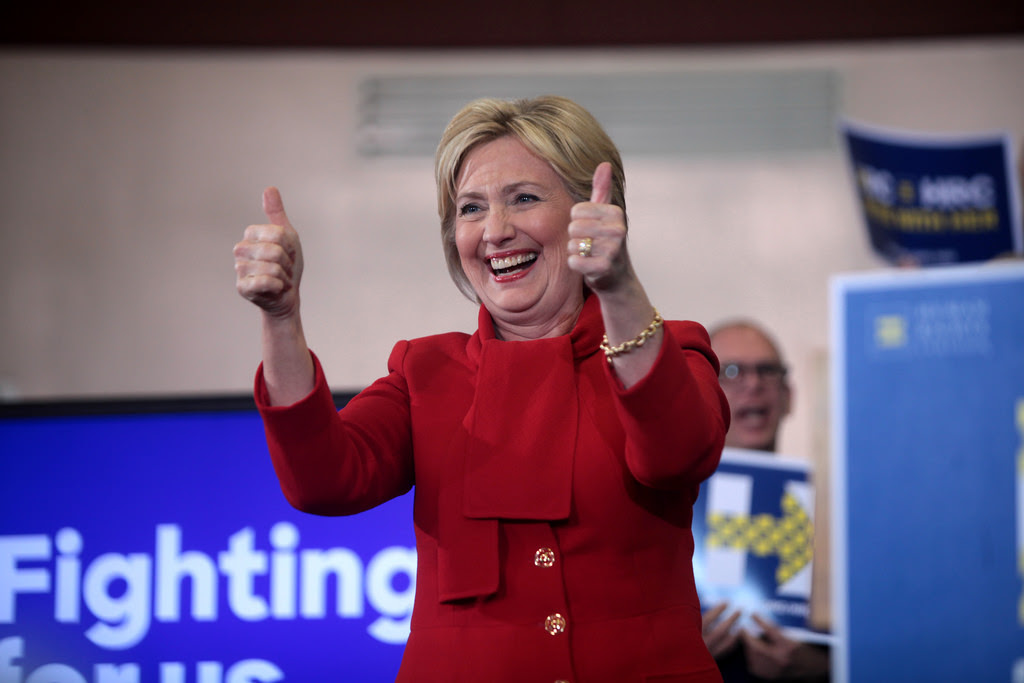 Hillary Clinton: her tendency to gloat does not raise her ratings in the popularity stakes (image source: Nina Illingworth)
As we have been chronicling the downfall of 'Crooked Hillary' as Donald Trump has taken to calling her, after this blog was first to use that sobriquet to the best of our knowledge, we wanted to be among the first to bring you this story. (we've called Mrs Clinon a few other things as well, not because we believe we, as British bloggers, have a role to play in US politics (unlike your president who seems to think HE has a role to play in the politics of Britain and every other sovereign state in the world), but because we do not believe that with international relations poised to delicately on the brink of global war right now, the world could not survive even one year of Killary's self interested, egomaniacal, war hungry incompetence.

As we have reported previously, the FBI has been on Mrs Clinton's case for around a year now over the way she blatantly flouted the law while serving as Secretary of State in the Obama Administration. Now, just as she looks to have beaten off (with the aid of some very dubious tactics it has to be said,) the challenge of Bernie Sanders to be assured of the Democratic Party nomination, it looks as if her biggest opponent will not Donald Trump but the FBI.


The latest news on the FBI criminal investigation into Hillary Clinton’s 'alleged' use of a private email server is that while The Feds have been quiet for a while the assumptions of Killary fans that the Obama Administration had protected 'the anointed one' from the consequences of her criminal negligence was misplaced. FBI sources informed Fox News’ Catherine Herridge (video embedded below) that Hillary Clinton is about to be in serious trouble.

Representative. Mike Pompeo, who sits on the House Intelligence Committee, told Fox News:
"I can assure you the intelligence committee is working on determining the scope of any breaches that may have resulted from the improper handling of classified information, and the damage assessments that go with them. I think we all understand that we had classified information in channels that weren’t secure on Secretary Clinton’s homebrew server and that risk was associated with that."

Then, Herridge explains that her sources say the FBI investigation has reached the stage that "federal regulations require damage assessments after classified information is outside secure government channels, such as a personal server." In other words, the Feds are assessing how serious the breaches were. As our previous reports have suggested, when the issue was first raised Mrs Clinton was dismissive of suggestions that she might have broken the law. Well, she's been getting away with breaking the law so long she probably thought it did not apply to rich, powerful people.

If Pompeo and Herridge's 'souces' are correct, then the FBI is currently determining determining the extent to which classified information was mishandled… We have used 'allegedly' because charges have not been laid yet, but clearly security was breached, as leaked the documents from the private server included more than 22 emails that were marked "top secret and above." Hillary claims she did not know 'top secret or above' means 'only to be seen by people with the highest security clearance'. For a crime to have been committed it is not necessary to prove unauthorised people did see the classified information, only that they could have seen it.

In any even the fact that the server was hacked and the email data obtained by unauthorised personnel it pretty irrefutable evidence of wrongdoing. And as a qualified lawyer, Hillary Clinton of all people should know ignorance of the law is no excuse.

Once that current stage of the investigation is complete, the FBI will have no other choice but to go after Hillary Clinton.

This is a political earthquake that could change the entire 2016 presidential campaign, as the video below will confirm.