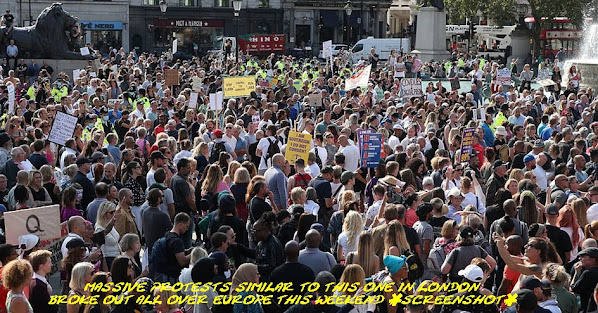 After a weekend of increasingly violent protests around Europe, similar to the one pictured above in London, against elitist plans to introduce new limitations on freedom, lockdowns and further steps towards compulsory vaccination (with a vaccine that does not immunise against a virus that makes very few people ill,) it is disappointing to see that in the US and UK, mainstream media is still doing its best to ratchet up the fear and panic (which has been ratcheted up way past eleven for well over a year.

To understand where we really are with the elitists complete failure to deal with the faux - pandemic we need only look at the adjusted data from the UK's Office of National Statistics, (ONS) regarding excess mortality...the only reliable number now available to us.

Sweden, which did not lockdown and only warned citizens to use their common sense, is now, 52nd on the global list for excess deaths. It seems the much maligned Prof Tegnell, the Swedish government's chief medical adviser, was spot on with his advice on how to deal with the pandemic.

This Swedish data supports the experience of most of us who, having heard the tales told by fans of authoritarianism about how most of their friends and family who were not vaxxed had died in agony, gasping for breath, have ignored propaganda for masks, vaccines and social distancing as well as the dire warnings that if we did not get jabbed we would certainly die because the killer virus was everywhere.

We unvaccinated have tried to carry on as near normally as possible, bring it it on, we told the whining Willies and snivellijng Susans as they told their takes of rotting corpses piling up in the streets. And we are still here, still yelling, 'Bring it on' as the politicians bluster and threaten, scientists lie and media parrots endlessly regurgitate fake news.

Looking at the data available, which only runs from January 2020 to June 2021...the Swedish excess death numbers are in negative territory, deaths from all causes for that period in Sweden are more than 2% BELOW the latest 5 year average.

BTW...if you compare the population adjusted numbers for all nations from which reliable date is available, the 2020-2021 excess deaths are lower just about everywhere, than at any time prior to 2009.

Amazing isn't it, how the real figures differ from those used by globalist propaganda mouthpieces.

Austria Days Away From Imposing Lockdown On The "Shameful" Unvaccinated Says Chancellor SchallenbergAustria's globalist Chancellor Schallenborg said today that the government would shortly give the go-ahead for a lockdown of unvaccinated people, to be introduced in the two highest-incidence regions from Monday and possibly also nationwide [...] This would prevent people without proof of full vaccination or recovery from Covid-19 from leaving their homes except for essential reasons.
Continue reading >>>

SStarmer Outs Himself As More Fascist Than Boris Bonkers or Dementia Joe Biden
The leader of the UK’s official opposition party, Labour, Sir Kier SStarmer after a year of starring in a remake of The Invisible Man has finally decided to let us see who he is. Responding to remarks made by Home Secretary Priti Patel, SStarmer said education authorities should be allowed to use exclusion orders to stop anti-vaccine activists from protesting outside schools ... Continue reading >>>

Anyone Who Fancies A Bet Will Be Put On A Register, Just Like Sex Offenders.
In another signal that Boris Johnson's government has sold out to globalist ambitions and is lurching headlong towards fascism, The Information Commissioner’s Office has announced that as part of their pursuit of a Single View of the Customer (SVoC), they plan to create a database in which all “behavioural data” of people who enjoy a bet ...

Nine Scottish schools tell pupils to pay for lunch via FACIAL RECOGNITION as Scottish Nazi Party normalizes surveillance stateNine Scottish schools chosen to a pilot plan to introduce facial recognition technology for verification of children's school lunch payments, have launched this flagship policy of the governing Scottish Nationalis Party, claiming the system is faster and more hygienic, while failing to respond to critics who have raised the privacy issue posed by such intrusive technology ... Continue reading >>>

Goodbye Freedom, Hello Global Governance.
If at any time during the chaos the past eighteen months you have wondered what kind of idiots are running the world and have gleefully trashed economies, disrupted social and commercial life and stripped citizens of their rights and liberties only to bring us, in late October 2021, right back to where we were in late February 2020 when the words pandemic and COVID crept into our consciousness ...Continue reading >>>

Populist Politicians Threaten Legal Action Against Proposed Covid Passports
Spanish populist party VOX has threatened legal action against the Madrid government if the ruling coalition implements a so-called health passport scheme that would require proof of vaccination or a negative coronavirus test to enter certain businesses. The leader of VOX, Santiago Abascal, stated this week, that if the Madrid government wanted to introduce a health pass he and VOX would take the matter to court.

The cracks in European solidarity are growing deeper by the day as the coronavirus crisis threatens to split the bloc. The response of European leaders has varied from panic, as several member-states have takeen unilateral action including severe border closures, to a laissez - fair attidude, notably from France's idiot president Emmanuel Macron who favours total inaction, having said complacently that viruses don't recognise borders.
Posted by Boggart Blogger at 1:05 PM