University of London professor Angus Dalgleish, who co-authored a paper in summer 2020 after spotting "unique fingerprints" in Covid-19 samples that point to genetic manipulation, says that he's been the victim of a "disgusting whitewash," and that anyone suggesting a non-natural origin for Covid-19 has been silenced by peers.

"This goes back to the days of Copernicus and Galileo - it is the death of science," said the oncologist - who in 1984 discovered how HIV enters and kills cells.

Dalgleish's work was roundly rejected by a string of journalists before it was eventually published in a 'watered-down form,' according to the Express.

In February 2020, the Lancet had published a letter that “strongly condemned conspiracy theories” suggesting that Covid-19 does not have a natural origin. This highly influential letter – subsequently cited in thousands of scientific publications – was signed by 27 experts including Wellcome Trust head and former Sage member Sir Jeremy Farrar.

However, it has since emerged that two weeks before the letter was published, Sir Jeremy stated in private emails that some senior scientists believed a ‘likely explanation’ was that the virus was man-made. -Express

Indeed, Farrar led a February 1, 2020 teleconference (one day after Farrar emailed Anthony Fauci about a Zero Hedge article suggesting Covid may have come from the Wuhan Institute of Virology) - in which one virologist was "80 percent sure this thing had come out of a lab," with others sharing his view. 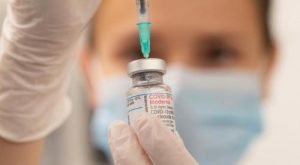 Since COVID-19 vaccines have been introduced in the United Kingdom, deaths in teenage males have skyrocketed. The deaths among males aged 15-19 have jumped 53 percent.

Even more disturbing is the fact that there have been noteworthy death spikes that directly correlate with the rollout of the first, second, and third doses of the injections for this age group. The only factor in these deaths were the COVID shots.

Data collected from the 2020 edition of “Deaths registered weekly in England and Wales” clearly shows periodic spikes in the death count right when each new injection was introduced. Once a fourth “booster” shot becomes available to young boys, we expect to see yet another death spike.

Suggesting Covid-19 vaccination may have in fact had a negative effect on the immune systems of the teenage boys, or deaths may have been misattributed as Covid-19 deaths, as has been so easily done since March 2020, to cover up the fact that the Covid-19 injections may have played a roll in the deaths. -Daily Expose UK Johnson also suggested that self-isolation rules may also be thrown out at the end of March as the CCP (Chinese Communist Party) virus pandemic becomes endemic.

Effective immediately, the UK government is no longer asking people to work from home.

The COVID pass mandate for nightclubs and large events won’t be renewed when it expires on Jan. 26.

And from Thursday, indoor mask-wearing will no longer be compulsory anywhere in England.

The requirement for secondary school pupils to wear masks during class and in communal areas will also be removed from the Department for Education’s national guidance.

Roaring cheers from lawmakers could be heard in the House of Commons following Johnson’s announcements on masks.

“The mRNA vaccines are extremely dangerous, in my opinion, and the technology is novel and untested,” Dr Seneff began her presentation, “today I want to focus on neurodegeneration and prion diseases.” Dr. Stephanie Seneff is a senior research scientist at MIT’s Computer Science and Artificial Intelligence Laboratory in Cambridge, Massachusetts, USA. Her recent interests have focused on the role of toxic chemicals and micronutrient deficiencies in health and disease, with a special emphasis on the pervasive herbicide, glyphosate, and the mineral, sulphur. During a presentation at a World Council for Health General Assembly Meeting earlier this month, Dr. Seneff explained that a natural infection starts in the nose and the lungs and usually will not get into general circulation if you have a healthy innate immune system. But the mRNA for the spike protein is injected into the muscles, by-passing the mucosal and vascular barriers. As well as entering other cells in the body, the immune cells also take up the mRNA and carry it to the lymph system and ultimately the spleen. Immune cells in the spleen then produce large quantities of spike protein on the surface of exosomes. These exosomes disperse throughout the body but especially to the brain along nerve fibres. An inflammatory response in the brain then produces neurological damage. The spike protein itself is a prion-like protein, Dr. Seneff said, it is worse in its prion-like characteristics than the prion protein that causes Alzheimer’s but not as bad as the human prion protein.

The pandemic has revealed the stark difference between how the public expects policy to be drawn up and how it actually appears. The quangos at the heart of this need to go, writes Jim McConalogue.

To rephrase an old adage, we might nowadays insist that we have not successfully rolled back the frontiers of the European state in Britain, only to see them re-imposed by the COVID-19 quangos. The point is brought home again, given that it seems clear we must review again the way in which government decides when to use quangos to deliver objectives – and if they can (at all) provide genuine public accountability.

The problem is that many of our quangos have been deciding on huge swathes of government policy yet remain insulated from parliament. It would serve the Cabinet Office well to review how it directs policy to enact law through such public bodies in a way that appears accountable to the electorate.

Similar to our 47-year experiment with European political, judicial and social integration, the uncontrolled growth of administrative power continues to raise serious doubts about whether we can work within our regular democratic practices, including the supreme role of parliament – as accountable to the public – in our governing arrangements. The promise of accountability has worn thin.

In the intense public debate on cutting the required isolation period to five days to ease pressure on the economy and vital services, it is notable that one of our own COVID-19 quangos – the UK Health Security Agency (UKHSA) – held that arguments on comparisons with the United States, where self-isolation has been cut to five days, were 'not like for like', but then found this position was not quite accurate. Their messaging (at that time) had been incorrect in portraying the US' self-isolation period beginning from the date of a positive test rather than from when symptoms first emerged, as it does in the UK.