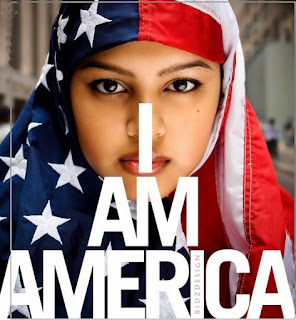 The Future of American Womanhood - I wouldn't kick her out of bed for farting, but I'd make damn sure she wasn't wearing a suicide vest before I got into bed next to her (Image source)
Many people (including Vladimir Putin) have in the past two or three years questioned the sanity of Brack Hussein Obama, though why the US President's love of terrorists, apparent hatred of America, and by extension all nations with a white or Chrstian majority and Obsessive Compulsive disorder when issues of gay rights, criminals rights and the rights of those who are determined to undermine the rule of law are discussed is well known.

Let's be honest, in his first campaign in 2008 Obama spelled out his love of terrorists, his contempt for the principles of western law (e.g. impartiality, he told us under his Presidency the justice system would favour minorities and those people 'liberals' consider disadvantages, rather than judging a case on its merits.

But people are waking up it seems, to the fact that having ignored the advice of Martin Luther King and judged Obama by the colour of his skin rather than the quality of his character (though the Prez - dude had his records sealed so nobody could inquire into the quality of his character)the USA has been torn apart by eight years of this man's incompetence, duplicity, bigotry, self interest, racism, and sedition.

Now Philip Haney, the US Homeland Security Department executive turned whistleblower, has written, from the perspective of an insider, an important op-ed for The Hill, warning of President Obama's misplaced priorities on national security. Haney says, "the Obama administration is more concerned with the rights of non-citizens in known Islamist groups than with the safety and security of the American people."


There are terrorists in our midst and they arrived here using legal means right under the noses of the federal law enforcement agencies whose mission is to stop them. That is not due to malfeasance or lack of effort on the part of these officers; it is due to the restrictions placed on them by the Obama administration.

He also reveals that not only did the Obama administration shut down an investigation that could have prevented the San Bernardino massacre, they went back and 'erased the dots' the investigators had 'diligently connected.' Worse, the DHS inspector general, the DHS and the Department of Justice subjected the investigaors to 'a series of investigations and adverse actions, including one by that same inspector general.'

It is now known that the San Bernadino massacre was the result of a long term plan by extremists to use the Obama administration's lax enforcement of immigration laws and determination to treat illegal immigrants as if they were 'natural born Americans' (now why might that be, do you think?)to infiltrate American society with jihadists who would eventually be called on to carry out terror attacks.

None of them [The DHS investigations] showed any wrongdoing; Hainey said they seemed aimed at stopping anybody from blowing the whistle on this problem.

Haney finally retired from government earlier this year, and is now taking his story to the American people.

Unfortunately, the Obama administration's "Countering Violent Extremism" (CVE) doctrine revealed as having been designed to shield Islam and Muslims from most scrutiny, while encouraging crackdowns on domestic (conservative) extremists.


The 'behavioral indicators' listed to help DHS agents identify potential terrorists include carrying around a copy of the US Constitution, promoting First and Second Amendment rights, having a Gadsden flag sticker on one’s car, and advocating for a minimal federal government.

CVE is thus designed to serve a dual purpose: (1) to protect Muslim Brotherhood organizations and their operatives who have penetrated federal, state, and local governments, and (2) to help the Obama administration crack down on its real enemies, domestic conservatives who want to re-establish constitutional governance.

Former Pentagon intelligence contractor Stephen Coughlin, whose specialty was "Islamic doctrine as it applies to 'Jihad' and the strategic objectives of our enemy," says that the scrubbing of the word 'Islam' from all government discourse was a long process that started at the end of the Bush years and accelerated under Obama. Bush of course, through his family business had links with a certain Saudi Arabian family named Bin Laden, while Obama has made his Muslim sympathies well known.

Obama To Visit London In Bid To Keep UK In The EU
The UK will vote in June on whether to remain part of the increasingly authoritarian, bureaucratically controlled trading bloc. Obama has said he wants Britain to stay in the EU and help maintain the post-war transatlantic partnership. Obama clearly thinksThe UK it would be in the USA's interests for Britain to be swallowed by the European Federal Superstate the bureaucratic dictatorship in Brussels are intent on creating ...

Did Saudi Arabia Just Announce Its Intention To Invade Iraq And Syria?