The FBI Has No Choice But To Indict Hillary Clinton 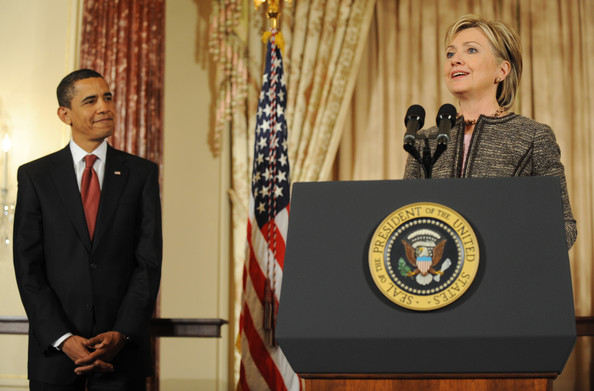 Potential United states President Hillary Clinton throws a hissy fit about the unfashionable beige curtains - her gay best friend (left) told her they are so last year (Image source)
Former Superior Court Judge Andrew Napolitano has published an article (linked below) which explains the FBI’s investigation of Hillary Clinton and concluded that the FBI has no alternative option than to indict Presidential hopeful Mrs. Clinton for failing to protect National Security during her spell as Secretary Of State. There are two aspects of the investigation. The original source of the investigation is the charge that she failed to safeguard national security secrets.

As the Judge explains, this crime does not require intent and can result from negligence or simply from an incompetent's lack of regard for protocols when dealing with classified material, as in the case that Judge Napolitano provides of the US Navy sailor who was prosecuted for espionage because a “selfie” he sent to his girlfriend revealed a sonar screen in the background. An even more egregious case is that of the US Marine who was prosecuted for using email to alert superiors to the presence of an Al-Quada operative inside a US military compound. The email is considered unsecure and thus the Marine was prosecuted for revealing a secret known only to himself.

In view of these unjustified prosecutions of US military personnel under the law as it still stands, the FBI has no alternative to recommending that Hillary be indicted. The charges may seem trumped up but the concern Ugly Face Hilly's slap dash approach to process and procedure raises concerns about how she would perform as President when people as sharp as vladimir Putin, Xi Jinping, Bashar al Assad, Recep Erdogan and Irans Ayatollahs are waiting to take advantage of every screw up.

Whether Hillary will be indicted depends on the Justice Department and the White House. Obama may feel he has done enough to derail Hillary's campaign and with only the buffoon Donald Trump and the communist Bernie Sanders as contenders could justify seeking emergency legislation that would permit him a third term Additionally, it is unlikely that either Wall Street or the military/security complex wants Hillary indicted as both have invested too much money in her presidential campaign, and both interest groups are more powerful than the Justice (sic) Department and the White House. Corporate America would fear a Sanders presidency more than Trump, but he is a loose cannon and so four more years of Obama would probably be preferable to both.

However, Even more people are concerned by Mrs. Clinton's complete lack of suitable experience to fit her for the job of running the country and given the ineptitude displayed during her tenure as Secretary of State they are riht to worry.