David Cameron denies migrant crisis is a 'giant David Icke conspiracy' to keep us in the EU.

David Icke replies that Cameron is a slimy, duplicitous lizard who is totally committed to the Illuminati's New World Order conspiracy. Game, set and match to Icke. 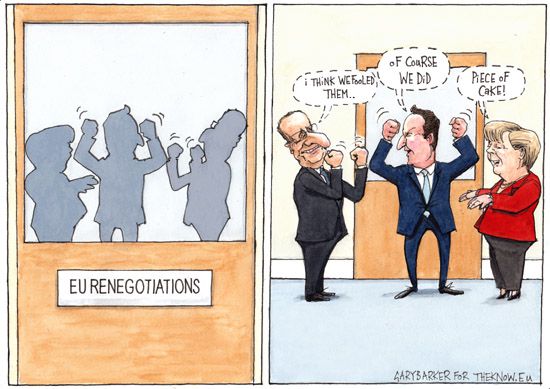 The Prime Minister's bordering - on - irrational defence of the scaremongering came as French President Francois Hollande warned of "consequences" if the UK decides to quit the 28-nation bloc at June's referendum. (Whatever consquences the French president thinks may be in store for Britain, they cannot be as bad as the consequences of the Hollande's Presidency have been for France

French economy minister Emmanuel Macron earlier suggested Britain quitting the EU could lead to Paris ripping up a 2003 deal which allows UK border guards to be stationed in Calais.

Thousands of migrants live in makeshift camps near the French port before trying to reach the UK.

But Mr Macron said of possible Brexit : "The day this relationship unravels, migrants will no longer be in Calais."

Asked if No 10 was trying to stitch-up the referendum with doomsday warnings from foreign governments and big business, Mr Cameron insisted: “When you have ministers in other governments warning about potential consequences that might happen, that would be injurious to the UK - I would say listen to those things."

Cameron is of course desperate to kerp us in the EU, he is a committed supporter of global government and the EU bureaucracy's dream of creating a Federal European Superstate is a big step towards fulfillment of that goal. So is Cameron playing for the New World Order or is it just another conspiracy theory. here's David Icke with the answer (scroll past the embed for my thoughts):


It can surely be taken as a sign that Cameron and his supporters sense they are losing the argument, that a "Remain" vote is not the foregone conclusion the Europhiles believed it would be when they granted us a referendum as a ploy to kill off UKIP. Since then the migrant crisis, the EU ruling bureaucracy's blind devotion to the warmongers of Washington as they push for war with Russia, and the continuing assaults on democracy and free speech by European national leaders, primarily Merkel and Hollande, combined with the ongoing economic crisis (coming soon to a nation near you if you happen to live in Italy) has made even more people that the EU’s project is part of a plan to create a meritocratic global government (The New World Order?) and UKIP are scoring even higher in opinion polls.
David Icke lambasts the Prime Minister's desperate attempts to score cheap points by sneering at Icke's eccentricity and replies with his version of what the EU amounts to. We’re pressing a nerve, Icke says with absolute accuracy. The Establishment are panicking as from Greece and Slovakia to Ireland people are turning against the bureaucratic dictatorship that has grown like a tumor in Brussels. Is there a conspiracy to end democracy and create a tyrannical global government?
People who suggest that say 'join up the dots', a phrase the sneerers have taken to ridiculing.

I say there is no need to join up the dots, if you've at least half a brain the big picture should be STARING YOU IN THE FUCKING FACE.

Globalization: The False Narrative and The Death Of Western Steel Industry

In popular perception, the downfall of the steel industry in Britain, Europe and the USA symbolizes the decline of manufacturing industry in the developed world more clearly than any other of the past half century's economic trends. Over the past few months in Britain two of the last remainings blast furnace steel manufacturing plant, Redcar in North East England and Port Talbot in South Wales have been in the news, both were threatened with closure, in both cases that would have had dire consequences for the local economies. Similar stories have been played out in Germany, France, Sweden, Italy and, most drastically in the USA where the area dubbed 'the rust belt ...

Britain's Choice: Democracy Or Eurocracy
Democracy in the European Union: The people = one vote, the bureaucracy = millions of votes - because, and I quote, "The people are not intelligent enough to understand complex issues". As we have commented before, it is not just a large section of British public opinion that want's to get our country out of Europe. Last week voters in The Netherlands voted by a big majority against the EU-Ukraine Association Agreement, which would be a step towards ...
French, Belgians, Dutch, Italians Follow Britain in Euroskepticism
Europeans want us British to lead them out of Europe. Don't be fooled by project fear, the European Union (aka the Euronazi Federal Superstate) is falling apart. There will not be chaos if we leave, there will be chaos if we stay.

EU Judges Could Throw Out Dave’s Deal, Say Independent Researchers
Now we learn that not only does Cameron’s give us no new terms and conditions at all, only clever wordplay, his agreement with the European Union (EU) could be thrown out by European judges, according to independent research by the House of Commons library.

Setting out his personal view, Longwoth said in his speech that “the very best place for the UK to be is in a reformed EU” but “I have come to the conclusion that the EU is incapable of meaningful reform, at least in the foreseeable future”.

Dutch Call for Major Reforms to EU Amid Rising Pressure to Break Brussels
The EU is in need of fundamental reforms because it is seen as too bureaucratic and lacking opportunity, according the Dutch Prime Minister Mark Rutte, who heads the rotating presidency of the EU, as he faces calls for his own nation to hold an In-Out referendum on EU membership.

Hollande Is Finished - So Is France

German Politician Predicts White Germans Will Be A Minority. Faces Calls to Quit.

Erika Steinbach, human rights spokesperson for Angela Merkel's CDU party, has been criticized after she posted a picture that appears to predict that in 14 years' time, white people will be in a minority in Germany. Steinbach faces criticism after she tweeted a picture with the caption 'Germany 2030' that depicts a crowd of dark-skinned people curiously asking a single white child where she is from.

Why Are Governments Scared Of Truth? France Begins Crackdown on Conspiracy Theories
We reported several weeks ago that the French government was planning a clampdown on conspiray theories by shutting down certain dissident websites. Since then we have learned the French government have shown they are prepared to go even further in attacking citizens right of free speech

Should Britain leave the EU and or remain and surrender even more of our national sovereighty to the unelected bureaucrats in Brussels. The campaign to keep us in the EU, led by Prime Minister David Cameron, has become know as Project Fear, the Europhile having only scaremongering argument to back their case. At the moment, due to the immigrant crisis caused by the Shengen Zone open borders area and 'open doors' immigration policy ...
After The Brexit The Frexit;1 in 3 French Voters Want Out Of The EU
EU Membership Vote in UK to Paralyze Decision Making
Europe index of posts