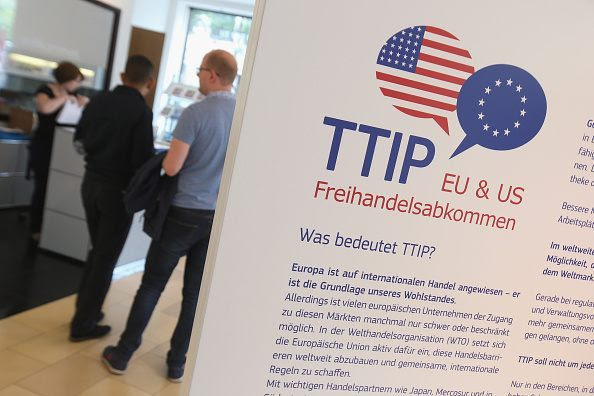 The text of the anti - democracy Trans-Atlantic Trade and Investment Partnership (TTIP) treaty will be held in a locked and heavily guarded room in Brussels to prevent certain core clauses (i.e. those that surrender the lawmaking abilities of sovereign nations to corporate lawyers) being leaked in advance of the final negotiations between Brussels and Washington D.C. Once TTIP is agreed that's it folks, there is no ratification process, no votes in national Parliaments, we will be subjects of a corporate / bureaucratic empire in which company profits will always outweigh the public interest.

The latest news follows Wikileaks posting an €100,000 bounty to anyone who is willing to leak the text of the legislation that will effectively enable the creation of a global totalitarian government. European Union critics have said since the TTIP project was announced that the treaty sold under the guise of transparency and democracy, but has not yet been seen by the outside world. Even our elected representatives are not allowed to know what is in it ahead of it's being signed off by EU bureaucrats and agents of the neo-fascist Obama administration in Washington.

Last month, EU Commissioner Cecilia Malmström blamed the U.S. government for the secrecy surrounding TTIP, but it is well known the Euronazis in Brussels are up to the same tricks. CorrectIV reports that a spokesman for the Malmström said: “This is not a step backwards for transparency in TTIP. We just do not want our negotiating position is weakened if confidential negotiating papers penetrate to the outside.” (This material is not available online - indeed many TTIP stories published online disappear very quickly).

German Euronazi parliamentarian Klaus Ernst remarked: “It should be understood that MEPs may view all documents. The EU Transparency PR is, against this background, just ridiculous.” A similar situation occurred in the United States recently, where the Trans-Pacific Partnership legislation was held in the basement of the Capitol building, in a secure, soundproof room.

Rep. Jeff Duncan (R-SC) blew the lid open on that piece of hypocritical shite in an article for Breitbart News last month, stating: “What is in this agreement known as TPP? I, as a United States Congressman, can read the negotiations.

“However, in order to read them, I must be in a classified reading room in the Capitol, sign a non-disclosure agreement which assures that I will not discuss the contents of what I have read, and I am allowed to take notes, but I have to leave them in the room.”

If effect then, the EU and The White House, having been embarrassed by reports of the secrecy surrounding TTIP are saying when our elected representatives ask what is in TTIP, "If we tell you that we will have to kill you." Well why not, plenty of independent minded journalists, academics, researchers and general awkward bastards have disappeared in mysterious circumstances in recent years. And that's entirely consistent with the way Nazi, Fascist and Socialist regimes work.

Last month the EU blamed the Americans for the lack of transparency, with Cecilia Malmström stating: “The Americans have a different tradition: they involve a very large group of about 5,000 people, [who have] received the documents. They will not be published. It is not in my power to publish US documents.” Which suggests the EU bureaucrats are not actually negotiating a deal on behalf on member states but having its terms and conditions dictated to them by the corporate lawyers drafted onto the team by the US Administration.

OK, so a lone Republican congressman in the USA and a few startup parties in Europe are speaking up in the public interest, but unless we want to live under a corporate / fascist regime we must all make our voices heard now.

TTIP Is Dead: Trade Talks Between EU And U.S. Have Collapsed, Germany Says

The Transatlantic Trade and Investment Partnership (TTIP) negotiations, the so called free trade deal between the EU and the USA, have collapsed, German’s economic minister has announced. The cause of the collapse has been cited as failure to move forward on any of the major planks of the deal, which has been dogged by controversy and widespread opposition from all sides of the political spectrum.

TTIP Set To Erode Democracy Further, Handing Veto On New Laws To Big Business
We do not yet fully understand what the 'deal' negotiated by David Cameron for revised terms of membership actually commit us to, but the general push by the bureaucratic dictatorship in Brussels to abolish the national sovereignty of member states and create a federal European Superstate is well known.


Get Ready For The Collapse Of The Global Economy
In the years we have been publishing, Daily Stirrer financial correspondent Phil T Looker has consistently predicted the refusal of the market rigging banksters to acknowledge that the developed worlds debt driven economy was FUBAR might delay the economic catastrophe but that would only make the final collapse worse when it eventually happened.

America going for global hegemony ahead of US$ collapse
The Free Trade conspiracy that spells the end of freedom
Global government? The Conspiracy Is Winning
Transatlantic fascism coming to an EU member near you