Tear Gas, Water Cannons Use By Police In Germany As Leftist Neo-Nazis, Riot 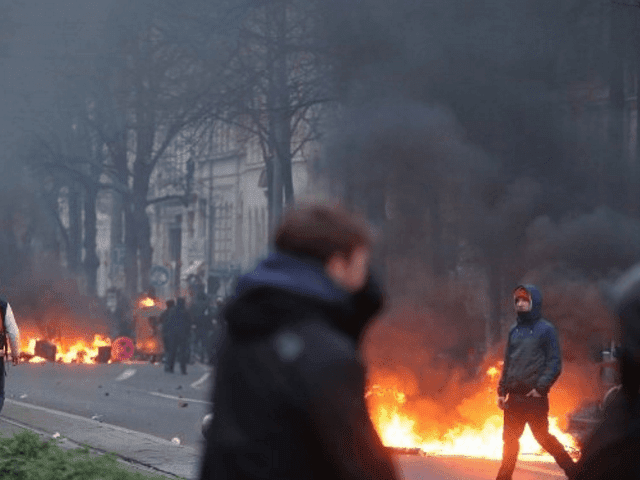 Protests by left wing trouble makers trying to halt a PEGIDA anti - immigrant march turned nasty when PEGIDA members continued their peaceful march after the demonstrators (who have no legal authority but only the authoritarian left's self righteousness to back them up) demanded that they disperse. For left wing nutters it is only ever a short step from screaming, with faces contorted with anger, vile and hate filled insults to throwing bricks and petrol bombs.

One thing you might have noticed if you’ve followed the short history of Germany’s migrant “miracle” is that citizens’ celebratory mood (characterized initially by the “sweets, toys, and hugs” refugees from Syria received upon arriving in Germany after completing the increasingly arduous Balkan route) has gradually been replaced by a creeping skepticism towards the asylum seekers and towards the “iron chancellor’s” open-door policy for refugees.

Just two days ago, we highlighted the following graphics from WSJ which has been called the scariest chart for Angela Merkel, (TIME magazine’s recently crowned person of the year - WTF were they thinking?):

Even before the Paris attacks that rocked the EU nations and awoke people to the fact that jihadists are arriving in europe and being welcomed as refugees or asylum seekers, the subsequent bomb scare in Hanover and the shootings in San Bernadion, USA, the tide of public opinion was turning against the hand wringing sentimentality of the leftist 'YTooman rights' brigade.

In Germany people had simply not understood what the sheer numbers of arrivals meant or how such low quality migrants would affect Germany's orderly society until they came face to face with the influx and started to read of rapes and violence committed by newly arrives 'refugees' who though they were coming to bring Europeans Sharia Law, forced marriage, ritual vagina mulitation and the civilized notion that it is OK to rape girls and women who go out without an accompanying male.

There are still large parts of the German electorate, the affluent professional and managerial class emotional cripples who only ever do anything in order to be seen doing it, that support Merkel’s 'open doors' approach, it’s simply to say that reality is beginning to sink in regarding what it means to take in one million people in the space of just six months even when you are a country whose entire population is 81 million. Think then how little Macedonia is faring as a tide of migrants lands on their shores, demanding shelter, food, warmth, free iPads and virgins (yes these cupid stunts are from such backward places they think any post pubescent girl who has not been sold into marriage is fair game.)

Some political groups in Germany have been against the open-door approach from the start. PEGIDA (which stands for Patriotic Europeans Against the Islamization of the West), has regained much if not all of the momentum the movement lost earlier this year when it's founder Lutz Bachmann posted a picture of himself dressed as Hitler on Facebook with the caption “He’s Back” (read more about recent PEGIDA rallies here).

On Saturday, we got the latest example of social and political unrest in Germany when an attempt by leftists to disrupt right wing demonstrations turned violent. As RT reports, “about 150 members of different far-right organizations marched through the southern part of Leipzig. They included the neo-Nazi party Die Rechte (the Right), xenophobic organization Offensive für Deutschland (OfD) (Offensive for Germany), and a division of the PEGIDA movement called Thugida.”

Things apparently turned ugly when rabid leftist protestant pastor and youth worker Lothar Konig, 61, showed up with his "loudspeaker van" and began to incite the brainwashed Marxist sheeple to violently break up the PEGIDA protest.

So, as is usually (invariably) the case in the UK it was not 'neo-Nazis' and 'right wing extremists' that started the violence but the loony left who have no logical argument to back up their Leninist dogma and so fall back on the politics of hate. The leftists would argue that any time neo-Nazis stage a march they're bound to cause trouble due simply to the fact that they identify which a movement that's had... how should we put this... a rather checkered history in Germany. This is bollocks of course, when the left's rent a mob start breaking up the peacful protests of organisations like PEGIDA, extremist groups are bound to oppose the left's traditional anti - democracy brutality.

It has now emerged that the majority of people arrested during the 'neo-Nazi' march in Leipzig, Germany on Saturday were left wing counter-demonstrators, who threw rocks and fireworks at police and lit fires in the street.

Around 150 PEGIDA supporters were met by many times more left wing and ‘anti-fascist’ protesters, possibly as many as 1000 who were screaming hate messages at the peaceful protestors. Police deployed around 800 officers to keep the mob away from the peaceful marchers.

An official statement said 69 police and several demonstrators were hurt during the weekend’s disturbances. About 50 police vehicles were also damaged and 23 arrests were made.

Left wing protestors set bins alight in the street in an attempt to blockade the route and stop the right wing march, and the majority of those throwing missiles at police were from the counter-demonstration.

"There are also other violations, but mainly it comes down to this charge,” police spokesperson Ricardo Schulz told Die Welt. “There are a number of proceedings against masked people who were throwing stones. This was an excess of violence."

As usual we see that while those called right-wing extremists, fascists and Nazis behave as civilized human beings should, the infantile thugs and bullies who style themselves 'liberal' or 'the left' behave in ways we associate with Hitler's Brownshirts or Sturmabteilung.

As the stituation in German society deteriorates each day due to the vast swarm of lawless, uneducated, infidel hating illegal Muslim immigrants that Housfrau Volksfuhrer invited to travel to Germany and replace the established population, social commentators are predicting the country will slide into civil unrest and possibly full scale conflict between supporters of immigration and patriotic Germans
Hausfrau Volksfuhrer Merkel Confronts Facebook's Zuckerberg Over Policing Hate Posts