To paraphrase Mark Twain, reports of Julian Assange's death were greatly exaggerated. After his web feed was cut by staff at the Ecuadorian Embassy earlier this week Assange's usual stream of tweets, leaks and posts was stilled. The web, being the web, went mad with conspiracy theories but Wikileaks themselves did not comment on the wilder speculation.

Well Julian is back on Hillary's case, and this time it's more personal than ever.

After consistently leaking damaging internal information from both the Democratic National Committee and the Hillary Clinton campaign on an almost daily basis for months, much of which provides evidence of criminal behavior sufficient to trigger a police investigation were anybody but a member of the Washington 'liberal' (née neocon) elite the chief suspect, but seemingly has no impact on the Mrs Clinton's ratings in the polls, Julian Assange has concluded that "There is no US election. There is power consolidation. Rigged primary,
rigged media and rigged 'pied piper' candidate drive consolidation."

Another way of looking at it is that Mrs. Clinton's continued involvement in the election race shows that to her supporters the fact that Hillary Clinton has a vagina (allegedly) is more important that evidence of her involvement in crime, ranging from high treason to cheating Bernie Sanders out of the nomination, or that her biggest campaign priomise and the one she is likely to keep is that she will seek war with Russia. This blog can't understand why the candidate's genitals should be a factor in the election. After all, in every election from 1988, Americans have voted to put a cunt in The White House. 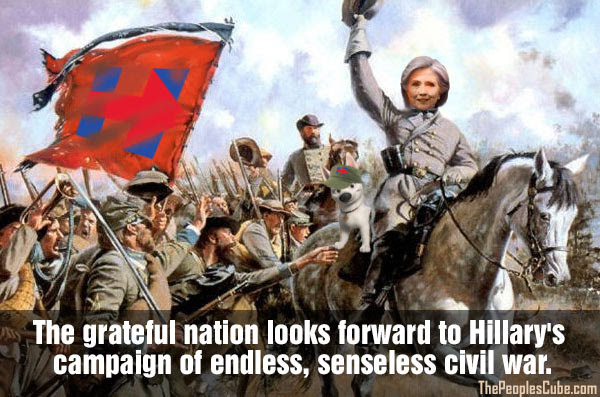 Image source: The Peoples Cube
It is difficult to disagree with Assange's assessment (or ours for that matter). That an establishment candidate, the ultimate Washington insider, running for The Democratic Party which claims it supports poor people and minorities, can still be in the race after an extended FBI investigation into a security scandal involving handling classified material on an unsecured private network that concluded multiple federal laws were clearly and intentionally broken by Mrs Clinton and her staff, and clear evidence that the decision not to prosecute was influenced by the intervention of President Barack Hussein Obama in what amounted to a gross abuse of power, is astounding. Equally astounding is that evidence of collusion between the Clinton Foundation and the State Department during the time Hillary Clinton was Secretary has not warranted an investigation. Throw in evidence from WikiLeaks clearly linking the DNC to criminal efforts to incite violence at rallies, electoral fraud during the Democratic Party primaries, contravention of electoral rules in accepting donations from foreign governments, blatant media collusion, etc, etc, and it actually becomes clear that The Obama Administration and the Democratic party (heavily influenced by the Clinton's have introduced levels of corruption normally found in third world failed states into the political system of the USA. 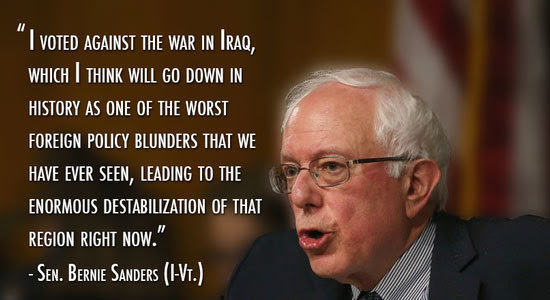 And, while no amount of corruption or scandal seems to sway an American electorate that is intent upon throwing the country off a cliff, Assange has promised a "surprise" for Tim Kaine and the Democrats' "persecuted christian woman", Donna Brazile who assumed the role of chair of the Democratic National Committee (as a thanks for helping Hillary stab Bernie Sanders in the back?) after her predecessor was made the patsy for Hillary's email treason.Let's hope that finally wakes up mainstream media to tell the truth about the election being rigged in favour of the Wall Street / Corporate / Military - Industrial complex candidate.

The real irony is that Hillary Clinton represents all of that which the 'liberals' of the 'progressive left' claim they hate most, yet still they support her because her vagina blinds them to the (not fit for purpose) quality of her character, just as eight years ago the colour of Obama's skin blinded mostly the same people to the fact that he was a plant who in office would be a neocon puppet.


RELATED POSTS:
The Birth Of Cultural Marxism
Ever wondered when and where the idiotic pseudo -philosophies of hippys and the idiotic and divisive politically correct dogmas of the modern left were born. The Social justice Warriors (aka 'liberals' or progressives' though they are really neither of these things but instead are moralistic authoritarians who hate free speech and personal liberty and support censorship, government control of media and criminalisation of dissent.

The woman is a phoney, a self interested, self aggrandizing elitist with a sense of entitlement the size of a galaxy. Whatever Hillary does, and whatever minority group the claims she is acting in the interests of, you can bet the main beneficiaries are Hillary Clinton, her family and her cronies.

Panama Papers: British Elite Linked to Corruption, yet Media Only Focuses on Putin
It is clear (and very easy to research) that many Amerocan elitists, including prominent political figures are involved in the Panama tax haven scandal. So why are British news organisations focusin on David Cameeron, the Conservatives and Vladimir Putin? Could it be the Gerge Soros funded group behaind the leaks have another agenda besides exposing (perfectly legal) tax avoidance?

Mac Slavo of SHTFplan.com Discovers Real Reason Why Trump Scares The Establishment
So if Trump is in fact as liberal as the corporate sock puppet Obama, what is it about him that has the ruling elite so scared the corporate owned mainstream media are resorting to desperate measures to discredit him while politicians plot increasing unfeasible ways to stop him becoming president.

Undemocratic Democrats – Nearly 10% Of Democratic Party Superdelegates Are Corporate Lobbyists
while I have been amused by the antics of the Republicans as they search for a way to stop Donal Trump, on the other side of the coin I have learned there is not alot about the Democratic Party that is actually democratic.
New Report Shows How Hillary Clinton Sold Obama on Regime Change in Libya
We have no compunction about lobbying against Hillary as responsible citizens of the world who put the interests of people in the USA, Europe and the third world ahead of the interests of a global wealthy elite who profit from war and are quite prepared to use financial muscle to make sure corporate profit wins out over public interest.

Mighty Trump Blows Off Rebublic Challengers
No surprises in the US Presidential primaries last night, but another chance to maintain my run of flatulence related headlines as Donald Trump continues to dominate the Republican contest.
From The Bloated Big State A Mighty Trump Burst Forth
America is being destroyed by Vic Damico
Detroit, the American Dystopia
American paranoia
Failure of American leadership
Obama's administration of bottom feeders
Obama's Big Brother society
Obama's jihad against civilisation
Obama creates an oppressive, tyrannical regime
Shakespeare's Proud Loner and The Wisdom Of Crowds
Hollywood Celebrities Who Are Not Hillary Fans
Watch or read mainstream news or get your info from celebrity gossip websites and you could be forgiven for believing that all media / showbiz celebs in the USA are devoted fans of the rent - boy president, Barack Hussein Obama and his anointed successor Hillary Clinton. It is not so ...