Another Foreign Policy triumph for the Obama Administration, not quite in the same league as Syria, Libya, Yemen or Ukraine but it could have far reaching consequences in the future.

After a long exchange of insults and negative comments with President Barack Hussein Obama and the US government, coupled with a pivot towards Beijing, it was only a matter of time before Philippine President Rodrigo Duterte put an end to the speculation and announced that in the future his country would consider China its main ally and trading partner and would wind down the country's long-standing diplomatic alliance with the USA.

Speaking during a visit to China's capital, Duterte today announced his "separation" from the United States, telling an audience of Chinese officials and businessmen he had realigned with China as the two agreed to resolve their South China Sea dispute through talks. 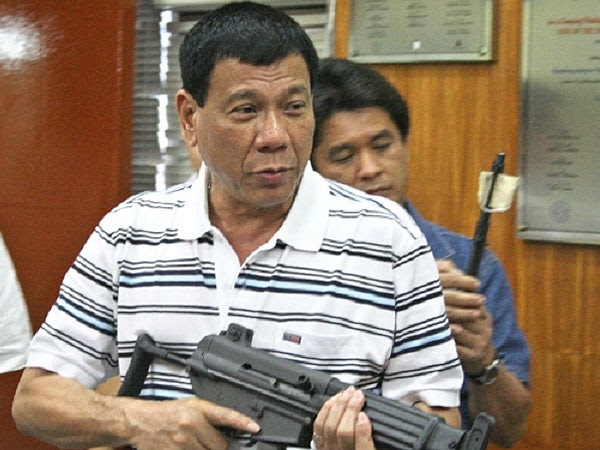 Rodrigo Duterte: casual closthes mask a combative attitude (Image source - globalnation.inquirer)
Duterte is in Beijing set up the political foundation for what he calls a new commercial alliance as relations with longtime ally Washington deteriorate He told his audience "In this venue, your honours, in this venue, I announce my separation from the United States,"

Duterte's announcement was applauded by Chinese and Philippine business people at a forum in the Great Hall of the People attended by Chinese Vice Premier Zhang Gaoli. "Both in military, not maybe social, but economics also. America has lost," Duterte added.

An even more dramatic admission came a few minutes later when Duterte also expressed his desire to expand the embryonic Asian axis to include Russia as well.

"I've realigned myself in your ideological flow and maybe I will also go to Russia to talk to (President Vladimir) Putin and tell him that there are three of us against the world - China, Philippines and Russia. It's the only way," Duterte told his Beijing audience. Iran might have something to say about that of course, but as India, Pakistan and Indonesia work on improving relations with Russia and China it looks like the end of the US global hegemony dream.

What's The Point Of G20 If The Children Will Not Play Nicely Together
The G20 summit in St Petersburg should be holding in depth discussions about global issues like Mutually Assured Destruction if America attacks Syria and Russia responds, Bee Apocalypse, Unemployment in the west, Hunger in the southern hemisphere, Same Sex Marriage, Miley Cyrus dry humping ...

China has the back door.
In the previous post I reported that Russia had stationed six warships in the Mediterranean, presumably to deter US / Israeli / European ambitions to install a puppet govErnment in Syria and open the back door for a western strike on Iran

Slowly We Edge Closer To War
Forget all the politicians blether about positive meetings with Russian leaders and resolution of the Syrian conflict. Steadily the lines are being drawn, the trenches are being dug and the body bags are being stitched. You will not read about in ...

So Much For Progress On Syria
After recent meetings with Russian leader Vladimir Putin, both USA Secretary of State John (Lurch) Kerry and UK Prime Minister David Cameron returned claiming they were more optimistic about replacing the regime of the Dictator Assad with a western style

Even the United Nations Knows Syrian Rebels Used Chemical Weapons So Why Is Obama Still Accusing Assad
Obama's latest war is bogged down in Syria, in spite of the USA being supported by usual suspects, the United Kingdom and France the phalanx of Syrian allies which inclueds Russia, Iran and China looks a bit too formidable to persuade the limp wristed one it is safe to invade or start bombing. So all he has is a war of words, and he's losing that.


China pledges to support North Korea against US aggression
Western media has focused entirely on the comical posturings of North Korean leader Fat Boy Kim during the recent escalation of tensions on the Korean peninsula. But a little research reveals that Korea is not the true driver of the situation. This is shaping up to be proxy war between the USA and China.

Even the United Nations Knows Syrian Rebels Used Chemical Weapons So Why Is Obama Still Accusing Assad
Obama's latest war is bogged down in Syria, in spite of the USA being supported by usual suspects, the United Kingdom and France the phalanx of Syrian allies which inclueds Russia, Iran and China looks a bit too formidable to persuade the limp wristed one it is safe to invade or start bombing. So all he has is a war of words, and he's losing that.


Fear and Panic: how To Create Threats and Enemies
Fear and panic has always been one of the most potent weapons of tyrants and wannabe tyrants. But in an world lacking enemies how do the elitists of the New World Order create enough fear and panic to persuade populations to surrender freedom and live under a global totalitarian government?

Will Globalists Use North Korea To Trigger Global Catastrophe?

Whenever discussion over North Korea arises in Western circles, it always seems to be accompanied by a strange mixture of sensationalism and indifference. The mainstream media consistently presents the communist nation as an immediate threat to U.S. national security, conjuring an endless number of ...


The Total Surveillance Society
Surveillance cameras, CCTV,electronic monitoring, data gathering from credit card use and other transactions, all are commonplace. When we start to hear talk of implanting RFID chips in human bodies or making a criminal offence of not carrying an official identity card when outside one's home, we start to understand how sinister the surveillance industry has become and what threats it poses to our rights and liberties.

Peacemaker and Joybringer Launches Another War
He promised he would be the peacemaker, the great conciliator, the leader who would usher in a new post - conflict global age. And may believed him. Oh how they mocked when I predicted Barack Hussein Obama would be a warmonger, a divider and more than any of his predecessors they lackey of the globalist bankers who are pushing for a global totalitarian government.

Poison Gas Used In Syria Sparks Calls For Western Military Invasion
Claims circulating in Washington, London and Brussels that chemical weapons have been used in the Syrian conflict have prompted less conspiracy theories and more intelligent discussion that we might expect. Even so commentators in mainstream media have divided into two opposing camps – those who believe that President Obama's failure to ...


An Islamic cleric has pronounced a fatwa that permits US-backed FSA rebels to rape non-Sunni women in Syria as part of a "sexual jihad" that has so far involved girls as young as 14 being transported to remote areas of the country to service the needs of ...