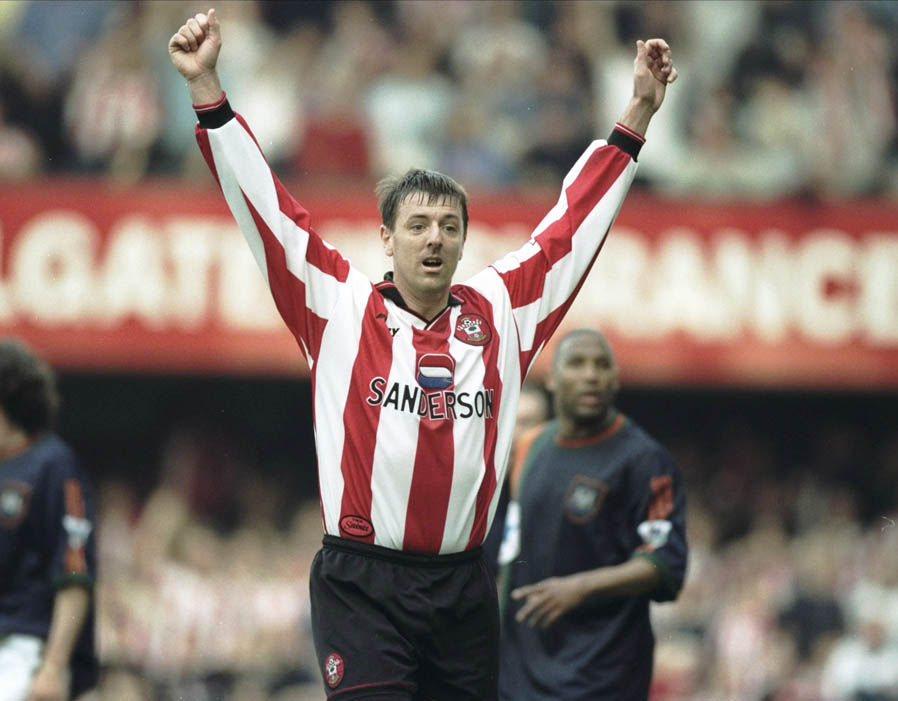 Former Southampton footballer and England international who recently courted controversy by expressing his concerns over the number of professional athletes who were falling ill with heart problems, and dying during competitive events in a few cases, after receiving their full complement of COVID vaccines, has upset the mob again.Le Tissier has resigned from his role as a club ambassador following a series of highly controversial postings referencing the Ukraine conflict on social media.

His former team were already unhappy about Le Tissier’s utterances on the controversial COVID-19 vaccines and felt the former England striker had crossed a line when he appeared to question war reports describing massacres in the town of Bucha, in Ukraine.

Under a picture grabbed from mainstream media purporting to show streets strewn with the bodies of Ukrainian civilians (though the visible shapes could have been anything because the image was so indistinct,) he retweeted a post claiming that the media had lied about weapons of mass destruction in Iraq, poison gas attacks in Syria, the genocide of Kurds, Yazidi and Druze in Syria by western back Islamic fundamentalists, Covid and “the Hunter Biden laptop” and then said, “But honestly they are telling the truth about Bucha!”

The post was met by the usual faux outrage from the propaganda - brainwashed 'woke' mob on Twitter and later deleted. Atrocities in Bucha have been reported extensively by numerous propaganda mouthpieces for globalist governments in broadcast and print media from across the world.

Although his resignation was not demanded, it is understood that Southampton have expressing concerns to Le Tissier about his social media postings since he questioned why professional footballers in the UK were 'taking the knee for Black Lives Matter, an openly racist political organisation. Southampton bosses claim all of these things had led to complaints from fans over the 53-year-old’s ongoing suitability for an ambassadorial role. If this is true Southampton must be the only team in England to attract a 'woke' crowd as most teams players were booed by fans for 'taking the knee,' there was widespread anger that during lockdowns, games had to be played behind closed doors.

Le Tissier’s stepped down from his role at the club on Wednesday, then posted a further series of messages on Twitter. “To all the fans of sfc,” Le Tissier tweeted. “I have decided to step aside from my role as an ambassador of SFC. My views are my own and always have been, and it’s important to take this step today to avoid any confusion.

“This does not affect my relationship with and love for my club, and I will always remain a fan and supporter of everything Saints. I can, however, see that due to recent events it’s important to separate the work I believe in from my relationship with the club I have supported and played for most of my life. I will see you all at St Mary’s and will always do anything I can to help the club.”

Le Tissier had also posted on Wednesday that he was anti-war. “I do not advocate anyone taking lives of others and anyone who commits such acts should be dealt with accordingly, any atrocities leave devastating effects on the families of the victims and us all,” he said.

In an interview earlier this year with Telegraph Sport, after losing his job as a Television football pundit, with Sky TV  Le Tissier said  he asked the company whether his sacking had "anything to do with my social media posts". He says that he was initially told that they had to be "concerned about the reputation of our company". Sky says that it was part of wider change to the show and nothing else.

His tweet was about doubting the honesty of the media reporting of Bucha due to the media's evident dishonesty when reporting about WMD in Iraq, Covid and Hunter Biden's laptop. There are plenty of people reading this blog who have called out the media's reporting of those issues.

Many people believe the Russians are committing war crimes in Ukraine, including in Mariupol and Bucha. But after the media's previous behaviour you can see why so many people are reluctant to take media reporting at face value. That seems to be the point LeTissier was making.The other point that needs to be made is that there is no longer room for diversity of opinion; Le Tissier did not actually say he did not believe it, only that one should not automatically take what is written or broadcast by news organisations as absolute truth. This was something I was taught by my dear old Dad, a newspaper reporter from the 1940s to 1970s.

It's a shame there is such a high degree of (apparent) conformity to prevailing orthodoxy required these days just to do a job. It was perhaps better in the medieval era when all the Church required was a once a year show at confession and communion and you were then free to get on with living life as you wished. How are we going to know who the loonies are when everyone is pretending to think the same thing in case they get cancelled for being off message.

Reading comment threads on this and other controversial topics these days one has to conclude mainstream news is mostly read or watched by humandroids who believe that if they ever question an official narrative the computer chip that connects them to mission control will be remotely disabled.
I too believe the Russians are committing war crimes in Ukraine. I believe the Ukrainians are too, and have been committing humanitarian crimes since 2014 in the Russian speaking areas to the east of their country.

Russia will do anything to justify its actions in Ukraine, Ukraine will do anything to draw NATO into the conflict this triggering a global and very likely nuclear conflict.
A wise person such as Mr. LeTissier should threat any information coming out of either of these governments with profound scepticism.

Having said that, Matt is certainly correct about Weapons of Mass Destruction, Covid and Hunter Bidens laptop isn't he? Why should we believe mainstream media when all we've had from them in recent years on any controversial issue is globalist propaganda. He's been cancelled because he had a different point of view to the media and the Woke Liberals and because he has defended his right to free speech.

Facebook admits to nearly as many fake or clone accounts as the U.S. population
Facebook founder Mark Zuckerberg likes to brag about the number of people who use his social media site. In fact it is clear as he talks big numbers about how many users the site boasts, that he thinks the world loves him for creating this technological wonder. He's wrong of course.

Lay Off Cambridge Analytica, Facebook Are The Evil Doers


Information Technology firm Cambridge Analytica are being attacked by the hysterical mainstream media mob for their alleged role in the alleged collusion between The Kremlin and Donald Trump to steal the US Presidency in 2016, and similar abuse of private date to influence the result of the Brexit vote. It should be Facebook under attack, Cambridge Analytica only took advantage of a deal Facebook offers on the open market ...

Trump blocks Sale Of US Tech Company To China

President Trump has reportedly blocked the attempted acquisitions of a US technology company by a Chinese firm. while his opponents accuse him of breaking election promises and betraying votes, although they offer little evidence to support their claims, the increasingly tough policy against China's acquisition of US companies continues, despite the firing of White House chief strategist Steve Bannon, who supported Trmp's "economic nationalism."


Trump blocks Sale Of US Tech Company To China


On Tuesday, Apple revealed their newest phone. The new line was anticipated by Apple users and is another cult favorite. But many are rightly skeptical of the “FaceID” feature.
FaceID, is a tool that would use facial recognition to identify individuals and unlock their phones for use. Unsurprisingly, this has generated some major anxiety about mass spying and privacy concerns. Retailers already have a desire for facial recognition technology.

Welcome to the Era of Artificial Intelligence and Technological Deceit
Pretty soon, computer wizardry and artificial intelligence will allow video footage to be created that is practically indiscernible from the real deal. Add holographic technology, and soon a person apparently be speaking live on screen and you’d never know it was fake. The ethical ramifications of AI and technology are simply mind-boggling.
WikiLeaks have today released documents from the Vault 7 cache, a group of leaked information which contains details on the CIA Angelfire spyware tool which was developed to facilitate loading and execution of implants targeting computers using Microsoft Windows operating systems.

Electrosensitivity - the Wi - Fi disease.
So you thought people who wear tinfoil hats are crazy conspiracy theorists? Not so fast there, some of them might actually be onto something.While these people are not tinfoil hat wearers either literally or in a metaphorical sense, the measures they take to avoid exposure to electromagnetic radiation (radio - activity) can seem rather paranoid until you know more about them.

Shock, Horror! Millennials Safe Space Violated As Facebook Algo Accident Exposes Them To Diverse Ideas Late last month (August 2016,) the Zuckerbugger's zoons put an algorithm in charge of the Facebook “trending” feature, to select the most popular topics, articles and keywords on the web in a narrow timeframe and with due respect for the 'safe space' of millenials who can be traumatised if they encounter microaggrrrrressions in the form of controversial ideas or unorthodox opinions ...

Government Paid Trolls Are Using 'Psychology-Based Influence Techniques' in Social Media
Have you ever come across someone on the Internet that you suspected was a paid government troll? Well, there is a very good chance that you were not imagining things. Thanks to Edward Snowden, we now have solid proof that paid government trolls are using “psychology-based influence techniques” on social media websites such as YouTube, Facebook and Twitter.

Zuckerberg reveals Facebook Working On Apps 'Smarter Than Humans'
In an online Question and Answer session this week Facebook supremo and founding megalomaniacal sociopath Mark Zuckerberg announced that his company is engaged in building AI systems "that are better than humans at our primary senses."